I’ll open with a confession: I don’t know where I’m going with this text. I usually start writing knowing what I want to say, and with a conclusion in mind. The conclusion is a destination. But not today. The thing is that it’s not just me – it’s the industry too. We don’t know where we are going, and that is the set up for a bankruptcy, a very disturbing thought.

It has yet to be published, but a major diamond company is apparently going down, becoming the latest bankruptcy in the industry. The size of its debts are unknown at this point, but the scale is understood – in the many tens of millions of dollars. The debts are said to be split about half and half between banks and the diamond industry.

The company is considered a well-established one, not known as a risk taker or as a company that pays exuberantly for its rough, and to me this is the most disconcerting aspect. A company that at least appeared to act prudently has taken a major hit. Not a reckless company, not one that gambled big on odd ventures, not a company that relied heavily on supplying goods on memo to American specialty retailers. None of these to my knowledge. Nobody ever spoke negatively about them. Just a “regular” company.

Manufacturers bought more rough, paid more for it, and sold less polished, at lower prices. As an economic concept, this is not a long-term business plan with any chance of success.

Traders in the market in which this company is based say they are already feeling the fallout from the latest bankrutcy: people are nervous, morale is plummeting, trust levels are low, and companies are being cautious in their dealings with other companies. The outcome is that payment terms on new transactions are shorter, liquidity in the market is an issue, and many are operating under the assumption that matters in that center will further deteriorate, as all are waiting to see just who will be affected.

In other diamond centers, traders are starting to express concerns too. One called the latest bankruptcy “a disaster” for the market.

The first concern is who will be hurt. If your suppliers hear that you are a creditor that may not get paid, they worry about you, view doing business with you as a risk, and act accordingly. They may charge more for the goods or trade only on a cash basis. That hurts an indebted company even further, exacerbating the situation. The bigger the fall, the larger the fallout.

So What Set Up the Latest Bankruptcy?

For some time, issues have been brewing in the market. For starters, polished diamond prices are continuously sliding downwards, as the Mercury Diamond, IDEX, and Rapaport indexes show.

Mercury’s MDGT is down for the 32nd consecutive month; at 118.96, the IDEX polished price index is at its lowest point since December 2010; and Rapaport states that prices of 1-carat rounds are down 7.1% year-over-year. The picture is clear.

Next, the level of demand from the consumer market is softening as well, which explains the decrease in prices. In turn, polished diamond inventories held by the mid-stream of the diamond pipeline are also an issue. According to data from Mercury Diamond (a client of mine), the volume of inventory of triple X, non fluorescent rounds has more than doubled since January 2016.

Based on my own tracking of the market of round-shaped diamonds, I see an increase of more than 37% in the quantity of diamonds held by the midstream compared to July 2016. Roughly speaking, this is a rise of a third in the amount of manufacturers’ capital that is tied to inventory.

While polished diamond prices are declining and inventories are rising, rough diamond supply is plowing ahead. ALROSA increased production during the first half of 2017, and the volume of sales rose, totaling $2.44 billion. 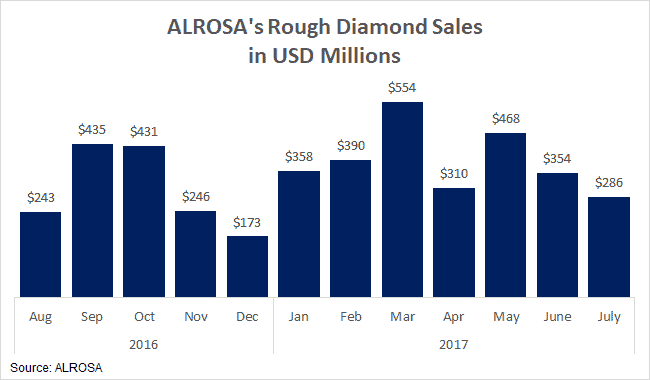 De Beers’ supply during the same six-month period increased, and their average rough price index rose 4% year-over-year. It should be noted that their total revenue decreased because of the mix of goods (more lower-cost items). That said, the value of sales during their last Sight increased 8% year-over-year. 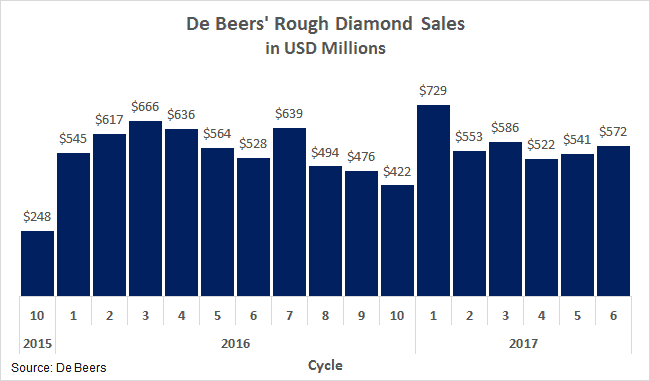 The bottom line is that diamond manufacturers bought more rough diamonds, paid more for the rough diamonds they purchased, and sold fewer polished diamonds at lower prices. As an economic concept, this is not a long-term business plan with any chance of success.

At De Beers Auction Sales, traders reported that goods were left on the table. This week, De Beers is holding Sight 7, and pre-Sight offers are reported at 4% below list price with payments at 60-90 days.

In addition, Okavango Diamonds and Mountain Province auctions are taking place this week, Rio Tinto’s sales week is starting on Thursday, and Stornoway auction is next week.

Then, during the week of September 11, ALROSA will hold its sales week. At this point, traders are not willing to pay much above list, but at 90 days payment terms.

Conclusions from the Latest Bankruptcy

One large company is already paying the price of the market’s odd economic behavior. A snowball effect of taking down a bunch of other companies (usually smaller ones) is a realistic expectation.

Small-scale diamond manufacturers, mainly in India, may be the big victims of the current situation. It depends on how larger manufacturers act.

As a lesson from the 2008 economic crisis, large manufacturers found that it makes more sense to outsource polishing when the need for more polished diamonds arises. This costs less than increasing their own manufacturing capacity, and it is cheaper when scaling down is needed – no layoffs on their books or idle machinery in the factories.

Small adjustments here and there won’t do. It is time for a major overhaul of the business model.

Large quantities of rough diamonds are being offered to this ill market. Considering the payment terms offered by traders so far, the midstream of the diamond market is already curbing its expenses. But this is a little too late.

Rough diamond purchases are to decline in the short term, both in total purchases and in price. In the longer term, a revival always happens. I’ll hinge it on the results of the Hong Kong September trade fair. A bad show will signal further cautious trading on the part of polished diamond traders. A decent show may provide an excuse to go out and buy rough.

So where we are going? Small adjustments here and there won’t do. It is time for a major overhaul of the business model.

The diamond industry must be much more demand oriented. Consumer demand needs to be improved. A certain level of consolidation in the midstream is called for. Miners will need to be more flexible.

Marketing, Sure – But of What Kind?
KP: Production Value Plunges, China Caves, and Manufacturers Focus
Comments 3