Not too long ago, I posted a question on Twitter, asking people what they thought was the average price of a diamond. Specifically, I wondered how much, in informed people’s opinion, was the average wholesale price per carat of polished diamonds. Just for fun, pick a figure before reading on, and keep it in mind.

In response to my question, I received replies from polished traders, rough diamond brokers, mining company reps, industry commentators and even a few people not directly involved in the diamond industry in any way – diamond industry observers at best. Some of these folks are very knowledgeable about the industry, and have an intimate familiarity with a wide range of industry figures (they even generate some of them in the course of their regular activities, such as in sales).

My own guess in answer to my question was a few hundred dollars. It was based on the understanding that there are a very large number of small diamonds with a low average price per carat, so much so that that they pull down the average diamond price to the point that they statistically dominant the entire figure.

Interestingly, most of the answers people gave were close to mine, and almost all of us were off the mark. The range of figures I got in reply was wide, and largely reflects the perception that most of the goods are low end (true), most are low color (also true) and most are small – below half a carat (true again). The figures ranged from $100 per carat (p/c) to well over $10,000 p/c.

So How Do You Figure Out the Average Price?

There are probably several ways to approach this question, and the following method is very reliable. It’s based on verified figures, well-researched data such as percent of gem-quality diamonds out of total mined production and polishing yield by manufacturers – the average weight of a polished diamond compared to the rough diamond it was polished from.

In 2013, the last year for which all the figures are available, the world’s global production of diamonds totaled 130,482,194.53 carats, according to the Kimberley Process (KP) Annual Global Summary report. 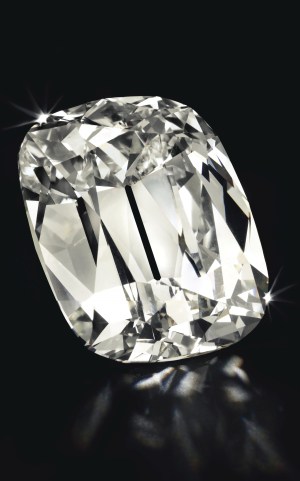 The global annual production of diamonds is divided into industrial grade and gem-quality rough diamonds. The ratio between these grades differs from mine to mine, from pipe to pipe and even within the same pipe. ALROSA, the world’s largest diamond producer by volume, reported that in 2013 and 2014 their sales (measured in carats) of gem-quality rough diamonds rose to 70% of total rough diamond sales, while in 2012, this figure stood at 67%.

According to Bain & Co.’s 2013 global diamond report Journey Through the Value Chain, about 55% of global production consists of gem-quality diamonds. This category actually contains a range of goods known as near gem-quality, which in the past did not qualify as gem-quality. However, over the years, these stones have been added to the supply of rough for setting in diamond jewelry. Thus, for our purposes of calculating the price of polished diamonds used in jewelry, the near gem-quality goods should be taken into account because they are in fact used in jewelry.

After establishing the quantity of rough used for polishing diamonds to be set in jewelry, let’s turn to manufacturing, the process of polishing rough diamonds. During the polishing process, some of the weight of the diamond is lost. This can typically vary from as little as 40% of the total weight (which means a 60% yield) to as much as 70% (a 30% yield). This depends not only on the shape of the rough diamond, but also on the shape of the polished diamond that the manufacturer decides to make – and usually involves a number of options.

Rough diamonds are divided into models – the shape of the rough stones. Sawables have a yield of about 45-60%, Makeables, a yield of about 35-45%, and low yield rough models such as Flats and Chips, 15-35%.

Normally, a manufacturer tries to get the best return on the cost of the rough stone, so the total value of the polished diamond may dictate what is polished – meaning that yield takes a lesser priority. According to manufacturers, on average, yield is estimated at about 40%.

Finally, the total value of polished diamonds churned out by the global industry is estimated at around $19-$22 billion annually. In 2013, this output was estimated by Chaim Even Zohar at $21.6 billion.

Calculating the Average Price of a Diamond

With these figures, we can now calculate the global average per carat based on the wholesale value of polished diamonds. If the annual global production of diamonds in 2013 totaled 130.5 million carats, and 55% of the volume of this production was gem-quality diamonds, than global production of gem-quality diamonds was 71.8 million carats. Of course, not everything taken out of the ground in a given year is sold during that year, however most of it is, and in the long run, all of it does sell, so this always evens out.

As stated above,  this output is valued at $21.6 billion. This is at wholesale prices, before branding, retail markup or even inner trade markup. Finally, dividing the value of output by its volume, we get the average per carat price of $752.

This is more than $100, a lot less than $10,000 and a lesson that your instinctive, gut feeling may sometimes be very wrong. See the breakdown below: 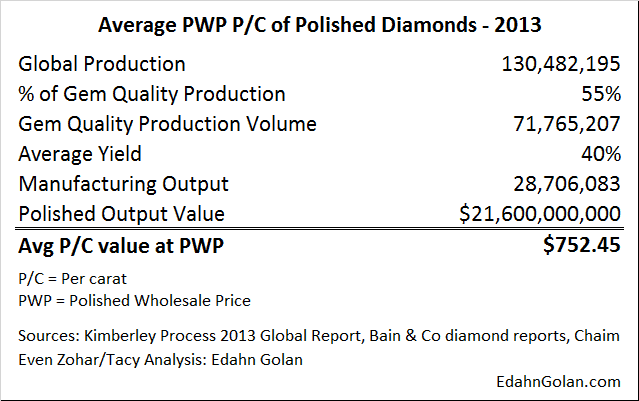 The figures above relate to 2013. The level of annual production, fluctuations in the level of percentage of gem-quality diamonds out of total production, how much of the production is sold, the amount of rough diamond inventory that eventually is polished, changes in technology that influence yield and prices paid for polished diamonds – all impact this average figure. This figure changes every year because these variables change every year. However, it does give you a good indication of the average price of polished diamonds.

Using historic figures, we can perform the same calculation for any recent year, including 2014, where a production estimate is needed because KP has not yet released the year’s production figures.

The consensus among most analysts is that with De Beers 5% increase in production in 2014, along with increased production by a few other miners (ALROSA’s production declined 2%, but sales volume increased 4%), rough diamond supply to manufacturers was about 133-135 million carats in 2014.

Are these figures correct? Are they at all in the ballpark? If you too thought that the average p/c figure should be around $250-$400, then these numbers may seem high. To double check, compare the average international trading values of polished diamonds by the main global diamond centers.

India, the world’s largest diamond manufacturing center and the source of most of the world’s supply of polished is also a supplier of lower cost goods. In 2014, the average value of gross polished diamond exports from India were $671 p/c, based on reported value and volume exports. Belgium, a source of higher cost diamonds, reported that the average price of its gross exports in 2014 was $2,006 p/c.

The Las Vegas shows are right around the corner, and expectations are very low. Retailers don’t want to buy merchandise, which may not move and tie up capital. This is  a worrying trend that, under certain circumstances, has the potential to disturb the industry for years to come. If that is how matters are developing, let’s hope that at least the outcome is change that results in a healthier industry.

Economic Indicators – Just What Are They Indicating?
Sight Okay, Retail Not at All
Comments 5