What is the volume of diamonds American specialty jewelry retailers sell every year? Are there pockets of opportunity within items that are losing favor? And how many lab-grown goods are really selling? More importantly, what is the sales pattern and trend?

One of the biggest issues in the diamond industry, especially in the manufacturing sector of the diamond pipeline, is a lack of impartial and detailed data about consumer purchasing habits. The need to bridge the gap between the information retailers supply in informal discussions (as well as the telltale sign of their purchases) and what US consumers actually buy is essential.

What Diamonds are US Consumers Buying Today? Market Overview

When comparing the trading activity during the first seven months of 2016 to the January–July period in 2015, we see that the total cost of goods purchased by retailers fell 8.6% to $3.97 billion, and the average value of wholesale purchases softened 0.6% to $2,421 p/c. At the same time, the total value of polished diamond sales declined by 7.1%, and the volume of sales fell 8% to 1.64 million carats. Within all these declines, there is one area where there was an increase: in the average value per carat of diamonds sold by retailers, which increased by nearly 1%. I believe the reason the average value of sold diamonds increased is first because of a shift in share between smaller goods and larger goods. The decline in the volume of sales of smaller goods under 0.90 carats compared to larger goods is very noticeable (see more on this here).

The second reason the average price of goods increased is because retailers acted to recover some of their lost revenues created by the decline in diamond sales. Wholesalers did not get a share of this pie, which retailers kept completely for themselves.

Round-shape diamonds are the most popular diamond shape among US consumers, representing more than 71% of all diamonds sold. Trailing this cut is princess and then far behind are ovals and cushions. Together, these four shapes represent some 92% of all diamonds sold in the US by specialty jewelers. All other shapes collectively represent only about 8% of sales by unit count.

During the January–July period of this year, sales of branded jewelry posted a double-digit increase of more than 12%, while sales of non-branded diamonds declined by nearly 6%.

Although the second most popular shape, demand for princess declined during the first seven months of 2016, losing 1% share of total and 9.7% in volume (measured in carats). Rounds’ share of the pie increased half a percent, but the volume of rounds declined 2.3%. 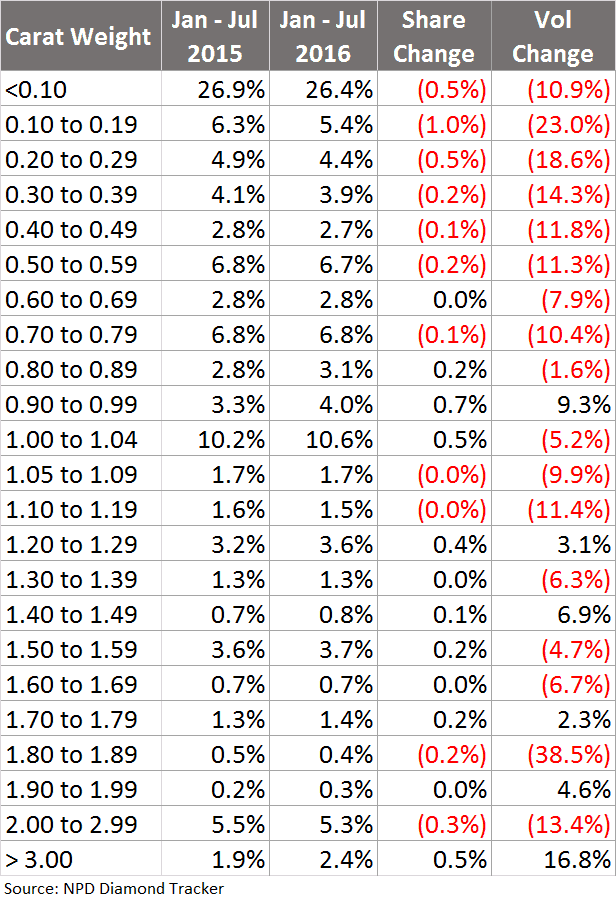 Slowly, erratically but continuously, the number of branded diamonds purchased by US consumers has increased over the past few years. From less than 5% share of total diamonds sold by specialty retailers in January 2015, growing to more than 7% in recent months, consumers are buying more branded diamonds. 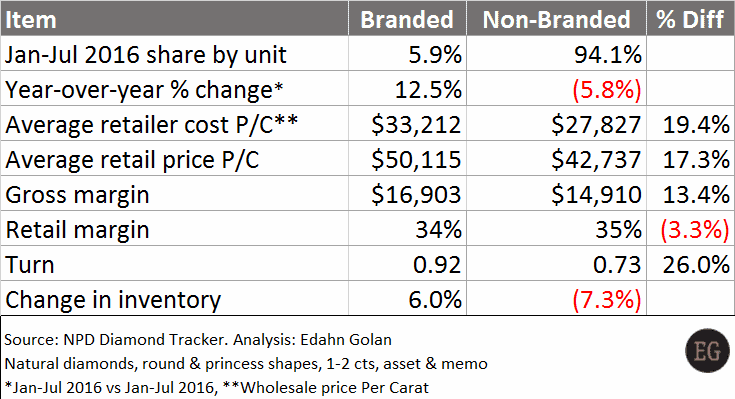 While averaging only 6% of sales during the January–July 2016 period, branded diamonds are set to take up a growing share of sales because they represent an area for wider gross margins for retailers, as well as being in rising demand by US consumers.

During the January–July period of this year, sales of branded jewelry posted a double-digit increase of more than 12%, while sales of non-branded diamonds declined by nearly 6%.

From a retailer’s perspective, this is an important opportunity to improve sales at a time when fears that purchases by 25–35-year-olds are diminishing. There is growing evidence that when uncertain about a purchase, Millennials will turn to a brand despite their jaded view of marketing. In addition, a returned focus of the diamond industry to marketing by firms such as Signet are improving brand awareness and broad demographic consumer interest in diamond jewelry.

The gross margin return on branded diamonds per annum is higher due to a much faster turn.

Clearly, a wise retailer should have a preference for branded diamonds, and it is therefore no surprise that retailers are indeed increasing the number of branded items in their inventory at the expense of non-branded items, up 6% in July compared to January. 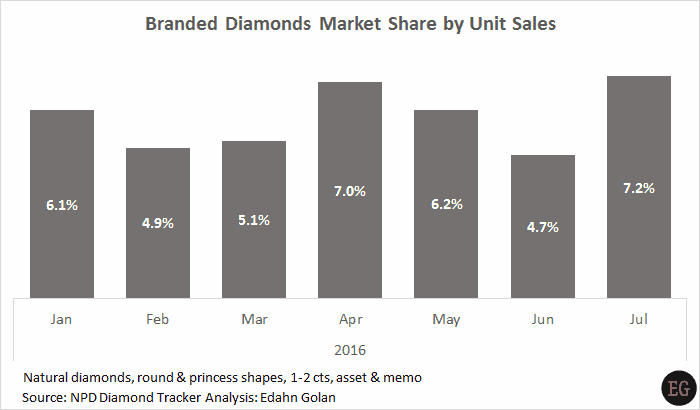 Much can be said about the growing presence of lab-grown goods in the marketplace, about their marketing, issues of disclosure, differentiation of natural diamonds to further define their space and even to what degree the traditional diamond pipeline should or should not be involved in the trade of lab-growns. The prevalent sentiment on the part of many traders is that the so-called “synthetics” must be blocked at all cost. That ship, however, has sailed.

Consumers today are already aware of lab-grown stones, and there are an increasing number of producers growing these goods. In the past year, it became clear that more and more US retailers that were at first dead set against lab-growns have changed their mind and are now focused on following their clients’ lead. Which begs the question: Just how interested are American consumers in lab-grown diamonds, or more importantly, how many of these goods are they actually buying, and how much do they represent out of total diamond sales? 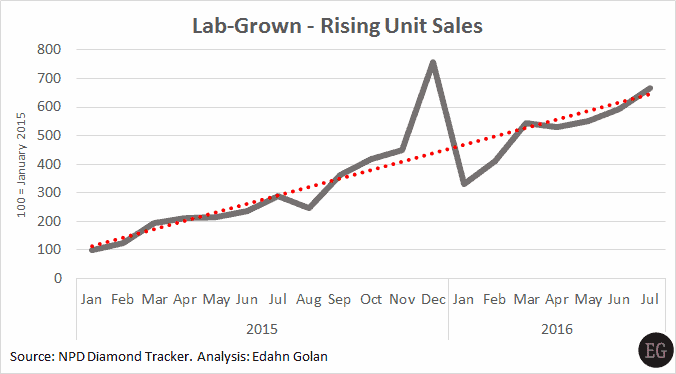 There is something possibly misleading in the above graph. Diamond sales are cyclical, and a rise in December indicates overall holiday demand, not necessarily a peak in interest in lab-grown. From a natural diamond business perspective, it is of importance to know just how cannibalistic is the lab-grown niche.

In July, US consumers purchased double the number of lab-grown goods that they had in January 2016, and that trend is continuing.

Consumer demand started out as very limited. In January 2015, sales of lab-grown goods represented less than a quarter of a percent of total loose and mounted diamond sales by US specialty jewelry retailers. However, as the months went by, relatively more items were purchased by consumers.

In January 2016, the market share quadrupled, and for the first time crossed the 1% mark. The growth trend continued, and during July of this year, market share of lab-grown goods surpassed 1.6%. Based on August trends, it is not unreasonable to expect market share to double again by the end of the year. 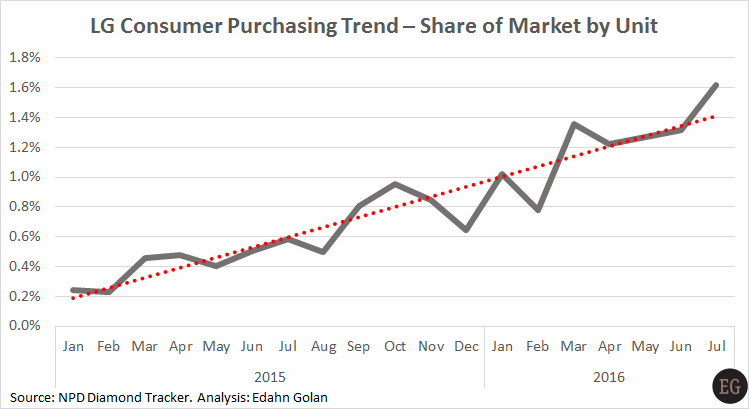 This analysis is based on a presentation given last week (October 20, 2016) at the Bharat Diamond Bourse in Mumbai on behalf of NPD, a retail metrics research firm that is collecting data from US specialty jewelry retailers on actual diamond performance.