Diamond import and export figures can tell a story, and a good story sparkles with oddities. Good stories start with facts that raise questions. In this case, the question is why a consumer market would import eight times the amount of diamonds it consumes. Or how a country with no diamond mining might export more rough than it imports.

First, the facts: According to the US International Trade Commission, gross polished diamond imports totaled $21.67 billion in 2017. The volume of imports was 9.9 million carats. This is a 3% decline in value and a 10.4% decline in volume compared to 2016. The gross imports averaged $2,190 per carat, an 8.2% year-over-year increase.

Polished diamond exports also declined: 10.5 million carats worth $18 billion, a 4.4% decline by value and 5.8% by volume. The trend in the past few years is that imports of loose diamonds are shrinking in value and volume, while exports are seesawing.

While the US imported polished diamonds from 82 different countries, four of these alone were the source of 91% of gross imports by value: India, Israel, Belgium, and South Africa. Two of the four, India and Belgium, lost market share, while Israel increased its market share. 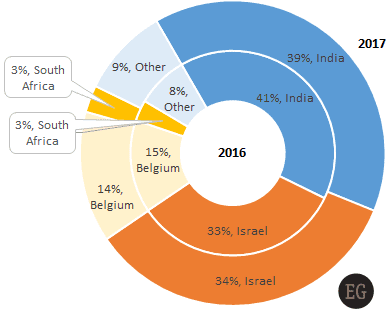 The odd trend to pay attention to is that of net imports. Whereas the value of net imports was $3.65 billion, the volume of imports had a negative value of -596,822 carats in 2017. How can a consumer market export more goods than it imports?

The decline in desire to pick out a diamond and set it in a jewelry item of choice is an indication that American consumers are losing their appetite for diamonds. And that is the important takeaway from these figures.

This is not an issue of a surplus from past years. In fact, this is anything but uncharacteristic. Ever since 2004, the US has been exporting more polished diamonds than it imports. The total volume of these over-exports is 85.6 million carats throughout the 14-year period. Polished diamond exports exceeded imports during every single one of these years.

One possible explanation is that the US International Trade Commission is getting it wrong. Maybe, but this body is an independent, quasi-judicial Federal agency with broad investigative responsibilities on matters of trade. Its mission is to (1) administer US trade remedy laws within its mandate in a fair and objective manner; (2) provide the President, USTR, and Congress with independent analysis, information, and support on matters of tariffs, international trade, and US competitiveness; and (3) maintain the Harmonized Tariff Schedule of the United States (HTS). This is a serious body.

Perhaps customs is not reporting it accurately. However, a long-lasting inaccuracy is not an error. It is a trend. Another possibility is smuggling. A large volume of polished diamonds smuggled into the US could account for export oddities.

In 2017, the US imported a record $1.01 billion worth of rough diamonds. In contrast, the volume of imports were a low 587,016 carats, way below the average import levels of the past 15 years. Gross rough diamond imports increased 23.3% by value and decreased 4.7% by volume.

The odd trend to pay attention to is that of net imports. How can a consumer market export more goods than it imports?

This is not entirely surprising. The decline in volume is a result of the decline in diamond polishing in the US. Once a major diamond manufacturing center, American polishers lost their competitiveness to lower labor-cost countries such as India – just as Belgium and Israel lost their prominence in the field. And like Belgium and Israel, US manufacturers focus on high-value diamonds where labor is a small (and at times negligible) component of the cost of the resulting polished diamond.

The shift to higher-value diamonds partially explains the ongoing rise in total value of gross imports, as well as the rising average value of rough diamonds. In 2017, the average per-carat value of gross rough diamond imports reached a record $1,806 per carat, up 29.4% year-over-year.

Five Years of US Rough Diamond Trade by Value

The rise in imports follows an ongoing rise in exports. The US exported $937.8 million worth of rough diamonds, in 2017. The volume of exports was 1.8 million carats. Year-over-year, exports rose 55.7% by value and a staggering 343% by volume.

For the past two years, the leading rough diamond supplier by value to the US has been Botswana, dethroning longtime leading supplier South Africa. Botswana was the source of $629 million worth of rough, nearly double its supply in 2016. 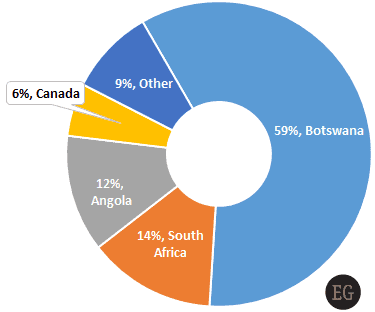 The top four countries supplying rough diamonds to the US accounted for 91% of total supply by value, up from 86% that the top suppliers held in 2016. Another notable change is the drop in Angola’s supply, down 43% year-over-year. This could be due to internal changes in personal in Angola’s diamond industry and a reshuffling that is taking place in the wake of President José Eduardo dos Santos stepping down. 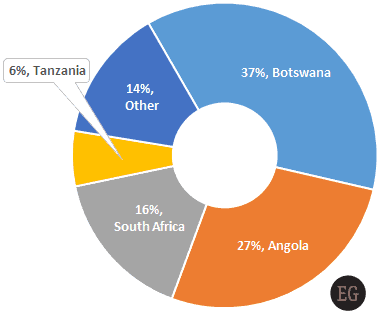 The net effect of rising imports and exports is an ongoing trend of dwindling net imports by value. However, net trade in volume is once again negative – 1.2 million carats. In the past 15 years, the US tended to export more rough diamonds than it imported – and the US is not a diamond producing country – at least in terms of diamond mines because the amount of rough may indicate that American ingenuity created a new source of diamonds.

Where are all that rough diamonds coming from? Why are so many rough diamonds entering the country in the first place? Does the US have a secret diamond mine? Is this an issue of poor tracking or even signs of money laundering? Be that as it may, this is an ongoing issue that needs to be addressed.

Five Years of US Rough Diamond Trade by Volume

Loss of Desire for Diamonds

However the oddities are explained, the US is a market in constant change. The decline in imports of loose polished diamonds means that less diamond setting is taking place in the US. Some of it has to do with the decline in diamond jewelry manufacturing. But some of it has to do with the shift in American taste. The decline in desire to pick out a diamond and set it in a jewelry item of choice is an indication that American consumers are losing their appetite for diamonds. And that is the important takeaway from these figures.

Alongside marketing to turn this tide around, the US diamond industry needs to urgently address the issue of over-exports. If it is seen with both rough and polished diamonds over an extended period of time, with goods tracked by different government agencies, than this is not a fluke nor an error. It is a problem. This problem needs to be worked out before US consumers turn a cold shoulder to diamonds because they suspect foul play in their own backyard.