There is a wide range of estimates about the value of the goods De Beers offered this cycle. Be it $350 or $500 million, very little was purchased. A current estimate puts actual purchases by Sightholders at $150-$200 million, underscoring that the diamond industry is not seeking rough.

No Need for More Rough, At Least 50% Refusals

Broadly speaking, prices and assortments were unchanged from the previous Sight held in August, remaining steady. However, since then, sales of polished diamonds have not improved, and their prices have declined without rough diamond prices catching up. Sightholders stated this week that another 10%-20% price reduction is needed to make the rough goods economical.

According to a few estimates, prices of 1-carat round polished diamonds declined overall by more than one percent in September, after the declines in August.

Many of the 2.5-4 carat boxes and the melee were refused, according to Sightholders and others, while the goods that were taken were characterized as low cost – as opposed to low priced – items. These are not goods that are necessarily profitable, but rather items that will result in lower losses. They were purchased to keep work going at the factories.

Very little ex-plan goods were taken, sealing the understanding that at this time, the mid-stream of the diamond industry has no need for more rough.

It may sound a little gossipy, but it must be said: Sightholders’ mood at the Sight and around it hit rock bottom. You heard it from all directions. One used the term “catastrophe” when describing the situation. It’s not that Sightholders are merely depressed, they are nearly apathetic, and that is not a healthy situation.

At the same time, their large-scale refusals indicate that they feel they can force De Beers’ hand. They don’t want the goods at their current prices and are willing to refuse massive amounts of rough until the price is right. That is a huge change from their attitude from just one year ago, and it is an ongoing one.

It must be noted that the issue is not simply one of Sightholders and their relationship with De Beers. This industry-wide issue goes far beyond one supplier and its clients. The worse that can be said about De Beers is that its prices are too high and that it responded late to the crisis. A market correction will take place; it always does.

Trading in the secondary market is very limited, estimated at a few thousand dollars per transaction. Inventories are still high along the diamond pipeline, and despite the positive reports about the US jewelry market, polished diamond wholesalers in New York, Mumbai and Antwerp are reporting very slow business with American retailers. This is especially concerning considering that now is the time for retailers to stock up before the important November–December holiday season.

From a manufacturer’s perspective, even if rough diamond prices were reduced considerably, to whom are they going to sell the polished? So the problem is not just prices, or a glut of goods or even a bottleneck at some stage or another – the underlying issue is consumer demand.

What Change are Sightholders Looking for?

With all the negative sentiment – both micro and macro – there are specific steps that Sightholders would like to see De Beers take in the immediate future. First on the list is a further price reduction of at least 10%, with some saying as much as 20%. I guess the difference in the depth of price reduction is more a matter of which rough goods we are talking about and the polished diamonds they result in. 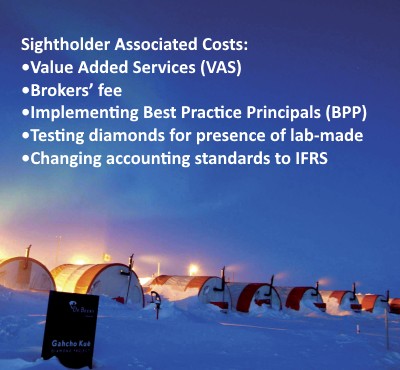 When evaluating prices of rough diamonds offered by De Beers, there are a range of expenses that need to be taken into account that are not usually found when buying from other sources.

They include Value Added Services (VAS), an added 1.5% to the cost; a 1% brokers’ fee; the cost of implementing Best Practice Principals (BPP); the cost of changing accounting standards to IFRS auditing and more.

In addition, Sightholders are required by De Beers to test their rough and polished goods for the presence of lab-made diamonds. These extra costs add up and are only a part of the cost of doing business with De Beers; therefore, Sightholders want the cost of rough to take this into account.

Second, Sightholders are looking for smaller allocations. As noted above, there are large inventories, and very few shortages in polished. Thus, refusals are high. By the way, refusals do not always need to be viewed in a negative light. Indeed, a smart salesperson should offer clients a wide range of options to choose from. In this case, Sightholders should act with foresight and pick only the goods they are interested in.

Finally, Sightholders are also asking for better assortments. De Beers is famous for its very precise assortments. As the diamond miner slows down its operations in response to the market conditions, it may have less flexibility in doing so.

In 2014, De Beers’ diamond production totaled 32.6 million carats. For 2015, it forecast production at 32-34 million carats, later reducing it to 29-31 million carats, a planned reduction of about 9%. Yet, if clients are asking for it, and several have expressed that thought in the past few weeks, it is certainly a brewing issue.

That De Beers’ reportedly sold a large amount of rough diamonds to a few Sightholders not through the Sight is still reverberating on the market. According to this account, De Beers sold the goods below its list price, generating needed cash flow for itself. The criticism is that when sold in the secondary market, these goods were still priced below De Beers’ list prices.

This action created an expectation for further price reduction (and contributed to the poor reception to the unchanged prices at the Sight), as well as raised a few questions. First among them, will De Beers repeat the move in the coming weeks? If so, it is worth holding off Sight purchases and waiting. As one insider commented, selling [the estimated] $50-$75 million of goods was enough to prevent De Beers from selling $300 million at the Sight… 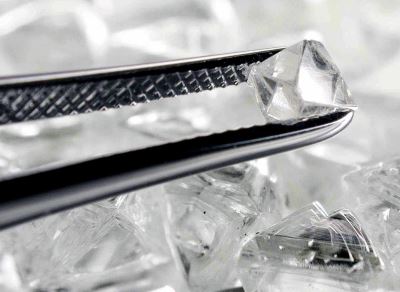 If De Beers sold goods to Sightholders outside of the Sight, circumventing brokers and their 1% fee (and probably VAS as well), for a large discount – some argue that the company understands that prices are too high and a reduction is required to generate sales.

There are at least a few Sightholders that feel that De Beers should have offered the goods as part of the Sight, at the discounted prices, reflecting their current value. Going that way would have at least spared them the noise and negative sentiment that the off-Sight route generated. From a Sightholder perspective, De Beers has exhibited a weakness, and they were very quick to smell it.

The next Sight, Sight 9, will be held in November, just before Diwali and the holiday vacations in India. Historically, this is a small Sight, and this year will be no different. Sightholders were offered to re-plan the last six Sights of their ITO, with one limitation – half of the goods are to be delivered in 2015 (Sights 8-10) and half in 2016 (Sights 1-3).

Considering the size of allocations last week and the small Sight expected in November, the December Sight is planned to be a large one, even though December is a slow month for manufacturers waiting to see the outcome of the holiday season. What wasn’t asked for Sights 8 and 9 remains for Sight 10.

However, Sightholders are counting on an option to delay goods from December to January. At this point, this looks like a series of technical ways to simply say: there is not such a need for rough diamond supplies for the rest of the year. 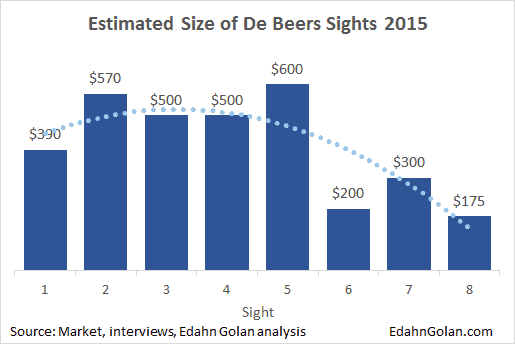 The interesting question is what will happen when the situation improves. Sightholders claim they have learned their lesson, changed their ways and won’t buy rough at the Sights just for the sake of satisfying De Beers’ will or to demonstrate financial might. They now buy only when it makes economic sense.

I fear the following future scenario: when the market improves (and have no doubt, it will eventually improve), demand for rough will rise, and it won’t be long before a shortage in certain rough goods will develop. At that point, Sightholders will be willing to pay high for these goods, and in the secondary market, some will be willing to pay even more.

That will bring us back to the days when Sightholders sold boxes during or even before the Sight for a hefty premium. This is a bad scenario because De Beers will very quickly identify these premiums and raise prices to keep that extra money for itself. Once again, this means high prices that spiral out of control – and out of manufacturing sense.

There is great temptation for Sightholders to make these quick and handsome profits, eliminating the risk of making a lesser profit if they polish the goods. They will need to display great restraint for the longer-term health of their business, or risk constantly battling eroding margins.

Waddling Forward, Will Sight 9 Total Less than $100 Million?
This Just In: Jewelry Retail Sales Are Improving