For several years, the diamond industry has been grappling with the introduction of gem-quality lab-grown goods to the consumer market. However, even with all the talk, one essential component seems to be missing – hard numbers. Just how many such items were bought by consumers, in what sizes and shapes, in what sales patterns, and most importantly, what do they represent in terms of share of market?

These are essential questions that need to be answered because otherwise how would the natural diamond industry know what it’s facing? If we are to accept it as a given that lab-grown gems are here to stay (and that is indeed the case), then diamond miners, manufacturers, jewelry makers and retailers need to have some basic numbers on hand to understand and plan ahead for this new consumer product.

Lab-Grown Sales in the US: Source of Data

For the past two-and-half years, I have been consulting retail metrics firm NPD on a new project: Diamond Tracker. Launched just a week ago, the service gathers data from a representative cross section of US specialty jewelers, 3,950 doors in total. Collected on a monthly basis, the data is a snapshot of these retailers’ activities in the past month, taken from their store management software systems and provides a transparent data set for all their diamond sales, purchasing and inventory.

The data is very granular and includes minute details about the diamonds themselves – such as fluorescence, cut grade, and diamond type, as well as the 4Cs – in addition to cost, price and lab, among others.

The typical loose lab-grown diamond purchased by consumers in the US was a one carat, Round-shape, J/SI1.

The following figures are taken from this service. They represent all loose diamond business activity at US specialty jewelers during the period from January 2015 to January 2016. These loose goods are typically set in jewelry in the store, as center stones in a ring, for example. This is an important point because the following data often does not reflect lab-grown stones set in jewelry by the jewelry manufacturer. Also, it is important because it reflects a conscious choice by the consumer, who given the option of choosing a natural diamond or lab-grown, picked the latter.

The Lab-Grown Consumer Numbers You Need to Know: What Consumers Bought

The width and breadth of consumer purchases of lab-grown are not very wide, in fact, they are surprisingly narrow. They include a very limited range of sizes, very few shapes, focused mainly on a very particular color/clarity category with little variation from it.

In terms of size, the lab-grown goods sold during the 13-month period were between 0.50-2 carats. However, a few larger stones were sold as well. This is the mainstay of sales by specialty retailers of diamonds to be set in jewelry. Overall, retail sales of diamonds (natural and lab-grown) centered on 1-carat goods, which makes the breakdown of lab-grown sales by size fairly typical of the US market. 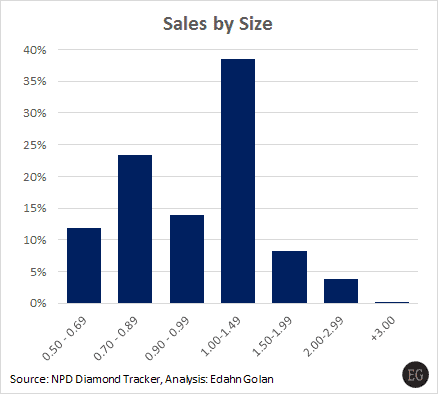 The most popular diamond shape among American consumers was Round, about 65% of the total, followed by Princess, roughly 14% of all sales, or about 80% combined. For lab-grown, the dominance of Round and Princess shapes was even greater, nearly 100%. According to our data, the third most popular shape (if the term popular could be used here at all) was Emerald, which represented only about 1.5% of all lab-grown sales.

The is an extreme variation of the overall trend, with Cushion-shaped lab-grown, which had a good run in the past couple of years for natural diamonds, selling in very few instances in the US market in 2015. 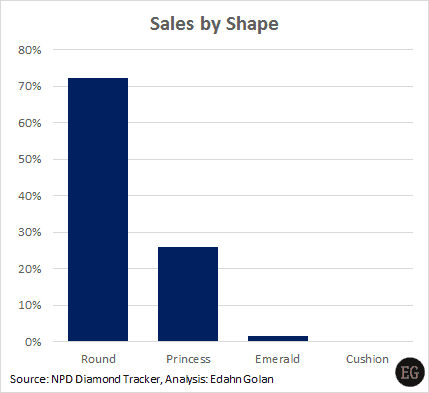 A few other characteristics of loose lab-grown goods sold during the 13-month period were rather surprising as well. More than a third were J color, and nearly a third were SI1 clarity.

When Were Lab-Grown Sold?

The fine jewelry retail market has several well-defined cycles, especially in the US. There is a rise in sales in February, ahead of Valentine’s Day, another rise, usually smaller, during May ahead of Mother’s Day, and then a large increase in sales during the November-December holiday season, which in recent years has shown signs of starting as early as mid-October.

An important driver of diamond sales is bridal. Sales for engagement rings and other bridal jewelry typically takes place in the summer months and during November-December, leading to an increase in sales during those times. Finally, another important driver of diamond jewelry sales is tourist traffic, both domestic and international. This is most notable during the summer months, although it is limited to stores located in high tourist traffic cities such as New York or San Francisco.

Lab-grown sales follow a similar pattern; however, there are a few interesting differences. We see a rise in sales through the year with peaks in May and again in December. There isn’t a peak in February, but that may be attributed to other reasons unrelated to consumer demand. What is very surprising is the pronounced dip in lab-grown sales during the summer months and then again in November, as shown in the following graph.

These declines take place despite the overall rise in demand for lab-grown during the year, which begs the question why sales for lab-grown are regressing at times when overall fine jewelry sales are rising. The most likely explanation is that they are, relatively speaking, less desired for bridal jewelry.

Engagement rings are a tradition, and diamonds are strongly associated with this tradition. It appears that lab-grown goods are not viewed, at least not yet, as a substitute to the traditional natural diamond engagement ring. Brides-to-be make a strong distinction between the two categories and view them differently.

The width and breadth of consumer purchases of lab-grown are not very wide, in fact, they are surprisingly narrow.

Other possible reasons for the decline in sales is that strong retailer marketing efforts overshadowed lab-grown or that American consumers were more open to lab-grown than international tourists who purchased diamonds during their visit to the US. While there is probably a combination of reasons for the decline, the first reason is likely the strongest among them.

In support of this, you will find the following graph very telling. It shows sales of lab-grown as a percent of total diamond sales. While seasonal trends shown in the previous graph reflects overall sales trends, this is share of market and a better reflection of consumer sentiment.

First, you will notice that the decline in the summer months was especially deep and that it happened again during the holiday season, when relative demand was actually declining compared to September and October. This could indicate that in the eyes of many American consumers, lab-grown stones are viewed as more of a fashion item than a luxury item. When diamond jewelry items were purchased as gifts for others or as a high-ticket engagement/bridal item, consumers had a preference for natural diamonds.

There are several more important pieces of information that can be learned from this data: even though consumers may have bought relatively fewer lab-grown goods when overall fine jewelry and diamond jewelry was on a seasonal rise, lab-grown share of market clearly climbed throughout the year, as the linear dotted trend line shows.

Further, compare the share of market in January and February 2015 to January 2016. From hardly any sales in early 2015 sales increased to 0.9% and subsided to 0.6% in January of this year. The peak in September-October took place just before lab-grown had a large marketing boost when lab-grown producer Diamond Foundry announced that they were being backed by Leonardo DiCaprio. That was in early November. While the media blitz caught the attention of many, it seems that it did not lend an overall improvement in sales in the lab-grown category.

Compared to all sales of loose diamonds, lab-grown had an average market share of 0.5% during the 13-month period.

On average, loose lab-grown goods cost retailers a little under 40% less than comparable natural diamonds. This is a big difference, and it is larger than many had estimated the wholesale difference. Retailers sold these goods at prices of a little less than 30% below natural diamonds, making them an enticing option for budget-conscious consumers.

From a retailer standpoint, lab-grown presents a very interesting prospect. First, they seized the opportunity and kept some of the cost difference for themselves and improved their margins. Next, in the last two years, American retailers have reported a shift to lower priced diamond options. Consumers either bought smaller, lower color or lower clarity diamonds. We see this in our retail data as well.

Retailers’ cost of lab-grown was ~40% less than the cost of natural diamonds. and they sold them for ~30% less.

A jewelry item set with lower priced lab-grown gives retailers the opportunity to cater to this shift in consumer behavior and improve their turnover, as well as to increase their margins. Because the turn of lab-grown is faster than that of natural diamonds with similar characteristics (size, shape, color, clarity and grading labs), they also are a better use of financial resources.

Combined, these are very enticing reasons for specialty jewelry retailers to add lab-grown gems to their offerings and, as such, pose a certain competition to natural diamonds. I stress “certain” because lab-grown still have a long way to go. Consumers are interested only in a very narrow band of such stones, mainly Round, one carat, J/SI1, and in small quantities, with about 0.5% of market share. Consumers don’t seem to feel that lab-grown are fit for the important bridal diamond category and seem to consider them mostly for fashion jewelry.

Nonetheless, if the natural diamond industry wants to protect its position, it is time to act. Consumer demand for lab-grown is rising, customers are buying items that are at the heart of natural diamond demand (HIJ/SI, Round/Princess, 0.50-2 carats), and the interest in 2- and 3-carat diamonds shows that this demand is not limited to smaller budgets.