The diamond industry keeps facing hardships that call for a serious bailout plan, and diamond mining companies are starting to respond to the crisis with measures that will provide relief, albeit temporary. It is a diamond austerity plan.

In the past few days, some of the leading diamond miners and suppliers are responding with strong measures to the unfolding crisis in the diamond industry. In a message to Sightholders, De Beers said they “appreciate that it is currently a seasonally quiet period for trading,” providing them the option to defer up to an additional 25% of their total allocation (excluding whole boxes of ex-plan).

De Beers appreciates that it is a seasonally quiet trading period, and it is providing Sightholders with the option to defer up to an additional 25% of their ITO.

The interesting part about it is that unlike regular deferrals, which need to be requested in advance, decisions on the additional deferrals can be made at the Sight. This way, Sightholders can first examine the goods, consider the price (which becomes known only during the Sight) and only then make up their mind if to take, refuse or defer the box.

Sight 6 is estimated at $600-$650 million, based on the ITOs. Together with the deferrals already requested (estimated at 25%), the additional deferral may slice the Sight by up to half, some $300-$325 million before ex-plan and specials. There were very few requests for ex-plan.

At this point, it is not known if De Beers will or is even inclined to reduce prices beyond the regular adjustments. To date, the tendency on its part has been to reduce prices slowly. The market appreciates that because it does not want to see the value of their existing stock plunge, yet it wants to see the pace of price reduction pick up a little.

The additional deferral is an important measure on the part of De Beers, yet it still leaves a large supply to the market. According to some diamond industry insiders, the market only needs about $250 million for known orders.

One market insider suggested that De Beers offer Sightholders Specials – rough diamonds weighing 10.8 carats or more – at a price that will allow them a high margin, say 50%. In the past, De Beers did this as a way to give de facto discounts. The overall margin from the goods was high enough to create profitability.

This is a good idea, among others because it does not devalue existing rough stocks. The downside is that De Beers needs to have Specials on hand to do so. By nature, these are rare. In addition, it means that De Beers will need to be willing to forgo the profits they themselves can make by selling Specials at full price.

ALROSA is offering up to 20% rejections and another 20% refusals in July.

The Russian supplier ALROSA is also responding to market woes, offering up to 20% rejections and another 20% refusals in July. Alternatively, clients can elect to defer up to 30% of the allocation. ALROSA has also informed clients that it is not reducing prices, except on a number of larger goods.

Like De Beers, the deferrals are to August, which means the mayhem of large supply is averted (or at least deferred) until August.

However, Rio Tinto Diamonds has decided to take a different path. It reportedly lowered prices, and then offered its clients the option not to buy the goods for two months. Because of the price reduction, and Rio’s relatively smaller supply, traders plan to attend the sales week and probably buy some of the goods – depending on real necessity.

A few weeks ago, Dominion held a price discovery tender. This is a tool used to determine prices for their rough. In the weeks that have passed since the tender took place, prices of rough have further eroded.

The question Dominion clients ask at this point is: Will the company stick by the results of the tender or reduce prices? The decision may have an impact on the amount of goods clients buy.

Austerity: A state of reduced spending and increased frugality in the financial sector. There are parallels between the current situations both in Greece and in the diamond manufacturing industry.

Dictionaries have several definitions for austerity. Investopedia defines it simply: “a state of reduced spending and increased frugality in the financial sector,” which seems the one closest to the situation.

Briefly, Greece was run poorly, allowing large monopolies and power centers to dictate many of its economic decisions while borrowing heavily to make ends meet. In the fallout of the 2008 economic crash, Greece teetered on the verge of a financial abyss and was forced to take austerity measures.

From the perspective of the banks, they want Greece to pay back the borrowed money. However, a debate remains as to who is at fault, who should pay, how much they should pay, what measures are needed to salvage the country’s economy and exactly what “salvage” means.

Most diamond-manufacturing firms are heavily leveraged and are up to their gills in commitments to the banks. This has led many manufacturers to do business for the sole purpose of ensuring their credit line was maintained, for the banks to see that they are doing business, to keep the ball rolling. That, in part, was where losing rough diamond transactions came from. 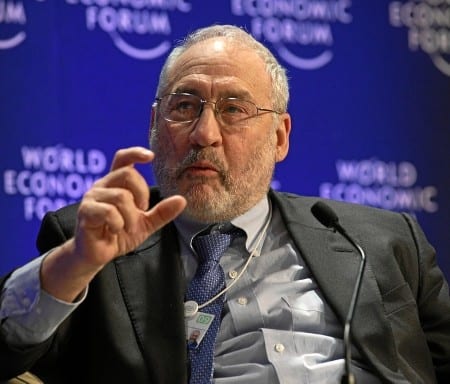 Nobel Prize winner Joseph Stiglitz, who was the keynote speaker at the 2007 Antwerp Diamond Conference, noted in an article this week: “Though the conditions Europe imposed on Greece caused its depression, Greece saw little of this money – about 90% went to the creditors…” Sadly, the same can be said for the diamond industry’s manufacturing sector. The bulk of their proceeds from selling polished diamonds are used to repay the banks that provided the credit given to buy rough – as well as the interest on that credit.

The lack of generic marketing on one end of the pipeline and out-of-sync rough on the other end have much to do with creating the current entanglement. But manufacturers should also remember their part in getting there.

“This is typical: Most bailouts (e.g. the Mexican bailout) are not bailouts of the country, but of Western banks who didn’t do adequate due diligence,” Stieglitz added about the causes of the crisis in Greece. Once again, we can draw a parallel to the diamond industry’s manufacturing sector.

Some players in the midsection of the diamond industry were willing to make purchases that didn’t make any economic sense, didn’t add value and didn’t reflect healthy long-term practices. Yet suppliers – of rough, money, etc. – were willing to ignore this. They extended a long rope with a noose at its end. No wonder some firms feel like they are at the gallows.

The measures taken by the leading diamond suppliers are good and necessary, but should have been offered earlier. Maybe they doubted that the situation was that bad, but there is no point playing a blame game in hindsight. In July, miners will offer fewer goods, manufacturers will have some relief, and in August – this entire saga will be of a very different magnitude. The Diamond Austerity will last for a while.

How Sightholders Take Care of Business – A Market Report
Is the Diamond Market Screeching to a Halt?