Pop quiz: Rough diamond prices were reduced at Sight 7 by: 13%, 9% or 5%? If you examine the price list, you’ll see that the price of some goods decreased by as little as 2.5%, whereas others were cut by as much as 20%. One report may have been based on a simple average of the discounts and came close to 9%. However, this does not take into account the change in assortments.

The consensus among Sightholders seems to be that assortments were lower, if not much lower this Sight. De Beers has decreased its mining activities, and even though it is probably sitting on a larger than usual inventory, it still may have a shortage of certain goods. It is possible that the lower assortments are the outcome of less availability.

Thus, it seems that the real price reduction was in the region of 7%-8%

The size of the price reduction is a real economic issue. Many Sightholders are still saying that prices are not low enough to be worthwhile to polish, especially in light of the current trend: a preference on the part of manufacturers to buy polished diamonds instead of manufacturing rough. The reason is that it costs less to buy polished on the market than to buy rough and then polish it.

In the graph below are the price changes of three popular boxes: Fine 2.4-4 carats, Commercial 2.5-4 carats and Spotted Sawables 4-8 grainers. As you can see, their list price somewhat changed over the past year, and most of the price reductions – more than half in all three instances – were made at the most recent Sight. The list price of these three items declined by 12%, 17% and 24%, respectively in the past two years. 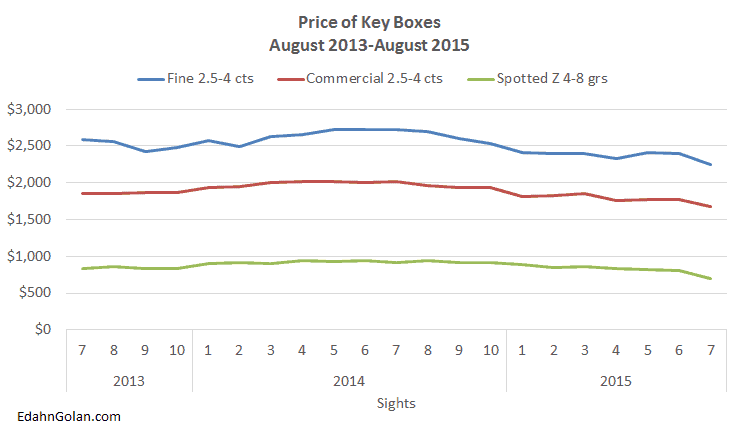 The issue Sightholders have is that, compared to polished, the price reduction of rough goods has not caught up with the decline in polished prices. Looking at the same three boxes, compare their price declines to those of the resulting polished. It is this very gap that Sightholders are speaking of.

Sight 7 is estimated at around $300 million. This includes the goods in Sightholders ITO, after deferrals. De Beers informed Sightholders that at Sight 7, they can change their mind about the deferrals, and that after the Sight, they can rearrange their ITO for the rest of the period – six more Sights.

The Sight was planned to be in the +$200 million region, and the rest of the purchases were some of the goods that Sightholders asked to defer, but changed their mind about. Generally, Sightholders took only what they needed, with only a few boxes taken to be offered in the secondary market. The reason for this is that selling goods on the secondary market often results in a loss. Another reason is the concern that buyers won’t meet payments – late or not at all – hurting cash flow. The goods that did sell were often sold for a 5% premium on 120-day credit terms.

Finally, very little ex-plan was requested and hardly any specials offered. One insider said that specials were offered at the South African Sight, and the goods were considered expensive. All together, cancelled deferrals and ex-plan are estimated at $50-$75 million.

De Beers is making efforts to play a positive role, as viewed from Sightholders’ perspective. Prices were reduced, the volume was cut down (once again many boxes were not offered) and greater flexibility in supply was offered. On top of this, De Beers announced plans for a generic diamond campaign in addition to Forevermark’s “A Diamond is Forever” holiday campaign.

And yet, Sightholders’ sentiment is very low, they do not express any optimism for the near future, as they are concerned by the many defaults in the market, the receding polished prices, and the continued uncertainty. They simply don’t see relief in sight. 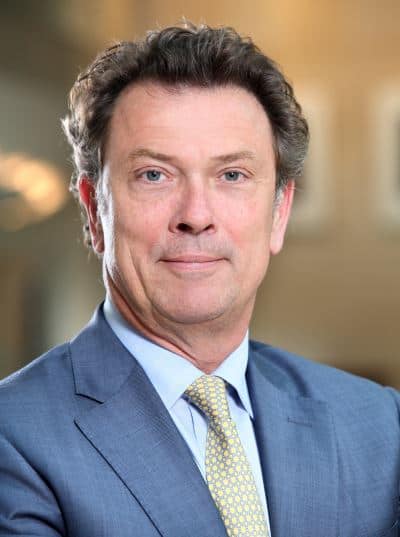 When the crisis in the diamond industry started developing, it felt like it was a result of its own making, isolated from macro-economic issues. Since that time, the drop in the Chinese stock markets and a general softening of the Chinese economy is dragging down the global economy. The prices of commodities such as copper, iron ore and crude oil have been heading down for many long weeks.

Does this have any impact on diamond industry financing? “I don’t think so,” says Erik Jens, CEO of Diamond & Jewellery Clients at ABN AMRO, the leading diamond financing body. He actually sees a positive: “It creates opportunities, consolidations, for example, a chance for innovations.”

Consolidation in the midstream may not come from companies buying each other out, but rather from some of them closing and others stepping in to fill the void, a trend we are already seeing. A rash of businesses closing in India, Dubai, Thailand and one in Israel took place in the past couple of months.

When asked about the basic long-term model of the diamond industry – declining supply and rising demand – Jens does not feel that the current decline from China, for example, is changing the model. “We will see a slowdown, but it is part of the normal [economic] cycle. Demand continues to grow,” he says.

On the other hand, inside the industry, he still wants to see tighter controls, saying he “absolutely” expects industry organizations such as the WDC and WFDB to implement stricter controls, such as the “Name & Shame” policy already in place.

He also laments on the high borrowing level, which raises the continued question of the role Indian banks play. “Indian and Chinese banks are learning that it’s all about knowledge, knowing the industry.” After suffering from a number of failures, he hopes they will “act more carefully, learn from mistakes.”

As noted above, and a few times in the past, after the large refusals starting from Sight 3 this year, De Beers is supposedly sitting on a huge inventory. This would be a serious financial burden because the cost of mining these goods is still there, but the cash flow is not. In the past, such as during the 2008 financial crash, De Beers found a way to sell many of these goods, and not through the Sight system.

At the time, there was a lot of very confident talk in the market that De Beers had sold goods to a few large Sightholders at a discount, either a real discount or by including a few special diamonds at a much reduced cost. One of the requirements for such a move is confidentiality. De Beers does not want to officially reduce prices, and in return for keeping mum, a few companies with good financial abilities got extra goods.

Once again, there is a lot of talk in the market that the miner sold a large number of goods to a few Sightholders for a substantial discount during or after Sights 5 and 6. How large is not known, nor is the size of the discount. However, this time around, the level of discretion was somewhat lower.

It’s not clear if the expectation from selling these goods is that they be manufactured by the buyers, or sold as rough to the secondary market at a discount. Many of the goods were apparently sold to the secondary market. De Beers, it seems, sold these goods at below the prices charged at last week’s Sight. Accordingly, this caused some disruption, not to mention expectations for even lower prices.

The decrease in rough diamond prices raised an expectancy downstream that polished prices be reduced as well, a concern I have heard from a great number of people. This is not a reasonable expectation because prices of rough diamonds were reduced to meet the declining prices of polished, and as the table above shows, there is still a long way to go before getting there.

That said, the expectations for the upcoming Hong Kong show later this month are very low. Testimony of that is the lack of promotions. Usually before a large trade fair, exhibitors email trade members invitations to visit their booths and set up meetings. Hardly any of this is taking place now.

Considering the current market, with its low mood and a continued need to generate cash flow, some traders may choose to lower prices. What may prevent this is the understanding that De Beers does not intend to lower prices any further in the near future.

On August 28, ALROSA reported that production in the first half of 2015 increased 13% to 15.9 million carats. Sales volume, however, declined by 15% to 21.1 million carats. In the first quarter of the year, the company sold some inventory goods; however, second quarter sales fell below production.

While the miner reported a sharp rise in revenue, it was mostly driven by the depreciation of the Russian ruble against the US dollar. In rubles, sales of gem-quality goods rose 28%, neutralizing the currency exchange effect, while sales declined by an estimated 20%, a result of a combination of lower volume and the price of gem-quality diamonds sold during the period.

ALROSA estimated that the price achieved for its goods declined by 5%, due to the market conditions.

The company is facing rising costs, specifically labor and energy, resulting in rising cost of sales. With most of its expenses in rubles and revenue in dollars, the weakening ruble is helping ALROSA post improving bottom-line results. This is not a reflection, however, of the market they are operating in.

US Retail: Early Signs of Improvement?

According to ALROSA CEO Andrey Zharkov, the company sees “a steady increase in demand for diamond jewelry in the USA.” This is backed by Signet’s report that same store sales were up 4.2% in the second quarter.

There are contrasting reports in the US market. According to US government figures, specialty jewelers’ sales increased a strong 7.7%, while jewelry sales at other merchants were down an estimated 0.6% in June. This is an atypical trend. Industry analyst Ken Gassman points out two additional sources, LGI Networks’ branded jewelry service and InStores’s Brain Squad, which are both reporting exceptional June sales by specialty jewelers.

It should be noted that early figures indicate that overall sales have increased in July; however, until specialty jewelers sales figures are in, we won’t know how multi-item retailers performed separately.

Conversely, a closer look at Signet’s numbers show that the national brands enjoyed better business, while the regionals suffered from a decrease in business. This could reflect a wider trend in the US market – chains doing well, while smaller stores and independents are suffering. Talking with businesses in the US and their suppliers supports this view.

Tiffany reported that first half sales in the Americas rose 1%, and comparable store sales were unchanged. In the second quarter and in the first half of the year, higher sales to US customers were offset by lower foreign tourist spending in the US. 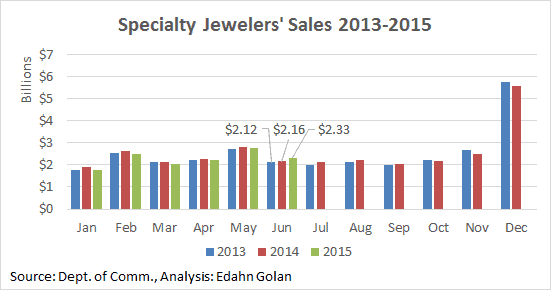 How can these opposing dynamics, independents doing well vs. their business shrinking, co-exist? First, we may see the government adjust its numbers, something it has done in the past, even radically. More importantly, business at higher-end retailers, such as Tiffany, and independent guild jewelers is suffering, while at popular price point retailers, matters are better. Remember, the trend of “More for Less” is the new normal.