On Monday, 84 Sightholders and two Accredited Buyers will begin attending the first Sight of the new contract period – but quite cautiously. The Sight is not expected to be very large, around $400 million, because Sightholders opted to start the contract by scheduling fewer goods for the upcoming Sight.

The first Sight of the 2015-2018 Global Sightholder Sales (GSS) contracts will take place during a very challenging period for the global diamond industry: 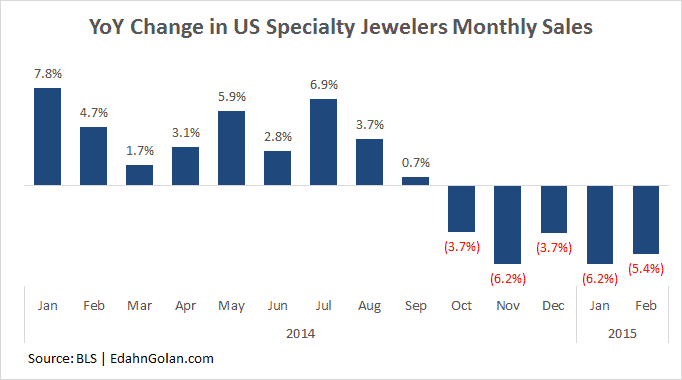 With this in mind, Sightholders applied for a cautious supply schedule (ITO – Intention To Offer). According to one Sightholder, in light of the current market conditions, people are reluctant to buy, adding that Sightholders have lost money. Of the ten Sights in the first year of the contract, the requested ITO is light for the first Sight due to Sightholders saying that they don’t need much supply at this point. The requested boxes are items that the Sightholders feel they can use – either to polish and sell, or to trade as rough.

That said, there is some interesting talk about the ex-plan. Prior to the Sight, there were requests for 2-carat and larger goods as ex-plan, and De Beers informed Sightholders last Friday that these requests were accepted.

Generally, De Beers does not inform its clients about prices in advance. On rare occasions, it has informed them that prices would rise, mainly so they could pass the information downstream as a way to support the expected firming up of polished prices. However, even in those cases, the company did not state by how much prices would rise, providing only general guidance at best. It never states specific prices of particular boxes in advance, at times leading to an element of surprise at the Sights when the prices are announced. At times, as happened often in the past year, there is buyer anticipation before the Sight of heading into the unknown.

When Sightholders apply for ex-plan goods (or when De Beers suggests an additional supply to Sightholders), again they never know in advance how the goods will be priced – the same as at the previous Sight time, less, or more. Offsetting this unknown, Sightholders are not obligated to buy the goods and won’t be penalized for leaving them on the table. This may well happen if prices of ex-plan goods are perceived as too high.

Currently the volume of ex-plan goods requested is not known, but this presents an interesting opportunity. If De Beers reduces prices, ex-plan goods may be a profitable purchase, especially if a buyer needs the goods or speculates that they will come into demand in the near future and could be sold for a premium. This is a gamble, but it does have an exit plan.

The exit plan is the option to refuse the goods and leave them on the table if the price is not right. Of course, even if prices are reduced and the goods are purchased, this may still not prove to be an economically sound decision; after all, gambling also carries the risk of losing money.

This is the kind of play large Sightholders can pull off, and according to one insider, perhaps one of the new Accredited Buyers may try to do it just to impress De Beers. As stated, this is market talk. The motives may or may not be there.

After announcing a reduction in production (first revealed by Debswana that this has actually already started), the perception in the market is that De Beers has gotten the message. The large volume – and more importantly large value – of refusals have made it clear that the market cannot digest the large quantities or high prices of rough supplies. Therefore, on top of reducing supply, the diamond miner is expected to reduce prices.

Conventional wisdom holds that the price reduction would be on average in the neighborhood of 2%-2.5%. That is a relatively large reduction. On the high side, there is some expectation that for certain boxes, the reduction could be as much as 5%.

While a reduction in rough diamond prices is certainly needed, this should be implemented at a gradual pace. A steep decline in prices could actually cause more harm than good. With so much of a company’s equity tied to its rough diamond stocks, a sharp reduction may hurt their debt-to-asset ratio and lead banks to either call in money or to reduce credit facilities. Manufacturers would prefer prices to remain at current levels with supply reduced and prices of polished diamonds on the increase.

That desire, however, is utopian. It does not take into account the drop in demand for diamond jewelry, partially caused by rising polished prices according to some retailers. A phased-in reduction in polished and rough diamond prices is a more practical solution, but that just may be utopian on my part.

As always, there is a chance prices will not be reduced and that supply will remain high, which begs the question of what Sightholders will do. A few are saying they may refuse goods that are not priced right.

This is hinged, of course, on De Beers’ adjusting prices downwards. If prices are not reduced, at least not in the right places, ex-plan buying will partially decline, and other regular boxes may be refused as well, bringing down the Sight total.

Sight Okay, Retail Not at All
Jewelry Expenditure Rises amid Stunted Growth, Millennials Stepping Off the Plate
Comments 3