If you are trying to see the half-full part of the glass, you’ll hear the voices that say that “De Beers finally got the message and lowered prices.” From a Sightholder perspective, the conclusion is that the Sight was okay.

While that may be true and important, the issue is not only about price, but also about quantity. As the global diamond industry is stumbling forward, the US government has revised its figures on jewelry sales data. According to the updated figures, sales were worse than previously stated. And as for the future, it does not look too exciting either.

As expected, De Beers lowered prices of rough diamonds at the May Sight. Prices were down on average 2.5%, with the price of some items reduced by a high single figure – as much as 8%. This price reduction was necessary because the price of polished is comparatively low. From a diamond manufacturing perspective, this means that polishing and selling polished at wholesale prices is a money-losing proposition. As long as consumers are not chasing diamonds with vigor, prices of diamond jewelry items are either declining or such jewelry is simply not selling. This drop in demand pushed down polished diamond prices. From this perspective, prices of rough diamonds need to be reduced to meet real demand and prices of polished.

That said, a reduction in the price of rough would be a double-edged sword. It would not only help manufacturers, it could also hurt them because bringing down rough prices would reduce the value of inventories in which they have serious capital invested. So while manufacturers need prices of rough reduced, they also want this to be done in a measured way, even limited in scope.

Confused? Let me add another aspect to the price issue – Sightholders are complaining that prices were not reduced enough – not enough to make polishing profitable again. That is fair enough, which brings us to the issue of volume.

A reduction in the volume of supply would not only relieve the burden of accumulating an inventory that is not selling quickly enough (and by reducing rough diamond purchases, they could also more easily generate a positive cash flow) and reduce the capital tied to a large inventory. In the interim, it would also build scarcity, which would support price increases. Thus, a combination of moderate price reduction and supply decrease would work much better not only for manufacturers but also for retailers.

The estimated size of the May Sight was accurate: ~$400 million of regular supply, another ~$50 million in Specials and some $50 million in ex-plan for a total of $500 million max, probably a little less. The request for ex-plan was for specific goods that are still profitable. De Beers satisfied these requests – wherever Sightholders asked for ex-plan, they got it.

This is a signal that De Beers will not decrease supply if it can help it. The reduction in supply is (at least partially) in the hands of Sightholders. De Beers will supply the ITO (Intention To Offer) in full and push ex-plan to anyone that asks for it. Stuck with an estimated $0.5 billion in additional inventory, practically an additional Sight in itself, De Beers is more than happy to supply whenever and whatever it can.

De Beers mined 7.7 million carats in the first quarter of 2015, a 2% year-over-year increase, driven primarily by higher grades at Venetia. This extra inventory is not what the company currently needs, which is why it recently announced that “in light of current trading conditions,” it will reduce production from 32-34 million carats to 30-32 million carats (~6.5%). In 2014, the company mined 32.6 million carats, so like it or not, De Beers is expecting demand for rough diamonds to be lower at least until the end of the year. 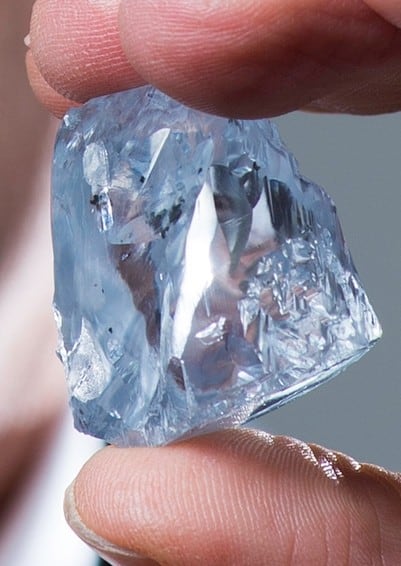 There was very little demand for many of the De Beers goods in the secondary market. The 5-10 carat Collection and Fine boxes did not interest buyers on the Bluedex trading platform. Spotted, on the other hand, were in demand.

Refusals are estimated at around 5% of the goods by value, a low amount. This is reasonable considering the price reduction and limited volume of supply.

Traders stated that the assortments of many of the 3-6 grainer and Indian Cleavage boxes were not good. On the flipside, the Preparers and Commons 2.5-10 carat boxes had improved assortments. This improvement combined with the lower list prices made these two types of goods profitable. Premiums on the secondary market were around 2-3% with credit terms, meaning that sellers lost about 1%.

Changes in De Beers’ list prices, by the way, ranged from a more than 10% decline to some 26% increase. This is a very wide range, but keep in mind it is the assortment that determines a box’s final value and real price.

The continuing supply issues, and De Beers’ acknowledgment of them, would normally take a small pause for the usually celebratory occasion of a new contract period. However, the new Accredited Buyers, traditional dinner and small change in the list of Sightholders was anything but festive. In fact, several leading traders chose to be absent from the dinner, a further sign of the growing rift between De Beers and its clients.

In the past, a new contract period meant a certain change of the guard – a few new companies were added to the ranks of Sightholders and a few left. This time around very few were added, and only a couple left. This is in line with the new selection process of simplifying the application process and basically keeping existing clients, unless there was a good reason to part ways (see full list here).

The May Sight, the first of the 2015-2018 contract period, was a small one by design: Sightholders applied for a cautious supply schedule (ITO). Of the ten Sights in the first year of the contract, the requested ITO was light for the first Sight due to Sightholders’ claims that they didn’t need much supply at this point.

In contrast, the next Sight, to be held in June after the JCL Las Vegas trade fair, is expected to be a big one, which raises the question – will manufacturers be faced with more glut?

In all fairness, it’s not just them that are suffering. The decline in demand and prices, compounded by the large scale of refusals in the past few months are seriously hurting De Beers’ cash flow as well as Anglo American’s, the parent company that depends on De Beers for the source of 28% of its income.

De Beers, according to one insider, is “trying to keep its head above water.” It has large overhead costs in labor and energy and needs to jump-start its cash flow. If the Las Vegas show proves soft as expected and not profitable, Sightholders and De Beers will reach a “critical point,” he added. Sightholders will ask to delay delivery of goods and may refuse items that are not profitable. De Beers will try to pass as much as possible into the hands of their clients, resulting in an arm wrestling that will end either with one side losing or both. Even if only one side loses in this struggle, the ramifications are that both will pay a price. From my literature classes, if I remember correctly, this is the definition of a Greek tragedy. And a tragedy is indeed what we have on hand.

During the Cold War, Western intelligence communities used to track changes in the Soviet regime by examining photos of events attended by the top brass. Historical revisions, such as removing a general from the official May Parade photos years after they were taken, revealed that the person had fallen from grace.

On May 13, the US Department of Commerce, source of the most reliable retail trade data, released revised specialty retailer sales figures. It has revised the history of the US jewelry market, signaling that this market segment is slowly acquiring the status of a persona non grata in the US.

Their update, going back seven years to January 2008, reduced all sales figures. The most extreme revisions are for 2013 and 2014, where sales figures were reduced 8.9% and 9.3%, respectively, though not respectfully. Not that it changed the real traffic of cash through the register. It only more accurately paints what has happened in the market in the years since the 2008 crash.

According to the updated figures, 2013 sales by specialty jewelers increased only 1.8% year-over-year, and in 2014 they inched up 0.7% to $30.5 billion. November-December holiday sales fell 4.4% year-over-year.

In the first quarter of 2015, specialty jewelers sales totaled $6.27 billion, a 5.6% decline from Q1 2014. The decline in sales during March completed six straight months of sales declines that started in October 2014. In response, retailers in the trenches are holding off on diamond purchases, cautiously waiting to see if consumers come back to the stores. But for now, this uncertainty is leading to a reduction in stocking up on diamond inventories.

With that in mind, it is interesting to examine Blue Nile’s recent results. In the first quarter, US engagement net sales increased 2.1% to $61 million and non-engagement net sales decreased 0.3% to $26 million. This brings total US sales to $87 million compared to $85.8 million in Q1 2014, a 1.4% increase. By focusing on diamond engagement rings at the expense of non-engagement items, the company improved sales at a time when many others experienced a ~5.6% decline in sales.

However, the improved sales are not turning into stellar profits. While $20 million is a handsome 18.8% gross profit, net profit of $1.19 million on net sales of $106.48 million is a thin 1.1% margin. These are troubling figures coming from a firm that is doing relatively well and a further sign of the economic state of the industry.

Tiring to State Again, But…

If anything, marketing is what keeps Blue Nile profitable. Brick and mortar gross margins on diamonds are around double Blue Nile’s. This is a company that invests seriously in marketing, especially compared to independent specialty jewelers, and that is what gives it an edge over other specialty jewelry retailers.

The US market continues to send mixed signals. On one hand, the US economy is continuing to improve. Unemployment is down to 5.4%, and factory orders increased 1.2%. On the other, jewelry sales, especially of diamond jewelry, are not rising. The real tragedy is that even though the history of US jewelry sales is looking worse – its future could be a lot brighter if it only the stakeholders were more unified.

What is the Price of a Diamond?
Sightholders Begin New Contract Period Cautiously
Comments 1