Fine jewelry sales in the US totaled $66.5 billion in 2015 after consumers rediscovered jewelry in the fourth quarter, leading to a resurrection in demand. After a well felt slump, mostly among diamond suppliers, interest in fine jewelry sparked trade throughout the diamond pipeline.

The year started with a sharp drop in sales, down 1.8% year-over-year. As the months went by, year-over-year sales improved until they closed the gap in June 2015 when H1 2015 sales surpassed $29.5 billion. The slump in fine jewelry sales started in late 2014, culminating in a 2.4% drop in December of that year as consumers turned away from jewelry, favoring other consumer items as holiday gifts. 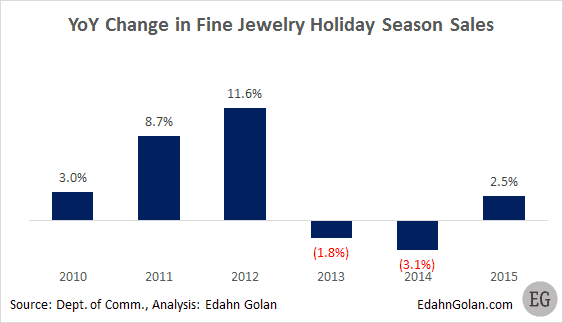 Components of the Resurrection

The change in consumer demand may have been helped by three occurrences. The first is the decline in precious metal prices. The prices of gold and silver, the most popular precious metals used in fine jewelry, declined 11% and 13%, respectively between December 2014 and December 2015.

The second occurrence is that polished diamond prices softened by 3% to 6% during the year. High inventory levels among retailers, with their bullwhip effect up the diamond pipeline, resulted in a glut in polished diamonds in the retail, wholesale and manufacturing sectors, and eventually even in rising inventories of rough diamonds among miners as demand slowed down throughout the diamond pipeline.

The rise in inventories, which hurt cash flow and tied up financial resources, led to the inevitable decline in diamond prices – polished as well as rough, allowing retailers to decrease prices in their stores, especially during the holiday season. 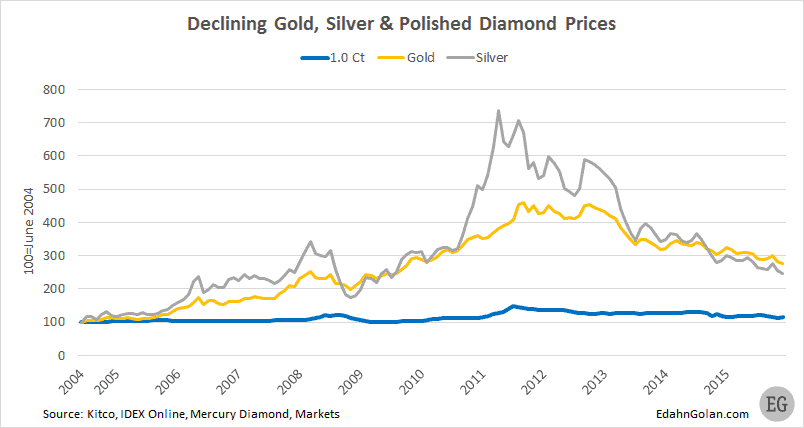 This reduction in raw material prices was passed to consumers in two stages: first, by manufacturers to retailers, as evident by the decline in the Jewelry Producers Price Index (JPPI), and then by retailers to consumers, as reflected by Jewelry Consumer Price Index (JCPI). The JPPI and JCPI are essentially wholesale and retail price indices.

The decline in the cost of jewelry components and the retail prices of jewelry had a positive effect on consumer willingness to purchase jewelry, including diamond jewelry.

A third contributor to improved consumer interest may have been from marketing efforts. Over the past few years, and especially following the dismal holiday sales in 2014, it became clear that marketing efforts must be stepped up. De Beers‘ increased marketing budget and the launch of Ever Us two-stone rings are among these efforts.

Not in the Clear Yet

The improved sales are good news; however, they have yet to indicate a turnaround in consumer interest in diamond jewelry. The US market focuses primarily on a very narrow range of diamonds: one-carat and smaller round-shape diamonds in HIJ colors and SI1 clarities and below.

The small bump in demand from China ahead of the Chinese New Year that was seen last month has already slowed down. Even the initial strong demand for rough diamonds seen during De Beers’ Sight last month – where Sightholders purchased mostly to sell the goods and less to polish them on their own – has also slowed.

The improved trade in late 2015 may have helped dry up inventories in certain categories, yet consumer demand has not changed dramatically thus far. Not until we see growing interest in bridal diamond jewelry and a willingness to spend on items with price points above $500 can we confidently say that the tide has turned.