In a way, there were no surprises this past week, and that in itself should be a surprise. De Beers offered a large rough diamond supply to its clients – at slightly higher prices – and the market just could not digest it, leading to many refusals. Why did the miner offer so many goods in an overloaded market? Why were the prices high even though prices of polished are declining? It does not make sense.

Stuck with a Half-a-Billion Dollar ‘Strop’

The March Sight is estimated at $730-$750 million before returns and “specials” (very high value rough that yields exceptional polished). With the specials, the Sight is estimated at +$800 million. According to all estimates, Sightholders refused more than 30% of it, or about $250 million worth of goods. I’m calling it goods, but we could really call it “assets.”

In brief, the story of the large refusal is that prices are too high, making the goods not economical, and refusals were all across the board from the lowest cost Rejection boxes to the top quality large goods boxes. The long and short of it is that traders do have the financial means to buy what they need, and the refusals were simply due to the high prices.

So the large March Sight had all the deferred goods from the past months, in addition to the regular March supply. The March Sight was the last of the contract period, so it was a matter of either buy the diamonds or turn them down.

Because this was the last Sight of the contract period, these refusals potentially have long-term repercussions for many Sightholders. Some of their supply in the next period will be based on their purchases at the March Sight. In these cases, their refusals mean that they may no longer get the rough diamond boxes they turned down. For these Sightholders, losing the steady supply is preferred to the continued money bleeding they are experiencing now.

Just who got hit? De Beers did. Consider the following table, an estimate of the Sights in the first quarter of the year. Numbers are rounded and dollar figures are in millions USD.

A quarter of the rough diamonds offered by De Beers to its clients, diamonds Sightholders were contractually obligated to buy, were refused. That is an asset worth half-a-billion dollars that no one wanted to buy. In the diamond industry, such inventory is called ‘Strop,” Dutch for noose. You draw the conclusion.

Mining is costly. It is a money-intensive operation, and a miner that cannot count on selling its mined goods very quickly has a serious cash flow issue on hand. De Beers has an advantage over gold or copper mining because diamonds suffer less from price fluctuations. All De Beers had to do, according to many Sightholders, was pay attention to the signs. Hence, many jokes have been circulating in the market in the past few days: some about smelling revolutions, others about avoiding train wrecks. They are all about survival.

However, this is no joking matter. De Beers is the star performer of parent company Anglo American. In the past year, Anglo’s share value dropped some 30% and more than 60% in the past five years. It is understood that the pressure on De Beers to keep prices high is coming from Anglo. With a half-a-billion-dollar strop, sorry, asset collecting dust in a safe, continued cash expenditure on operations and a 26% drop in income, insisting on high prices may have not been the right policy.

With a policy of maximizing profit, De Beers is not doing anything exceptionally unusual. It is a valid policy more prevalent since Anglo bought the Oppenheimers out and with Anglo needing to improve share value. It is a change of policy, and Sightholders kept expecting the old De Beers – the one that supplied generic marketing, the one you shouldn’t say no to because it didn’t pay off, the one that made sure all made money.

That De Beers is gone, and Sightholders found they had to adjust. The latest round of refusals proves that Sightholders have adapted to De Beers’ new policy and have adopted a key element – maximize profits – even if it means saying no to De Beers. According to a seasoned Sightholder, his colleagues have learned the new rules of the game, but he is saddened that the current thinking is short-term and possibly shortsighted.

De Beers apparently did make some decisions to mitigate the situation. For example, it looks like many boxes were not offered at all. In addition, there were a few requests for ex-plan. According to one account, the requested boxes included rough diamond items that were returned by other Sightholders; however, De Beers did not fulfill those requests for ex-plan and kept the goods.

That was not enough. Sightholders that opened polishing plants in Botswana include some of the largest and most financially able diamond firms in the industry. One by one, they are closing these factories. They were able to sustain the operations even with the relatively higher cost of labor. However, combined with the descending price of polished diamonds and the higher price of rough, they can no longer sustain those operations. 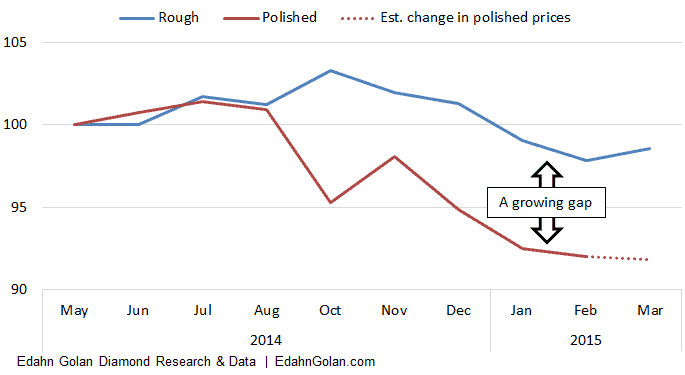 Also new is the requirement for International Financial Reporting Standards (IFRS) reporting, which Sightholders will have to comply with by 2017, and Accredited Buyers immediately. Along with it, clients are required to maintain a “maximum debt to equity ratio.” Although this is ambiguous, a figure was likely stated. The important point is that De Beers wants to ensure that their clients are financially sound (regardless of market theories).

ALROSA Expensive Too, Others Less

According to contracted ALROSA clients, the Russian diamond miner is also too pricey – “very expensive” according to one client who said that ALROSA’s prices are the same as De Beers.

In contrast, prices were not as high at tenders, where many flocked to buy very specific goods. In the secondary market, where De Beers and ALROSA parcels are traded, demand was low to non-existent. Some boxes sold at a loss, some at cost and some with a small premium to be paid in 90-120 days.

A few people in the industry wondered if the current price policies have a hidden agenda besides maximizing returns. As the theory goes, the high rough diamond prices are set to weed out the smaller, weaker companies in order to lead to a consolidation in the mid-section of the pipeline. As conspiracy theories go, this one is a bit far out and a little too wild for my taste.

“Less for More” Turns into “More for Less”
Jewelry Purchases, the Education Factor