We all know that US consumers spent much more on jewelry in 2021. But who exactly drove jewelry sales and by how much? The surprising findings show major shifts in jewelry expenditure in the post-COVID lockdown period.

Pent-up demand is the phrase that probably best describes the force behind this leap in diamond sales, especially in the US. Delayed weddings and proposals, essentially bridal, were important drivers.

The age group with the largest increase in demand was surprisingly under 25 years old. According to the latest available Bureau of Labor Statistics’ Consumer Expenditure Survey (CES), these young adults nearly quadrupled their spend on jewelry in 2021.

The two most surprising findings had to do with race and population. For the first time, Americans that identify as Asians, and those residing outside urban areas were top spenders on jewelry in 2021. These three demographics drove jewelry demand across the US.

US Households Spent a Third More than During COVID

With US jewelry demand leaping to historic levels in 2021, average household expenditure on self-purchased jewelry (as opposed to gifts) rose 44% to a record $647.

This may seem a low figure at first, but keep in mind that not all households had weddings, and many may have not purchased any jewelry at all. But with 133.6 million households, this average amount adds up.

Each adult spent on average $359.41 on jewelry in 2021. Again, this is a historic level of personal expense on jewelry.

From a jewelry market analytics perspective, these are interesting figures, but not very surprising. By diving deeper into the figures, we can learn much more about the jewelry market dynamics and try to understand how they impact both jewelry retail trends and the jewelry industry at large.

This is who bought jewelry in 2021 and so deeply shaped US jewelry market trends.

For years, the leading spenders by age group were either those aged 45–54 or the 55–64-year-olds. Both groups are around the peak of their earning power and tend to possess an appetite for finer jewelry.

But that was not the largest jump in spending on jewelry in 2021. This jump belonged to Gen-Z. The under 25-year-old age group burst out of lockdowns with a voracious appetite for life. Among spending on streaming services and accessories, they also revealed a growing interest in jewelry.

Gen-Z’s jewelry demand leaped 270% year over year. It is possible, this was because it began with a very low base. In 2020, the under 25-year-olds had the lowest spend on jewelry. 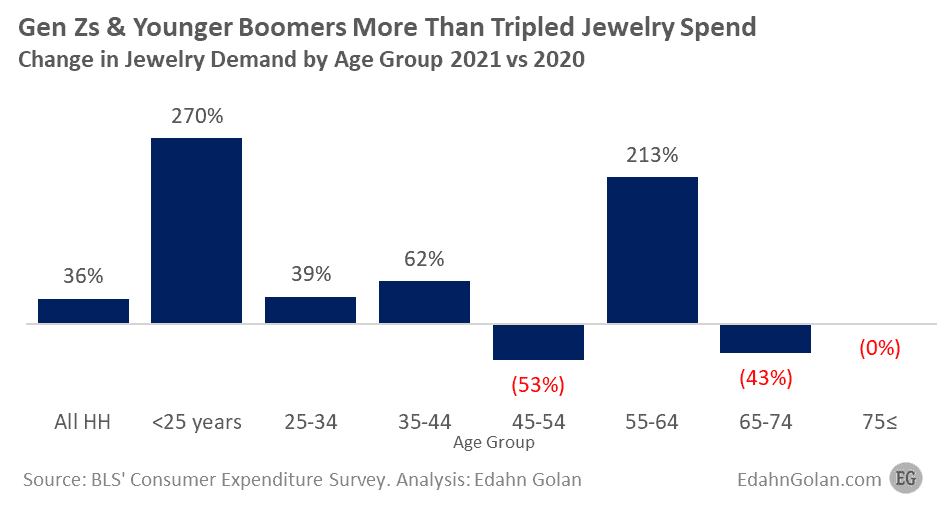 Asians are the Top Jewelry Expenditure Demographic by Race

The CES has a very broad race grouping, with only three categories: Black or African-American, Asian, and White and all other races.

All other races include, in their words, “Native Hawaiian or other Pacific Islanders, American Indian or Alaska Native, and approximately 2 percent reporting more than one race.”

Among these three groups, Whites and others have up to now been the biggest spenders on jewelry. The shift to Asians came as this group tripled (up 199%) their average expenditure on jewelry to $1,312 per household.

Whites and other households increased their average spend on jewelry by a third. Blacks or African-Americans decreased their spending 15% in 2021.

Over the years, the top jewelry buyers by occupation were fairly consistently either “Managers and professionals” or the self-employed. But in 2021, the top spenders were a rather mysterious group called “All others, including not reporting.”

This enigmatic grouping more than tripled its jewelry purchases in 2021 to clench the top spot. And yet, a group with one of the smallest expenditures on jewelry, “Operators, fabricators, and laborers” increased their spending the most – up 236%.

Jewelry Demand by Income Holds No Surprises, Neither Does Education

As in most past years, households with a pre-tax annual income of $200,000 and more were the leading spenders on jewelry. Up 84% over the previous year, they spent on average $4,153 per household.

Obtaining a higher education usually leads to higher than average income. In 2021, college graduates’ annual income after taxes was double that of non-college graduates, $107,446 versus $52,926.

College graduates also spent three times more on jewelry, with Bachelor’s degree holders shelling out on average $1,233 on jewelry in 2021. 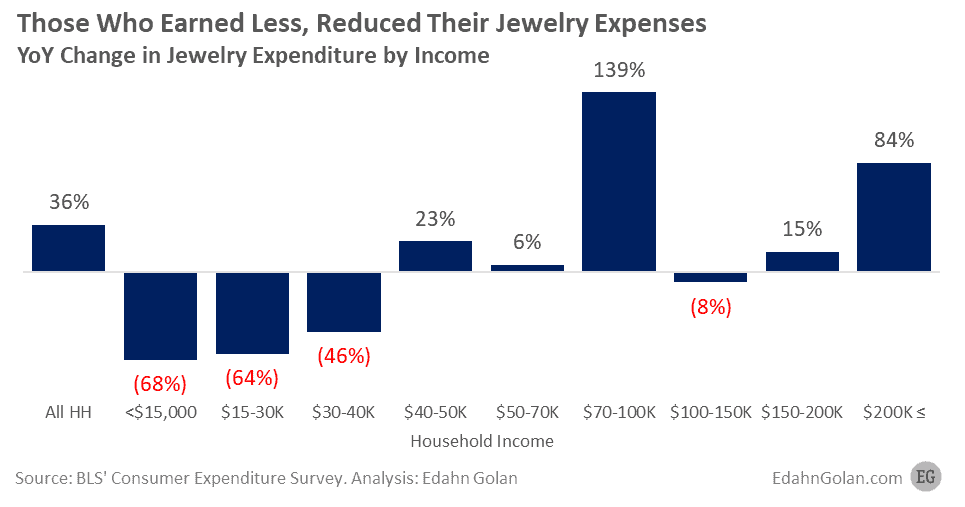 Population Size and Jewelry: A Bounce Back

After slashing their spend on jewelry by 73% in 2020, those living outside urban areas are the top jewelry buyers by population size of area of residence. Their average outlay on jewelry bounced 290% to $1,250 per household – a very impressive recovery.

Who Spent the Least on Jewelry in 2021

Who spent the least underscored who was hurt the most by the pandemic, but this is not the whole story. Some, like the 75 years and older age group or those who retired rarely spend on jewelry.

The same is true with education, with those who had some high school education, but didn’t graduate.

The one substantial change involved the lowest income households – those that report a pre-tax income of less than $15,000. Historically, this demographic group has reported an average or higher spend on jewelry. The rationale was that this group had unreported income and actually had higher than average discretionary income.

However in 2021, they reported having the smallest average expenditure on jewelry by income group.

The CES data also include surprising numbers on watch demand. While Asians, 45–54 years old and households with a +$200,000 income were also the top watch buyers, by occupation, service workers actually spent the most on watches in 2021.

By population size, it was big city folks, living in cities with a population of 2.5–5 million who spent the most by size of area of residence.

As far as region is concerned, while those living in the Northeast spent the most on jewelry, those living on the West coast had the greatest interest in buying watches in 2021. 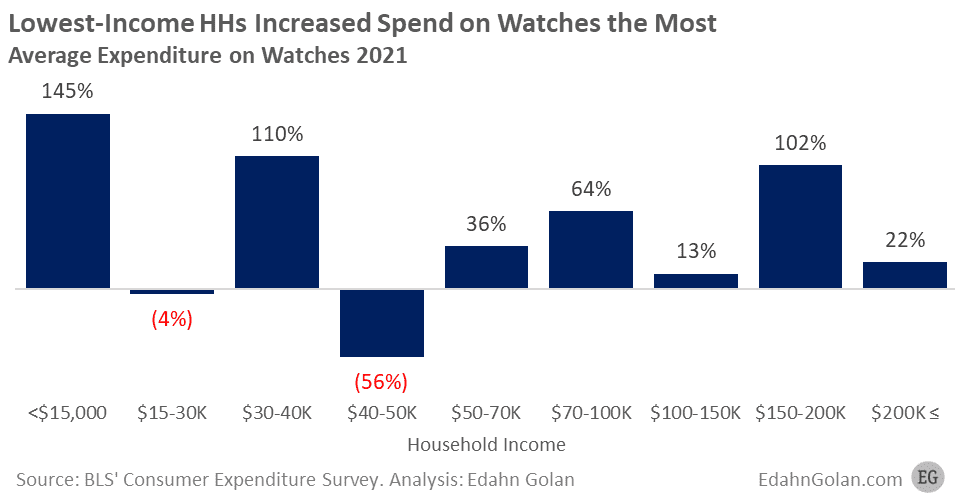 Recent data show a significant shift in jewelry expenditures in the United States, with younger and more diverse demographics driving a significant portion of the market.

According to the latest jewelry market data, the average age of jewelry consumers has decreased in recent years, with younger individuals accounting for a larger share of annual expenditures. This trend is in line with the overall shift in the country’s population towards younger and more diverse demographics.

In addition, the jewelry data shows that Asian and rural consumers are also increasingly driving the jewelry market, with both groups seeing a significant increase in their share of total expenditures. This trend is likely due in part to the growing purchasing power of these groups.

Altogether, these changes in demographics are having a major impact on the US jewelry market, and companies will need to adapt their marketing and sales strategies to better appeal to these groups.

Are you interested in how these demographics changed long-term, or do you need demographics for a specific period?

For more details on the specific data behind demographics demand for jewelry in 2021, please contact us.

Jewelry Demand Sinks 11% in October, But Do Not Fret!