In early 2015, the retail market became very aware of lab-grown diamonds (LGDs). It’s not that no one had ever heard of them before, but this suddenly became a major topic. At JCK Las Vegas that year, most retailers voiced opposition to LGDs, basically saying that they didn’t want to be associated with them. However, only a year later, retailers, traders and most others voiced a different tune: “We will go where our customers want us to go.” Consumer market forces indeed set the tone.

On average, 1-carat lab-grown goods were priced 64% lower at wholesale than natural diamonds at the end of December

A closer look reveals some details that played a role in this shift in attitude towards lab-grown. For example, that retailer margins on LGDs were higher. Traders found that out too. Coupled with growing consumer demand for a lower-priced product promising to be the same (but more ethical, as the erroneous claim goes*), it was not long before the flood gates opened.

Currently, we are at a classic developing point established by many new products: after a very long period of slow development and very slow rise in use, followed by early adaptors raising demand and awareness, we are now at the stage where a walloping leap occurs as market adoption takes place. This adoption model was true for use of Google search queries, smart phone purchases, and the number of new Twitter users. The following graph shows how this worked for Twitter sourced from Plos One (and a highly recommended read if you want to understand the modeling of these trends).

I know that academic articles usually bore people to tears, and I have no intention of losing readership over this, so I’ll just say that this trend is the face of LGDs in the consumer market. Just to prove the point, consider the following graph of LGD sales beginning in 2015. The figures were small at the time, but the early trend was clear: within 18 months, LGD sales as a percent of all diamond sales didn’t just double or quadruple – they increased 8-fold.

The leap in adoption rate is not limited to consumers or retailers. Traders, manufacturers and other diamond industry players are getting into the lab-grown business too.

What Happened to LGD Prices?

In a bid to protect diamonds from the loss of market share, De Beers launched a new initiative called Lightbox in May 2018. One of the ideas behind this lab-grown jewelry program was that lab-grown diamonds should be priced based on a reasonable margin above their cost of production, and not on some artificial discount to natural diamond pricing.

Lightbox’s $800 per carat pricing was viewed by the industry as something that could possibly drive down LGD prices and, in turn, lower its positioning in the eyes of consumers to a mere imitation/replacement item. So, has Lightbox succeeded so far in forcing a price drop? The answer is mixed.

In August 2018, about three months after Lightbox was announced, and just before they started selling, my team and I interviewed LGD producers, traders and jewelry manufacturers about pricing. We found it to be pretty unanimous across the board – wholesale transaction prices were down by about 30-40%.

Prices were fairly stable into September after the LGD market already factored in the new prices and the hesitance that US retailers expressed in light of the pending launch of Lightbox. At that point, and pardon any self-promotion, we launched a wholesale transaction-based price list in response to growing interest in the market.

In the following months, something interesting happened. Prices of round LGD goods weighing 1 carat and more remained steady. Everything below, where Lightbox is active, saw prices continue to decline. The clear trend is that the smaller the goods, the less they declined. By the end of December 2018, the prices of quarter carats declined by an additional 12%, and 0.90-0.99 carat LGD rounds fell on average by more than 30%.

As the heat map below shows, the price changes are not the same for every color/clarity combination. One of the price trends is of very limited declines of lower color/better clarity goods in contrast to a deep price decline of goods that are lower color and clarity, as shown for quarter carats.

Just as with natural diamonds, price changes are impacted by a variety of forces, including availability and demand. In the case of LGDs, technology also plays a role. The smaller goods are HPHT, while the larger ones are CVD. These are two very different processes with different costs, issues, and pace of R&D.

Prices of LGD vs Natural 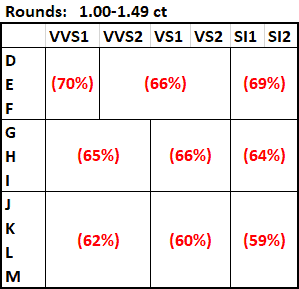 A common question in the market is by how much LGD prices are lower than naturals. Usually this question refers to retail prices. A quick comparison of retail prices show a price difference of 20-40%, depending on the specific goods and the retailers’ branding, market positioning, etc. Wholesale prices behave very differently. In the wholesale market diamonds are priced as a commodity. That makes for a much more accurate way of measuring price changes over time.

On average, 1-carat lab-grown goods were priced 64% lower than natural diamonds at the end of December, while third-carats were 75% cheaper. If you are wondering why the price gap in retail prices is so much smaller, the answer is simple: retailers are keeping a wider margin.

Demand for lab-grown goods is rising. Retailers from every segment except the very high-end have entered the market. Where Lightbox posed competition, prices declined. Not all of this is due to Lightbox, but it shows that when the industry fights, it can win. Currently, retailers have better margins on LGDs, giving them an incentive to keep promoting them to consumers.

If diamond companies want to preserve the market they are operating in, they need to wake up now and get going. Otherwise, the demise may be just around the corner. The economics of it are simple: most diamond mines produce a range of goods, from very small low-quality stones to large stunning beauties. But because miners need to sell the entire range to make their operations worthwhile economically, they won’t mine at all if they cannot sell low and mid-range goods. Without the basic goods, hardly anything else will be mined or offered.

In short, if the first graph here terrifies you, you understand that the industry needs go out and fight for its future success.

The Wholesale Lab-Grown Price List is based on transactions in the wholesale market, as relayed by lab-grown producers, manufacturers, wholesale traders and jewelry manufacturers. It covers round-shaped goods, broken down into nine size range categories from 0.23 to 2-carats, in D-M colors and VVS1-I2 clarities.

The price list is published quarterly, and is available to subscribers. For more information about the wholesale lab-grown price list and subscription details, please email me.

* I’m more than happy to make the case for natural diamonds and ethics anytime.