As we head to the Las Vegas shows in a few days, it’s worthwhile looking at the US jewelry market and the brands in order to understand what it’s going through today. The changes are many: some of them are slow-moving, whereas others are fast paced. Some changes have even slipped by almost unnoticed by many, but all of these are impacting the industry – retail and suppliers – enough to be worthy of our attention.

Since most of my daily focus is on the diamond industry, the focus here will be mainly from that perspective. To put it plainly, matters do not bode well for the industry at large. If it weren’t for the Chinese jewelry market, the global diamond industry would be in far more serious trouble. The US jewelry retail market is highly fragmented; when it is growing, its growth is very slow, it’s fiercely competitive, and with many businesses closing every year. Clearly, the American consumer is also not as in love with diamonds as in the past. 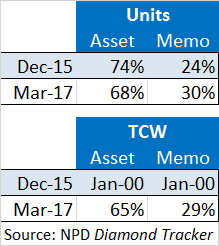 From the perspective of the diamond industry, this means that margins are thin, turn is slow, payments are delayed and at times skipped, and insecurity is a major component of doing business. In response, we are seeing several trends. The larger loose diamond suppliers, those that usually are manufacturers that have direct rough diamond supply from the largest miners and hold more power, are trying to reduce the quantity of memo goods. In contrast, the amount of memo is not decreasing but increasing: Measured by number of stones sold, the percent of asset goods purchased by retailers decreased from 74% in December 2015 to 68% in March 2017, while the number of memo goods increased from 24% to 30% during the same period. The remaining 2% are diamonds that retailers purchased from consumers, e.g. recycled goods.

By number of stones sold, the percent of asset goods purchased by retailers decreased to 68%, while the number of memo goods increased to 30%. This indicates a growing reliance on memo.

As for total carat weight (TCW), asset goods declined slightly from 68% during December 2015 to 65% this past March, memo increased from 26% to 29%, and recycled goods averaged about 5% during most of this period. This means that while the larger vendors are trying to cut back on memo, there are enough smaller (and may I add hungrier and more willing to take risks) suppliers that are providing diamonds on memo to a growing extent. This is a potentially dangerous trend, as we learned during 2008-2009 and at other times of financial difficulties. The other trend indicated by these asset vs. memo figures is that memo goods tend to be larger, and therefore pricier. This perhaps is not surprising, but is worth paying attention to because it represents a greater risk to suppliers.

Retailers: Before looking at how retailers as a whole performed, consider how the first quarter played out for some notable specialty jewelry retailers: Tiffany reported a 3% decline in sales in the Americas (mainly in the US) and a 4% decline in same store sales (SSS). Tiffany, an exceptionally strong brand heavily dependent on tourist traffic, and very high-end, is maybe an exception. Yet when Tiffany is hurting, everyone else should be worried.

Consider what took place at Sterling Jewelers. SSS decreased 12.8% although average transaction value increased 3.7%. This is because the number of transactions fell 16.6%. Higher-priced bridal jewelry as well as select diamond fashion jewelry and brands outperformed lower-priced merchandise. What should be noted is that sales at Sterling locations that are not in malls led this division. So, it appears that Sterling is bucking a trend: an analysis of overall jewelry sales in the US shows that consumers are buying more often, but at lower price points. Another notable trend is tied to the decline at malls. It’s not news that the mall business is experiencing great difficulties despite the improved economy and rise in consumer expenditures. Sterling is hinting that they are suffering from this issue, like many other mall-based businesses.

Branded diamonds’ better margins off a higher base means several hundred more dollars per stone. Sales turn is much faster too at 0.78, improving cash flow.

The takeaway is that between Tiffany, Kay and Signet’s regional store brands, we are seeing a good reflection of what the entire specialty jeweler universe is experiencing. The overall trend of more jewelry items for less is driven by the multi item stores – from Macy’s to J.C. Penney, to Costco and Wal-Mart. These multi-item retailers are gaining market share at the expense of specialty jewelers. The good news is that when it comes to diamonds, especially goods above 0.30 carats, consumers (brides included) are choosing to shop at specialty retailers.

Overall: Retailers sold a little more than 292,000 carats of loose diamonds during the first quarter of 2017 for a total of $1.64 billion, according to NPD’s Diamond Tracker, which measures the activity of 3,950 specialty jewelry stores all across the US. The total cost of these goods was $1.06 billion.

Top Sellers: For many years, the best-selling loose diamonds have been rounds, 0.70-1 carat in weight, in GHI colors and SI-I clarities. This is still very much the case today, as the following list of overall top 10 performers by number of sold diamonds shows.

In the $2,000-$3,000 price point, the top sellers during the first quarter were 0.50-0.70 carat round SI-I goods. These, like the overall top sellers, are pretty conservative choices on the part of consumers. No variation in shape or clarity, and little variation in color. These items should be retailer favorites, they have a very good margin on them, and they sell relatively fast, in about a year.

Among the highest price diamonds, those that average more than $25,000 at retail prices, the most popular were mainly 2-carat diamonds in EFG colors, VS2-SI. Here, we see some other shapes, including oval, which has enjoyed a sharp rise in demand during the past year. The margins here are slimmer, averaging 27%, and turn was much slower, about 22 months. 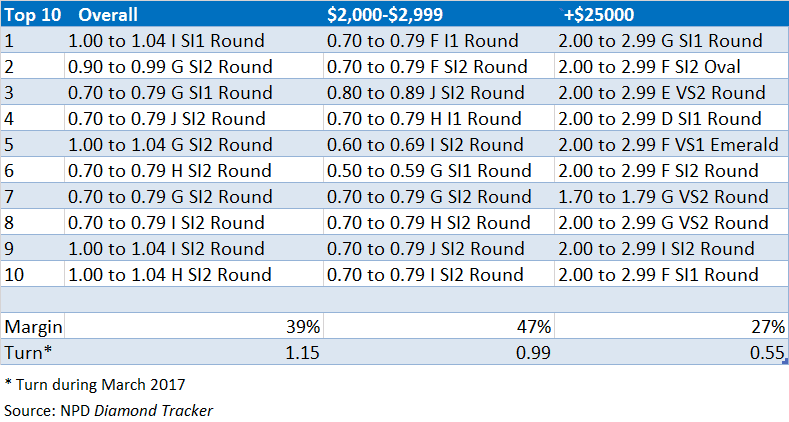 Branded: Retailers have discovered the power of branded diamonds. Or maybe, at long last, consumers are finally finding an allure in branded stones. Be that as it may, in terms of sales mix, sales of branded diamonds represented 11% of sales of all loose diamonds, up from just 6% just a year before. What is the allure of these stones for retailers? More cash through the register and better cash flow.

Branded diamond margins have been steady at around 36.5% with a much better return. Not only is the margin somewhat better compared to non-branded diamonds (averaging 35.8% in Q1 2017), it is off a higher base, which means several hundred more dollars per stone. Sales turn is much faster too. Branded diamonds sold on average 15 months from purchase (a turn of 0.78), compared to 18 months for non-branded loose diamonds. Helping the bottom line in such a way, it’s no surprise that retailers are showing a growing interest in branded diamonds.

Lab-grown offers retailers good margins and fast sell through, making them an attractive addition to their offerings to consumers.

Lab-Grown: Until a year ago, most retailers did not want anything to do with “synthetic diamonds”. Last year it became clear, maybe under duress of the tough US jewelry market, that retailers would no longer automatically turn down selling these stones. Instead, many agreed that they will go where their customers will take them, and if consumers are open to lab-grown (LG), at the very least, they should test this product.

In short – it shows. Not only are retailers responding to consumer demand, the trend here is reminiscent of the one we see for branded diamonds: better margins and faster turn. Sales by volume are up year-over-year. Sales by value are up 50% compared to the year before (but off a very small base).

Retail margins are 40%, a year-over-year decline; however, they are still higher than retail margins for all loose diamonds. Interestingly, retail margins are decreasing mainly because retailers are lowering prices. This is odd because the average cost of LG is rising. One possible reason for this eagerness to lower price is turn: average turn of LG during the first quarter was 1.12 or just 11 months, compared to 18 months for loose, natural, non-branded diamonds. 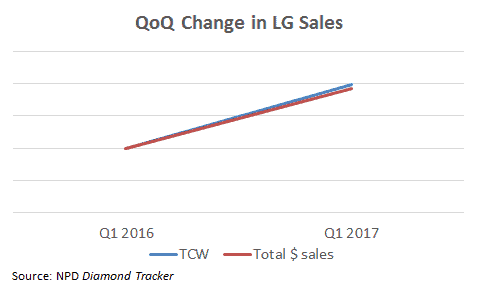 US specialty jewelers are in a tough spot, but trying to fight their way out by trying something new in what is otherwise a very conservative consumer market. The rise of branded diamonds on one hand, and of lab-grown on the other provides retailers with a way to improve margins and turn, and by that, give them a lifeline they were missing.

At the same time, some are not adjusting to the changes and are being forced out of the jewelry market, as attested by the decline in number of doors. The deteriorating state of malls is hurting many retailers as well. Which leads to the question – what should we expect from the Las Vegas trade shows this year? A safe guess is that higher-end jewelry, especially the more recognized brands as well as branded diamonds, will attract retailer attention and do well. Lab-grown looks set to take another bite into the business and grab more market share. Much hinges on the level of inventory at retail, as wholesalers’ willingness to lower prices further is very limited. I suspect it will be a mixed bag, yet, after the show, many will go home concluding it was better than the Las Vegas trade fairs they had in the last two years.

On a self-serving note, on Sunday, June 4 at 2 pm, I’ll be giving a presentation with Desiree Hanson on the US retail jewelry market, drawing from the NPD data. The presentation will be at Tradewinds C/D, Pool Level of Mandalay Bay, Las Vegas. See here for more details.

A Market in Chaos
Speaking Engagement: Understanding Shifts in the Luxury Market
Comments 2