A look at the recently released Kimberley Process (KP) figures for 2016 reveals several interesting trends affecting the global diamond industry. First is that the top five producing countries have lost some of their market share as diamond production plunged, fewer rough diamonds are going through China, and yet this is still a very concentrated industry from a country perspective. In some areas, it is even more consolidated than before.

This contrasting movement of volume and value is not a good outcome for diamond miners; however, it is a movement in the right direction as far as manufacturers are concerned. Diamond polishers in general would like to have more rough at a lower cost. The downside is that they don’t really need all these goods, to which their rising inventories can attest.

One of the greatest criticisms of the KP is that it falls short of its mission and does not succeed in tracking all cross-border movement of rough diamonds. The KP, just like any other system or organization, is only as good as its weakest component.

Even if just one country poorly reports diamond production or international trade, and most totals are off, affecting the report. Are there any such issues? It would seem that there are some weak spots, but overall the report is robust.

Those who deal with the day-to-day mechanics of the KP are expressing confidence in the numbers. The largest producing countries are operating fine. They have a number of clearly identified diamond mines, they track them well, and their inner country KP system works as it should.

While diamond production volume has declined over the years by an average of 1% a year, the average P/C value has risen by 4.1% every single year.

The DRC as KP Example

The issues start with poorer countries, especially those with scattered alluvial mining in remote areas. A prime example is the Democratic Republic of Congo (DRC). According to KP figures, the DRC produced 23.2 million carats in 2016, but exported only 14.7 million carats. Without any local polishing, the 36% difference between production and exports is alarming.

The obvious assumption is that rough diamonds had been smuggled out of the country. But that is problematic because if you want to smuggle goods out, you don’t report mining them in the first place.

Further, in 2015, the difference between diamond production and diamond exports was only 1%, a totally normal situation. While the value and volume of production leaped in 2016 (86% and 45%, respectively), the value and volume of exports did not change much. Therefore, it is likely that there is a technical error, that many of the goods may have been counted twice – first at the mines and then again when they arrived in Kinshasa.

Double counting would easily inflate the figures. The DRC is not known for its streamlined bureaucracy, and communication across this enormous country is far from easy.

Is this merely an honest mistake? The working assumption is that we are looking at a combination of smuggling and overzealous tracking. This would indicate that global production values are possibly somewhat inflated. After all, the DRC is a major producer, and a major error there would have a large impact on the totals.

If the DRC figures are perhaps misreported, a couple of other countries’ reports are downright odd. Liberia reported diamond production of 104,449 carats and exports of just 60,282 carats. This 43% difference is too large and definitely suspicious. In contrast, Sierra Leone and Tanzania reported the exact same level of production and exports – to the hundredth of a carat. This is an absolute impossibility and raises concerns that the figures were “straightened.”

Tracking rough diamond production and cross-border movement since 2004, the KP provides us with a 13-year perspective.

One thing that stands out when looking at global production is that its value fluctuates much more than its volume. Production volume has been fairly steady, especially since 2009. The average year-over-year change is -1%. 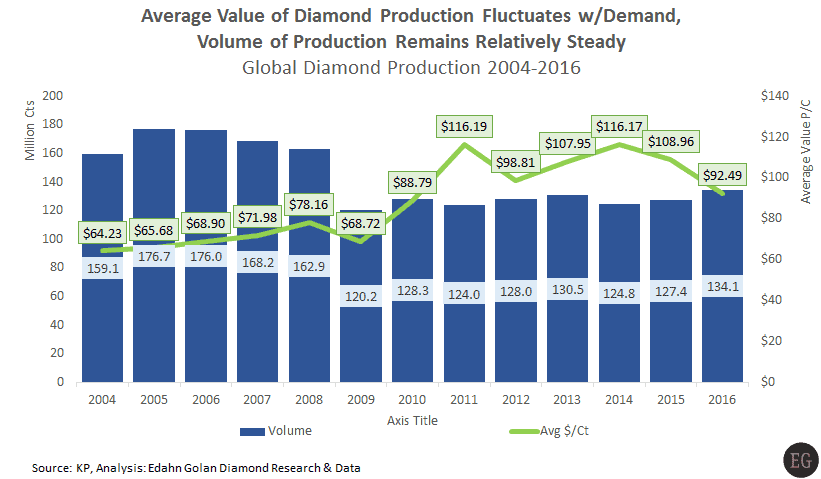 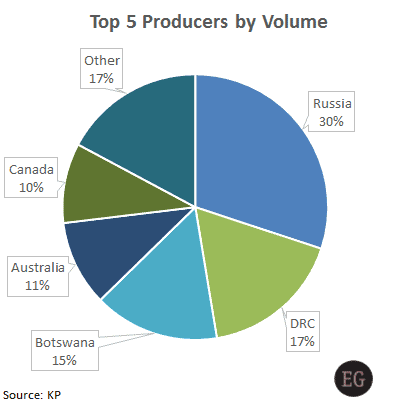 There were 23 diamond producing countries in 2016. While China and Cameroon produced only several hundred carats, other countries are major producers, responsible for most of the global diamond production.

The top five countries produced 10.2 billion worth of rough diamonds, 81.9%. In 2015, the reported value of the top five producing countries was $11.5 billion, 82.9% of total production. The decline in 2016 in part reflects ALROSA and De Beers adjusting their production. 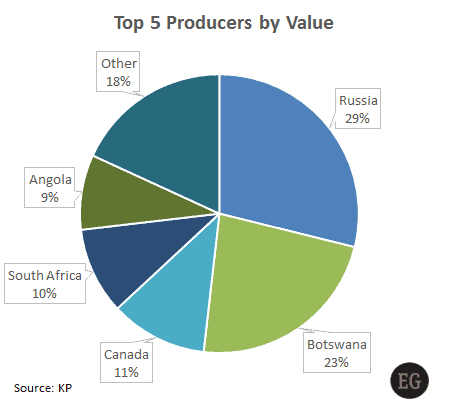 The 1% decline may seem nearly insignificant if it were not an ongoing trend. In 2014, the top five had a market share of more than 88%. 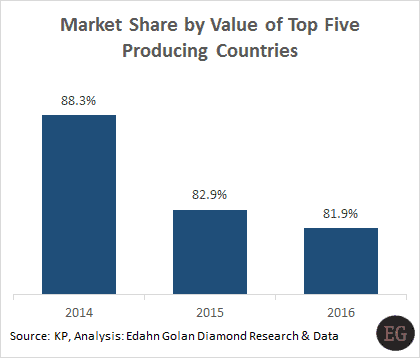 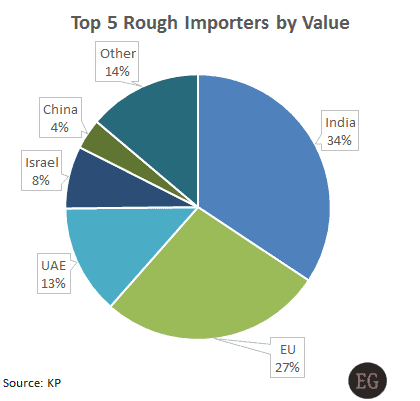 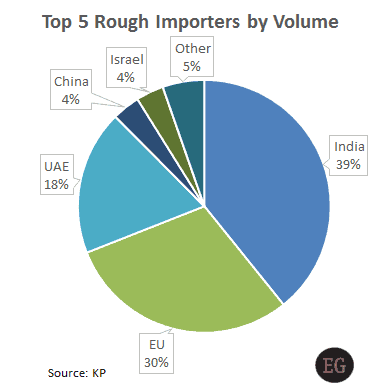 Manufacturers with polishing plants in Vietnam, Armenia, or Mauritius, for example, are either closing their facilities or shipping increasingly lower cost rough to them, all in the name of reducing costs and focusing efforts.

And Then There Is China

China is a powerhouse in nearly every economic sector. When the Chinese started opening up polishing facilities, Indian manufacturers got worried.

Historically, Amsterdam was the global diamond polishing center. However, after World War II (during which most of Amsterdam’s polishers were murdered by the Nazis), Antwerp rose to become the leading manufacturing center. This position was lost to Israel during the 1970s, who in turn lost it to India.

Many Indian traders were sure the Chinese would pull a similar coup. Fortunately for them, it didn’t happen, though not for lack of trying. Chinese companies took over diamond mining in Zimbabwe and shipped many of the goods to China. 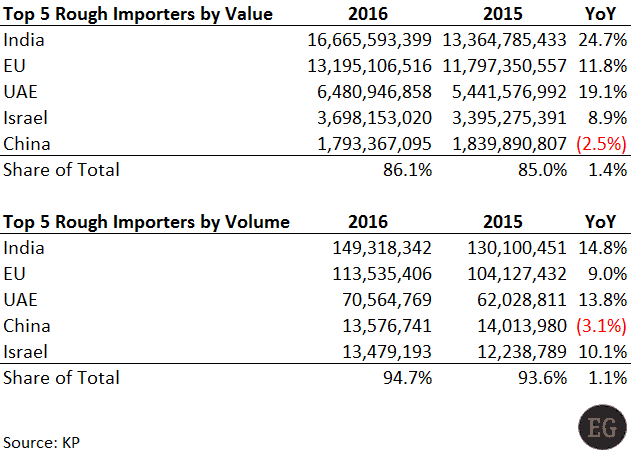 We are halfway through 2017, and it is already clear that the KP’s next annual report will look similar in some ways and different in others to the last report.

The four largest diamond miners – ALROSA, De Beers, Rio Tinto, and Dominion – produced more than 68% of the diamonds mined in 2016. All but Rio Tinto have increased production this year, so expecting higher production in 2017 is reasonable.

As rough diamond prices are inching up, an increase in total value is possible too, but this is not set in stone. Most of the mined goods are smaller, lower value diamonds, and the price of many of them is not rising. The strong demand for rough diamonds seen in January and February has cooled.

Currently, ahead of the July Sight, pre-Sight trading is all about moving on the rough and not to get stuck with it; thus, many items are offered in advance for no premium. This could lead to an overall decline in value of diamond production by year’s end.

Unless the industry miraculously makes a turnaround and starts cranking out more polished diamonds at a decent margin, further consolidation is expected. We are already seeing fewer people and companies in the midstream, and a further consolidation of manufacturing capacity is expected. This includes closure of less important polishing facilities outside the main manufacturing centers.

Although not part of the KP, consumer demand for diamond jewelry is what is driving miners in Siberia and in the African bush to get up in the morning and extract billion- year-old diamonds from the ground.

Consumer demand is shifting; American consumers want more of the same goods by color and quality, but in smaller sizes.

Demand in China is picking up, and consumers are becoming more open to lower quality and color goods than those demanded in the past. This is a big opportunity for the diamond industry.

In India, demand is not picking up, and in Japan, it is shrinking.

Collectively, there is a chance to improve polished diamond sales in 2017, but by the way things look now, it is clearly a struggle. Almost a cliché, but true, much of the year’s outcome hinges on fourth quarter demand, which has been shifty in the past decade. There is a dire need for marketing, and the DPA’s enlarged budget of $58 million is an important step in the right direction.

So is anything in the industry going well? Branded diamonds. While branding efforts won’t have a noticeable impact on production, if you’ve made it this far in the article, you’ve justly earned an extra bit of information.

What Set Up the Latest Bankruptcy?
The Scary Stuff Nightmares Are Made Of