Anyone who has ever done a back-of-the-envelope calculation of the US fine jewelry market in the past few years arrived at figures that were far below the official numbers published by the US government. The differences were so wide that the government figures were downright puzzling. Recently, the US government has revised ten years of market estimates, dating all the way back to January 2008, shaving off more than $16.5 billion in jewelry sales in 2017 alone.

There is no need to be surprised at the revision, or by this radical reduction.  The US government revises its jewelry figures every few years, usually downwards. The last time it did so was in 2015. But unlike the 2015 revision, this one was far-reaching. There is no point being shocked by the old figures for being so out of whack. We have been stating that for a few years. In fact, the current figures are still somewhat inflated.

Why Is This Important?

Knowing the true size of the market has great importance for the industry. It impacts bank lending, manufacturers’ planning and even assessments of investments in the industry.

Knowing the true size of the market has great importance for the industry. It impacts bank lending, manufacturers’ planning and even assessments of investments in the industry. Therefore, tracking these figures, understanding what they represent, and having confidence in their accuracy is central to understanding the business.

For example, most people believe that the jewelry sales figure represents only fine jewelry sales, while, in fact, it is jewelry in general. Both high-end diamond jewelry and $4.99 silver earrings set with CZ are counted in these figures, as well as pewter figurines. So to understand the jewelry figures, remember that even if all sales are counted correctly, we still need to apply a certain discount.

How and Why This Happened

There are a number of ways to calculate the size of the US retail jewelry market. If you are the US government, the easiest would be to start collecting sales figures of public specialty jewelry retailers such as Tiffany, Sterling (the US arm of Signet) and Blue Nile, and by measuring sales of privately held retailers, which all report their sales to, you guessed it, the US government.

So how did the US government get it so wrong? Simply by not measuring sales.

Next, it should have collected jewelry sales from the rest of the market – department stores, discounters, online retailers, etc. This is not easy, I know because I have done it myself (checkout the National Jeweler’s State of the Majors for some of my estimates), but the US government has great resources that should make this task a lot easier.

So how did the US government get it so wrong? Simply by not measuring sales. Instead, it estimates local jewelry manufacturing, adds to it some import data, runs the figures through a calculation, and presto! It gets the wrong numbers. Worse, it adds several additional components that only throw off the figures even more.

Over the years, I have spoken more than once with the government agency that puts out these figures (the Department of Commerce’s Bureau of Economic Analysis). They were kind enough to share with me their methodology and discuss it, but were steadfast that they have it right.

As wrong as the jewelry sales figures are, even more disturbing are the watch sales numbers. For years, watch sales have declined worldwide and in the US, until they started rising again in 2017. According to the government data, prior and post-revision, watch sales have only increased since 2009. Although the revised figures show a decline in growth, we still know them to be wrong. Just look at Swatch’s sales figures in the past decade to get a good sense of what has happened in that industry.

The New Official Size of the US Jewelry Market

The revised figures are still high, and if you are interested in finding out the true size of the market, with a full breakdown by type of retailer and scope, feel free to drop me a line.

According to the latest government figures, fine jewelry retail sales in 2017 were $63.8 billion, 20.6% less than the previously reported $80.3 billion in jewelry sales.

The good news is that, according to the revised data, the US market for jewelry has increased steadily since 2009, after the Lehman Brothers financial crash. The increase in sales is measured, which we know is true. Year-over-year, jewelry sales have increased 5.1% in 2017. This is less than the previously reported 6.8%, but closer to what most retailers will report. 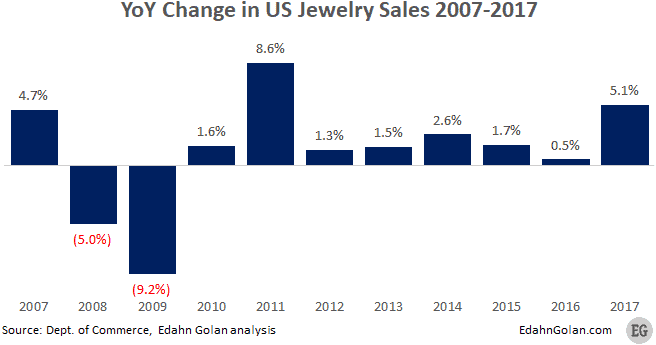 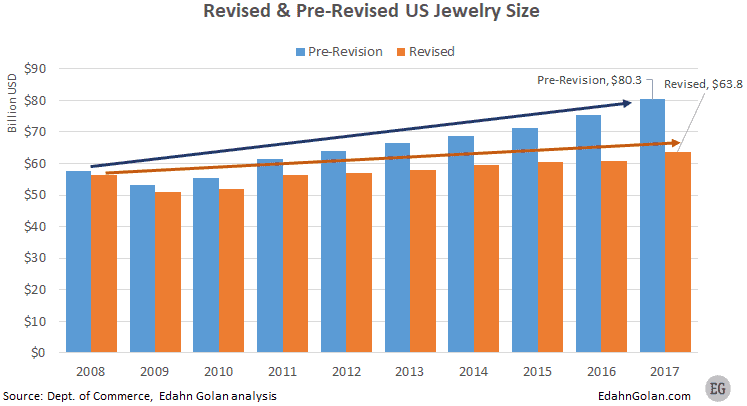 Another finding of the revised data has to do with the rate of recovery from the 2008 financial meltdown. According to the previous figures, it took less than three years for jewelry sales to recoup. The revised data shows that only in 2014, seven years later, did jewelry sales catch up with pre-crisis values. Again, this more closely matches what retailers have reported.

This 43% drop in the average growth rate during the 1980s and ‘90s, followed by a 60% dive in the last 18 years would give any industry a nose bleed and is the reason why so many businesses are closing. Jewelry sales are losing share of wallet, meaning that consumers’ purchases of jewelry represent a declining percentage of their total expenditures. Clearly, the jewelry market needs to wake up to this realization and do something about it.

In the first half of 2018, jewelry sales in the US totaled $30.5 billion, according to government estimates. It forecasts total 2018 jewelry sales at a little more than $68 billion, a 7% year-over-year growth. However, if there is anything we can conclude from these government figures over the years, sales will in fact be lower, and the rate of growth more moderate.

In July, jewelry sales rose to an estimated $4.8 billion, according to the latest government data. Once again, this figure should be taken with a grain of salt. It represents an 8.7% year-over-year increase on an annualized basis.

During the first half of 2018, sales by specialty jewelers totaled $15.74 billion, according to the US Census Bureau, another government agency tracking retail sales. This data was also recently revised, although just the last two-and-a-half years. According to it, sales have increased 13% during the period compared to January-June 2017. As with the total US jewelry sales, expect these figures to be revised in the future. 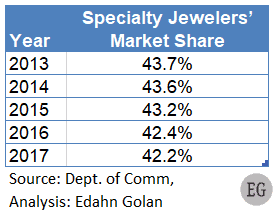 This may seem like good news for this sector, but a wider examination reveals that the general trend of an ongoing shrinking market share for all specialty jewelers (not just the largest and better performing ones) is still there – in the last five years, specialty jewelry retailers lost 3.4% of their market share. It is not a forgone conclusion that they will fall below 40% in the next few years.

The US government uses an odd system to estimate retail jewelry sales, which leads to inflated results. Over the years, their error between real and reported sales tends to grow. The revised jewelry figures more accurately reflect real sales figures (but not the true watch sales figures).

Our own view of the US retail jewelry market is that it is going through a transitory stage. While this is always true, the current changes are greater than we have seen in over a decade:

With all this in mind, some retailers are adjusting to the changes, but not all of them, including most specialty retailers. Those that know how to adapt will do far better than the rest. Therefore, access to modern data analysis, understanding of consumer taste shifts, segmenting consumers more accurately, and managing daily store operations more accurately will allow these retailers to serve consumers better. When that happens, the kind of market growth seen in other industries will be seen in the jewelry industry as well.