According to a new survey of the US consumer market, even though Americans increased fine jewelry and watch purchases in 2014, the rate of growth declined. This reaffirms other indicators that while 2014 was a year of growth, it was a stunted growth.

Jewelry Expenditure: A Ray of Light

This decline in the rate of growth is a worrying trend; however, it does hide some good news. Based on the survey findings, not only is spend on jewelry and watches maintaining its share of wallet, it is possibly even increasing.

The fact that total expenditure by Americans did not increase much in the period may explain why spending on jewelry was stunted. It also must be kept in mind that the jewelry industry is not a very large one (Americans spend more on pet food than on jewelry), and the margin of error in the survey is large enough to swing real share of wallet in either direction – growing or shrinking.

The steady yet slow growth of the American economy, which suffers from a lack of growth in salaries, seems to have impacted Millennials in particular.

Total spending by this age group fell 3.8% year-over-year. No wonder then that after a period of being the biggest spenders on jewelry, the 25-35 age group spent near to average in the 2013-2014 period compared to 28% above average in 2013 alone. This means that the sharp drop in purchasing took place in the first half of 2014.

On the other hand, the 45-54 age group, the tail end of Baby Boomers and the early Generation X-ers, are enjoying above average income per household and are spending 87% more year-over-year on jewelry and watches.

Although jewelry spend is based on taste and fashion, consumer habits in 2014, at least during the first half of the year, suggest that, as always, the economy plays an important role in deciding how much we are spending on jewelry. This is not to say that the jewelry pipeline is powerless – on the contrary. Much can and should be done to boost interest in jewelry. 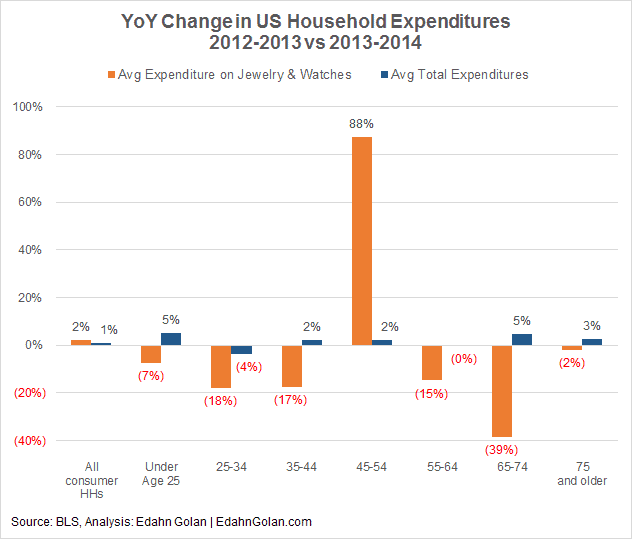