Israeli bank financing of the diamond industry was cut by 33% in 2020, falling below $500 million for the first time in 30 years. The decline reflected shrinking activity in 2020 and a decline in reliance on bank financing. But mostly, it reflects banks’ balking at dealing with the complications of working with diamond firms.

According to the Bank of Israel, Israeli bank financing totaled 1,733 million NIS, or $498.75 million, in the fourth quarter of 2020. This is a 6.8% decline in bank financing compared to the third quarter of the year.

In 2014, Israel’s Bank Leumi announced the closure of its New York City branch. Leumi’s pullout came at a time when the industry was on a moderate growth path and experiencing financing increases. In retrospect, it was the first sign of what has become an ongoing reduction in Israeli bank financing.

Some 16% of Israeli bank financing was allocated outside of Israel, mainly to Israeli firms. In late 2017, this financing to diamond firms abroad came to a near full stop, down from $50 million to less than $19,000.

Since its peak in 2005, Israeli bank financing to the diamond industry has dropped a massive 77% in nominal value. This rolls financing back 30 years to its 1991 levels. 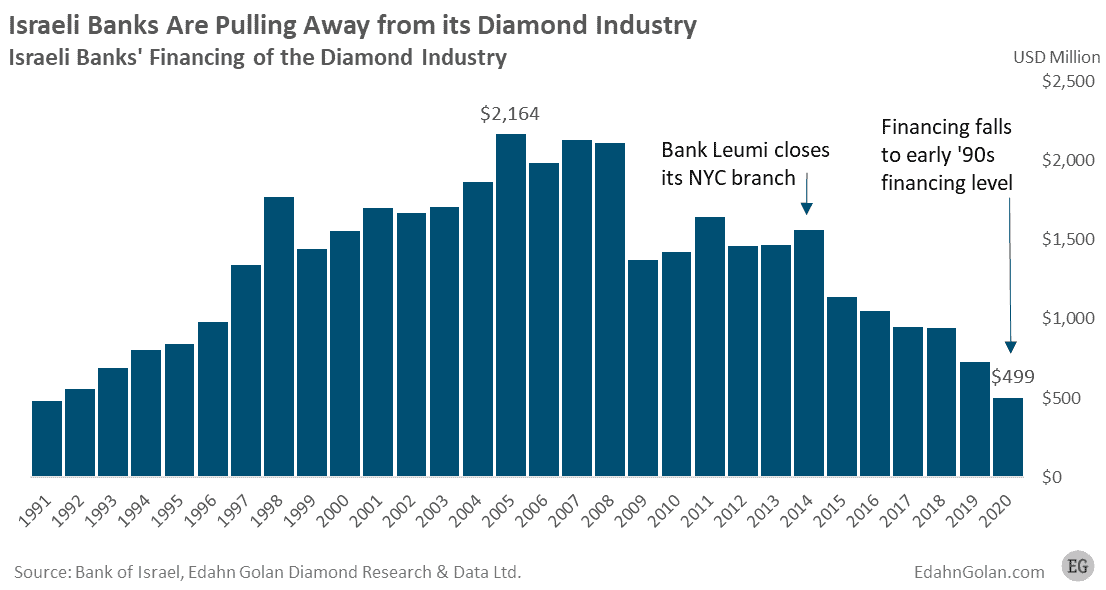 Diamond firms are famously resilient with few bankruptcies occurring in the past year, which is why banks aggressively courted diamond firms during the pandemic. But there was another reason for banks’ interest in diamond firms in 2020 – financing diamond companies is a very profitable venue for them.

At the same time, the Israeli diamond sector has constantly been shrinking. Gross polished diamond exports of $12.9 billion in 2010 fell to $9.7 billion in 2019, and to just $4.5 billion in 2020. Net exports have been slashed by half in the last six years.

With decreased activity comes a decreased need for financing. That said, diamond traders would argue that the decrease in Israeli bank financing has contributed to the decline in activity.

Side Effects of Decreased Competition

In 2019, Union Bank was required to sell its diamond financing activity as a condition to its merger with Mizrahi Bank, unveiling the changes to its diamond portfolio.

In 2016, Union’s diamond account was estimated at some $400 million, according to court records. By 2019, this had shrunk by nearly two-thirds to $140 million. At the time of its sale to Peninsula late last year, Union’s diamond portfolio was reported at just $53.4 million, an 87% decline since 2016.

Although this is an extreme case, it reflects the drop in credit availability to the diamond sector, as well as the loss of attractiveness to banks. It is one of the reasons why Union’s diamond portfolio was sold to Peninsula, a non-bank financial institution, instead of to another Israeli bank.

One outcome of this sale was a decline in competition between banks. With fewer banking players, the result is reduced financing and financing also became pricier. 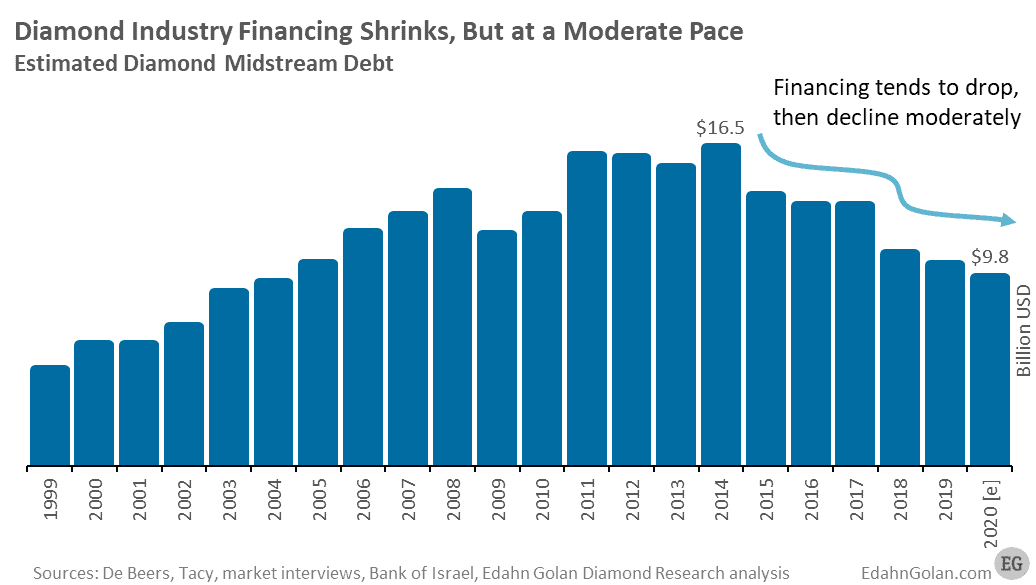 And while decreased debt is healthy, we must ask ourselves about the wider implications, including the ability to invest in growth, development, and marketing.

If you are interested in learning more about diamond industry financing and more details on the specific data behind these trends, please contact us.

Are We Heading Towards a Diamond Price Bubble?
How Much Are We Really Spending on Diamond Engagement Rings?