From top to bottom, the diamond market is changing, and in most places the change is anything but positive. The upcoming Sight, business failures in India and Israel and the languishing retail market all have issues. Not all is bad though, there is some good news as well.

Rough Diamond Market: Worry about the Next Sight

The upcoming Sight is planned to be another large one, estimated at $600 million or a bit more. While this Sight is not so large compared to previous Sights, given the current state of the diamond market – large inventories of rough and polished stuck in the manufacturing and wholesaling sector, combined with recent defaults and the sluggish retail market – how much rough is really needed these days?

Sightholders are deferring about 25% of their Sight 6 ITO to August.

The ~$600 million figure is an estimate based on the ITO for the upcoming Sight – Sight 6. When first submitting their requests, Sightholders asked for a large ITO in July. Perhaps they didn’t have much choice; maybe they believed the market would improve.

Currently, however, Sightholders are deferring a large chunk of their ITO, about 25% of the goods by value, to Sight 7 at the end of August. Many don’t see the market or liquidity improving by then, but whatever delay in having to buy rough that they can manage is welcome at this time.

There is a certain tendency in the market to view De Beers as rather blind to what is happening downstream. I’m not sure that is really the case. Prior to Sight 5 last month, De Beers announced it had some shortages, and would not be able to supply the full ITO.

The upcoming Sight is expected to be about $400 million.

Now, two weeks ahead of Sight 6, De Beers has once again informed clients that due to shortages, certain goods won’t be supplied. While mining is somewhat unpredictable, and changes in the composition of production do happen, there is a growing feeling that these shortages are really a way to cut supply a little without saying so outright.

Altogether, between the deferrals and shortages, the upcoming Sight is not expected to be as large as many fear. It’s hard to put a number to it, but $400 million is probably a reasonable ballpark figure.

This is still a lot of goods for the market to digest, but far from what is expected to happen in August. The ITO for Sight 7 is substantial, and with the 25% deferrals from the July Sight, it will be even bigger. Sightholders are already saying that if the situation doesn’t improve, then they’ll have to refuse many goods.

Rio Tinto announced this week that it completed the sale of its Murowa diamond mine in Zimbabwe. The announcement was brief, but the story behind it is significant. It’s not that Rio Tinto sold Murowa as part of a wider strategy to exit the diamond market. It is all about exiting Zimbabwe.

The ITO for Sight 7 is large, and with the 25% deferrals from the July Sight, it will be even bigger.

Between the uncertainties stemming from the government’s actions to the bad name the country has in the eyes of consumers, Rio made a decision that seems to make economic sense. The question remains as to how the new diamond mine owner intends to market the goods. The appetite from the Indian and Israeli markets has declined due to the current market and they are curtailing rough diamond imports. Whatever path they choose, without the good name that came with it being a Rio Tinto mine (which enabled to the company to export during the bad days of the Marange boycott), it will be a challenge.

Besides bearing on the market and adding to the difficulty to pay, the psychological effect here is tremendous. Almost everyone is talking about it. They want to know who is owed money, and if one was a client, the anxiety level only has increased. People are worried about how bad debts to other companies will impact their own, who may be next in line to call it quits and where all of this is going in order to prepare themselves.

The two latest business closures captured the headlines. Yet there were several others that happened with a lot less fanfare or media attention, increasing the debts to the industry and the banks.

To keep businesses running, some Indian company owners are resorting to selling other holdings, such as land and real estate in Surat, so they can bring money “from home.” The diamond market’s manufacturing sector is clearly going through a very difficult, unhealthy period.

Not only in India are businesses closing. In Belgium and Israel, a number of companies are experiencing difficulty in making payments, have gone bankrupt or have simply closed. This is a global pandemic. Even in the producing countries, manufacturers that set up polishing plants at De Beers’ encouragement are reconsidering their options.

In this context, the news that De Beers will increase local supply in Namibia from 10% to 25%-30% is surprising. One of the earliest signs of the current crisis were the difficulties at the beneficiation polishing factories in Southern Africa. The cost of manufacturing is high at these plants and the lower cost rough, which is not economical to polish at these facilities even in the best of times, is not always allowed to export to India and China. So why increase the allocation, especially in this market?

You may argue that the current market situation is temporary, and an improvement is bound to happen. However, manufacturers have found out a long time ago that polishing in Namibia and Botswana is at best an investment in getting rough. As far as polishing for a profit, it is not the soundest investment, which is why many have sold, closed or downscaled their polishing operations in Southern Africa.

A Ray of Light?

In spite of all the doom, gloom and pessimism, there is one figure that may indicate a change in the consumer market although it might be a false indicator from the perspective of a jewelry industry analysis. According to the latest data from the US Department of Commerce (DoC), overall fine jewelry sales in the US have increased by 0.5% year-over-year in May. Compared to April, sales increased 3.2%. This is the first increase in sales in seven months.

Based on this and a jewelry market analysis, we estimate US fine jewelry sales at $6.3 billion in May. Here is the caveat: in the past, the DoC has revised its figures retrospectively, and usually when it does, it revises jewelry figures downwards. Another reason for a cautious outlook are the watch sales figures, which are down for the eighth consecutive month. The purchasing trends for fine jewelry and watch sales tend to be aligned. 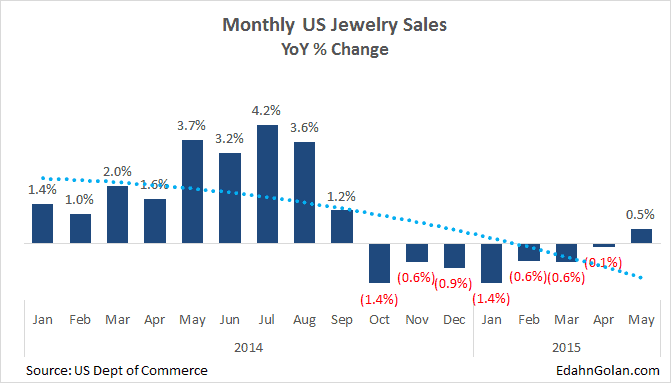 Meanwhile, the latest Jewelry Producer Price Index (JPPI) and Jewelry Consumer Price Index (JCPI) were released a few days ago. They show a further decline in prices – both those charged by US jewelry makers and those paid by consumers.

In May, the JCPI declined 1.3% compared to April, and fell 3.6% year-over-year, according to preliminary figures. Year-over-year, consumer prices have been declining for the past 20 consecutive months. Some of this was driven by a decline in the price of gold and diamonds, and some by consumers’ growing preference for lower-price items over higher-price ones.

The Bottom Line: A Deep Crisis

The takeaway is that the entire diamond jewelry pipeline is in deep crisis. Consumers are not hungry for the product, retailers are selling less, manufacturers are in a very bad financial state. The result is a growing number of business failures and producers are sitting on a pile of goods that is desired by fewer and fewer people. Something needs to change, and the change is as urgent as it must be drastic.