From retailers in Middle America to jewelry manufacturers in India, from polishers in Israel to rough traders in Antwerp and miners in Africa – the global diamond industry seems tired, pessimistic and gloomy. Everyone in the pipeline is seeing their sales decline and their turnover shrink, with improvement resting on a distant horizon – constantly receding. It seemed that no one was really taking care of business. However, there is a glimmer of hope out there.

Sight 6 was originally estimated at $600-$650 million, based on the ITOs. Now it looks like the ITO was even lower: $500 million plus another $50 million in specials, perhaps because of very large deferrals.

In practice, the Sight was less than half of this figure – $150-$200 million after Sightholders exercised their deferral options and then rejected most of the supply. One way or another, Sightholders elected to not buy some 60%-70% of the Sight in July.

Some Sightholders collected only a box or two of their entire Sight. Some deferred some of their goods and refused everything else, buying nothing at all. Some did not even bother to show up at the Sight. Companies, that in the past hardly looked at the goods and took everything as is, now refused large quantities of their supply. This level of disinterest in buying has probably never happened before.

Thus, it is a watershed moment for the industry. In March, Sightholders refused about 30% of the Sight, and that was rare, giving some Sightholders a sense of accomplishment. This time around, it is not about how they feel, but what they have evolved into. In the words of one Sightholder, “The people listened to [De Beers CEO] Philippe Mellier’s advice, ‘I take care of my business; you take care of yours.’”

Mellier made that point a number of times in the past months, and Sightholders, an adaptive group of people if there ever was one, heard him loud and clear. It is a watershed moment because Sightholders, who have stated for months that their supply was not economical, yet who kept buying, decided to take a very economical step and simply not buy what didn’t fit their needs. That takes care of their business.

From a Sightholders’ perspective, the recent large refusal makes sense. If the resulting polished is not selling, or if their inventories are high and not declining at a rate that justifies buying more rough, or if the price of the goods is not allowing them to turn a profit, then the refusals are sensible. But what is good for the manufacturers is not so good for De Beers.

More Than a Billion Dollars in Lost Sales

Following the March Sight, it was estimated that more than half-a-billion dollars worth of rough diamonds were refused and left in De Beers’ hands in the first quarter of the year. At the last Sight, another $300-$350 million worth of rough was turned down.

De Beers lost about $1.3 billion worth of sales at the first six Sights of the year.

On a consolidated basis, this decline is 4.8 million carats. At an average value of $206 per carat, De Beers lost about $1 billion worth of sales during the first five Sights of the year. Add the $300-$350 million that were turned down at Sight 6, and this number swells to $1.3 billion – a hefty figure for a company that had $7 billion revenue in 2014 and a lot of inventory to sit on.

De Beers raised prices on some goods at Sight 6, and lowered them on others. Some price changes made sense – a depressed item, a change in assortments, etc. – the usual type of price adjustments. But these are not regular times. Overall, De Beers keeps lowering prices, but at times, there are large question marks. For example, a couple of still marginally profitable boxes had their prices increased, not leaving Sightholders with any pockets of profitability.

One insider explained that the company is trying to keep its price index from sliding, so prices are hiked wherever possible. Taking a broader view, the impression is that something more drastic needs to happen. In 2009, at some point De Beers offered a wide range of goods mixed together and sold these at a single price. This way it was difficult to see where price declines really took place, which did not hurt the value of inventory as much. Now there is a desire – or at least a suggestion – that De Beers do the same in August.

De Beers’ price index declined 4% during the first half of 2015, but their realized selling price was 7% higher.

Another suggestion is a drastic price reduction, a move that aligns rough prices with polished and restores manufacturers’ profitability. The number bouncing around is a 20% price reduction. Under such a scenario, everyone will pay a price – De Beers, Sightholders and wholesalers – a drastic and painful measure akin to undergoing urgent surgery in which the pains are outweighed by the benefits of healing.

This is so drastic, that it may even lead to a string of bankruptcies. In the quarters where this idea is entertained, it is not viewed as necessarily bad, on the contrary. “Let it be,” one person said. If I had to guess, many would agree that bidding farewell to companies viewed as not managing their inventory well is perfectly acceptable to them. It also will decrease competition.

With so much bitterness among Sightholders, a wide-scale price reduction is acceptable and wanted by most of them. The element that needs to be kept in mind is that a price reduction is not a goal, but a sign and a tool – a sign that demand has declined and a tool to bring back profitability.

There is an increasing level of online chatter about the diamond recession, mostly coming from India, the global manufacturing center of diamonds. Most of it, on Twitter and Facebook, has been reporting more layoffs, and sadly even about a few suicides.

The Indian labor force, especially small-scale independent outsourcing folk, as well as smaller companies, are paying a dear price. The consequences are far reaching. A family that loses a father is a huge tragedy, and we need to remember that.

Last week Anglo American reported that De Beers’ diamond production decreased 6% to 8 million carats in the second quarter, mainly due to lower grades and reduced plant availability at Orapa. Production was marginally reduced at the Venetia and Jwaneng tailings treatment plants in response to softer trading conditions, according to Anglo.

Production was in fact lower in every country where De Beers mines. In Botswana, production decreased 6%, in South Africa it was down by 5%, in Namibia production fell 15% and in Canada 11%. 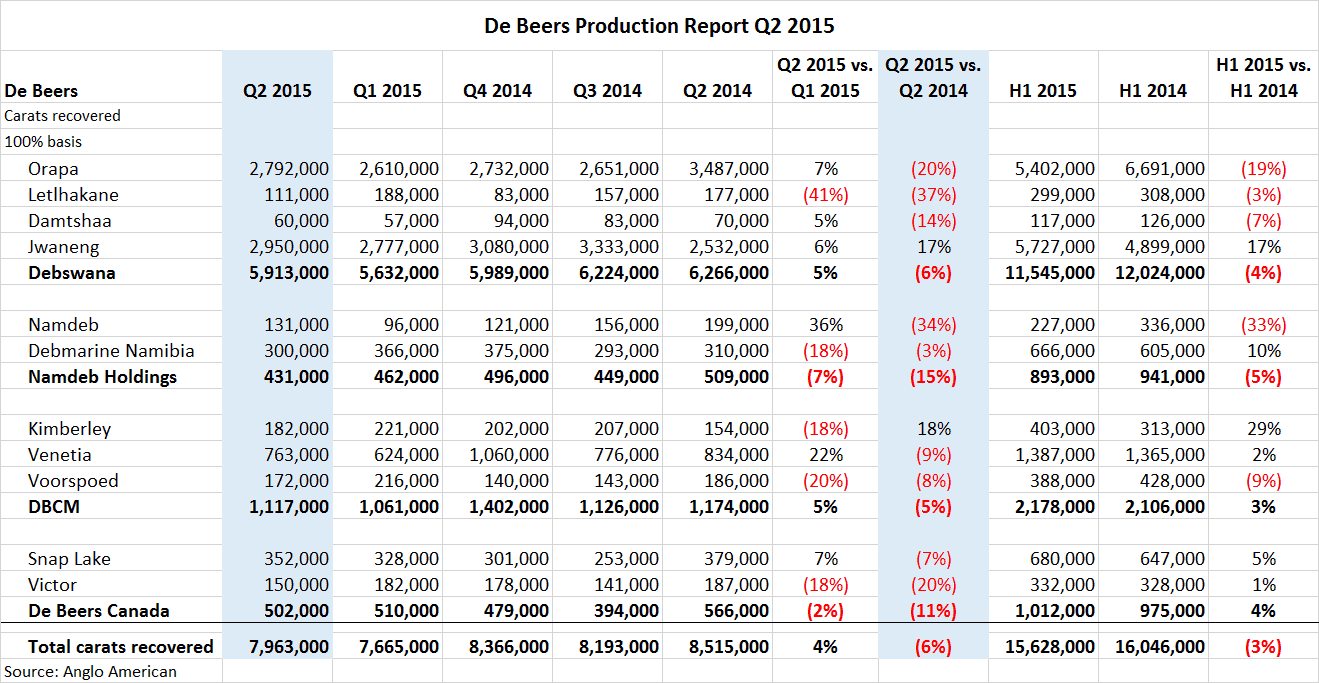 According to the Anglo report, the decline in sales reflected lower restocking demand from clients. As for prices, while the De Beers rough price index was on average 4% lower during the first half of 2015, their realized selling price was 7% higher, achieving $206 per carat. This, the company said, was due to a higher quality product mix sold during the first half of 2015 compared to H1 2014.

US Retail: Sales Rise, But Not for Jewelers

Sales by specialty retailers declined for the eighth consecutive month, down 4.4% to $2.7 billion in May. Specialty retailers continue to suffer from a decline in business in the US, although jewelry sales showed a small improvement in May, the latest month with known data.

That month, overall fine jewelry sales in the US made their first increase in eight months, up 0.5% to an estimated $6.3 billion. A major factor boosting jewelry sales was that on May 10, Americans celebrated Mother’s Day.

While this is bad news for specialty retailers, for manufacturers and wholesalers, there is a bright spot – for the first time since September, jewelry sales posted a rise. Is this the light at the end of the tunnel the diamond industry has been waiting for? The answer will be yes if a pickup in demand from retailers is noted ahead of the November-December Holiday Season.

Jewelry prices continue to decline, even though overall fine jewelry sales increased in May. This reflects a number of trends in the US retail market:

As stated several months ago, the current trend is less for more [link to US report]. Since October 2013, the combination of these three trends has been dragging down the Jewelry Consumer Price Index (JCPI), which tracks real sales prices.

ALROSA may be more flexible with price adjustments than De Beers, but the company took a similar beating in the rate of lost sales. The diamond miner sold 18 million carats of diamonds for a total of $2.1 billion during the first half of 2015, a 22.2% year-over-year decline.

Gem quality goods sold at an average of $176 per carat in the second quarter. During the same period, rough diamond prices were reduced 3%, down 6% since the beginning of 2015.

The ramp up of Argyle Underground pushed Rio Tinto’s diamond production forward in contradiction with market demand. Production at Argyle leaped 34 percent year-over-year in the first half of 2015, the company reported.

In line with that, selling Murowa last month won’t put a dent in the company’s annual diamond production. In 2015, Rio Tinto expects its share of production to be 20 million carats, a 44% increase compared to 2014. 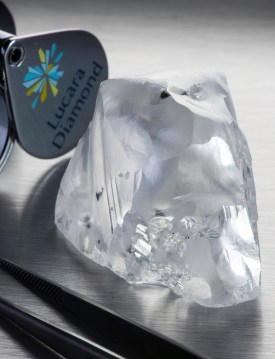 The results of Lucara’s auction of 12 large diamonds that sold for more than $1 million each were surprising. At a time when diamond prices are especially soft, several large stone traders were willing to pay high prices for exceptional rough – large diamonds with high color and clarity.

This was not only the case at Lucara, but also at Okavango Diamond Company’s (ODC) tender. Although some of the large diamonds at ODC did not sell, several did sell for strong prices. This is testimony that even though consumer demand seems very weak, high-end goods are in continual demand and will sell for top dollar.