Getting engaged and buying an engagement ring is a key life event. Purchasing engagement rings, especially if you are in your 20s, is usually the first time you buy a major diamond jewelry item. As such, it typically leads to many questions about the purchase.

The Current Average Price of a Diamond Engagement Ring

Based on an analysis of sales by more than 780 independent US jewelry retailers, in the fourth quarter of 2020, the average spend on a diamond engagement ring was $3,726.

This figure represents the average retail price of tens of thousands of diamond engagement rings sold in the US during October-December 2020. 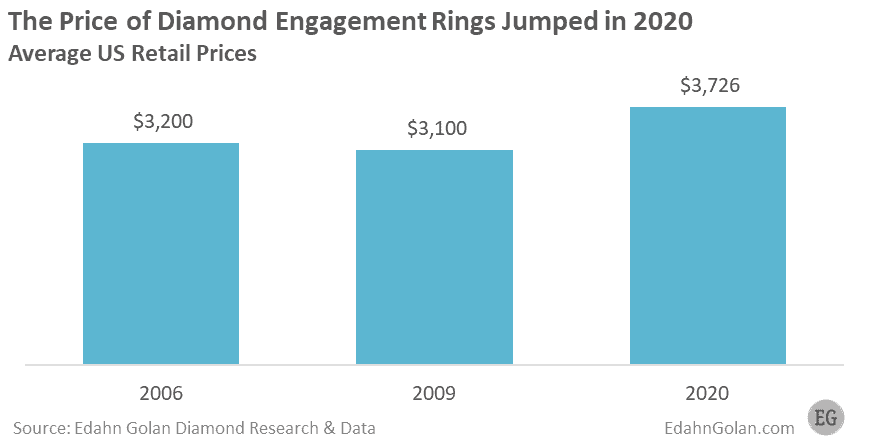 During the past couple of years, we found the average price was fairly steady. So why the unusual jump? One possible explanation is COVID-19.

With no travel options, delayed weddings and proposals, plus a much-reduced expenditure level during the year, consumers had both desire and ability to spend more. For jewelry, it was the story of 2020.

Another possible explanation is that compared to chains such as Kay and multi-item retailers such as Macy’s and Wal-Mart, independent jewelry retailers tend to sell higher priced jewelry.

The average annual income in the US is about $63,860 pre-tax. This translates to an average three-month salary of $15,965. Stated another way, the typical expenditure on a diamond engagement ring is less than the after-tax monthly salary of $4,600.

But what about the average salary of a person early in their career and yet to reach the national average salary? Let’s break it down.

I hope that settles the three-month salary debate.

A rising competitor to diamond engagement rings are rings set with lab-grown stones. With the same chemical structure, lab-grown are far lower cost gems, ranging at 20-40% lower retail prices (although at wholesale transaction prices, lab-grown are 60-80% lower than natural diamonds). 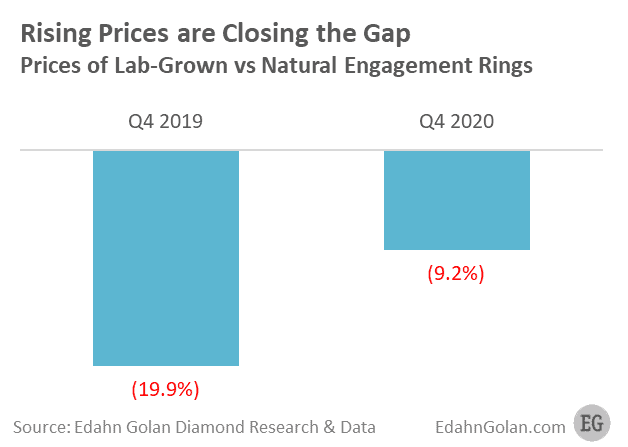 Engagement rings are not limited to diamonds. Sapphires, rubies, and other semi-precious gems are also selected by those who want something different.

Some also break away from the center-stone convention, opting for several smaller gems. These may be diamonds, other semi-precious stones, or a mix. Setting a ring with several smaller diamonds will reduce its price.

While engagement rings set with lab-grown are making inroads, they are a few percent of total sales.

Ditch the concept that someone is expecting you to spend three-month’s salary on a ring. Instead, get something that makes you and your beloved happy. Happy also means you can afford it. Remember, it’s about love!

Ultimately, sales data is not a matter of opinion, but of fact. Over the years, some very inaccurate engagement ring price figures were published, some of them exceptionally high. The source of these figures is surveys. If you don’t know what the sample size was, or how representative it is, there is a decent chance that the survey results are off.

If you are interested in developing a deeper understanding of bridal jewelry activity, we are here to help you. You can improve your competitiveness and profitability with accurate, granular data. For full engagement ring data, including sales, costs, YoY changes, and more, please contact us.