Diamond production in 2015 had mixed results. According to just released Kimberley Process figures, 127.4 million carats of diamonds were mined around the world, a 2.1% increase compared to 2014. The total value of production decreased 4.2% to $112.3 billion.

The rise in volume and decrease in value resulted in a decline in the average value of production. Prices fell 6.2% to $108.96 per carat.

Russia is by far the largest diamond producing country by volume and value. In 2015, the country produced 49 million carats valued at $4.2 billion. It’s followed by Botswana, which produced 20.8 million carats worth $3 billion.

Following Russia and Botswana, the next top diamond producing countries by volume in 2015 are Democratic Republic of Congo (DRC), Australia and Canada. The top five largest diamond producers by value in 2015: Russia, Botswana, Canada, South Africa and Namibia. 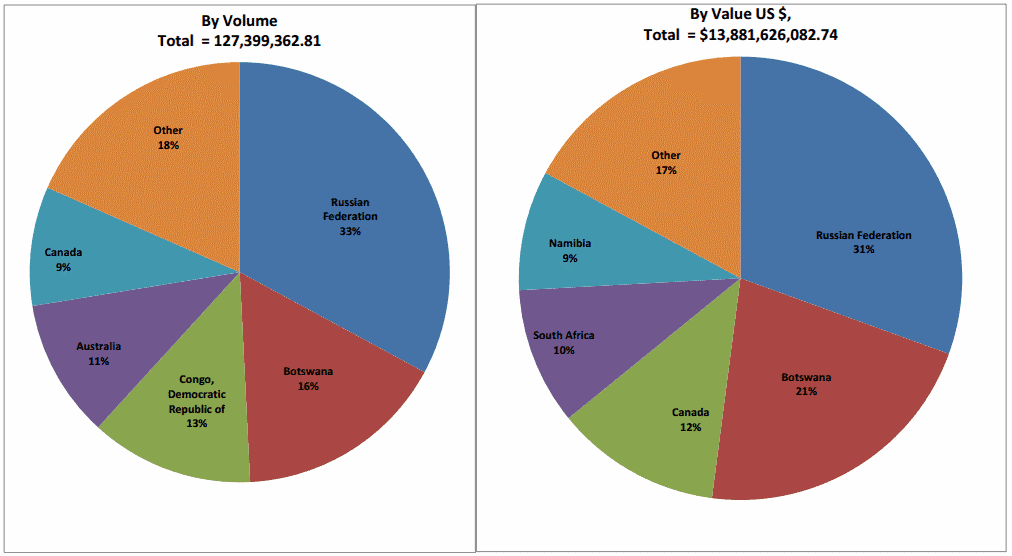 If you are interested in global rough diamond trade, including what impacts changes in this trade and the interplay with the Kimberley Process, than by all means get in touch with us.

What Diamonds are US Consumers Buying Today?
Be Real, Maintain Price, Don’t Be A Clone: Viva Las Vegas