Global diamond production increased 11.9% to 120 million carats in 2021. Usually, a rise in production indicates improved activity in the diamond industry. However, last year’s production fell short compared to 2019, and it was one of the lowest production levels in more than a decade.

According to the latest data from the Kimberley Process (KP), the total declared value of exports from diamond-producing countries was $13.99 billion. KP tracked production from twenty-two countries, down from twenty-four in 2020 and 2019.

Except for diamond production in 2020, the volume of production last year was the lowest since 2009.

In contrast, the total declared value of production was relatively high, as prices of rough diamonds soared last year, and the average value of global diamond production reached a record high – $116.53 per carat.

And yet, the 12% increase is only a recovery from the unusual drop in production in 2020, forced by COVID-19 and social distancing that led to mines shutting down. Compared to 2019, diamond production was still 13% behind.

This is part of a longer trend of diamond production slowly trending down. New rich resources are hard to find despite the many exploration projects currently in progress.

Again, this may seem to be good news for the diamond industry. But this is not as simple as just more money in the pocket. The rise in average value was not only a result of record demand. The cost of energy – oil and gas – skyrocketed in 2021, impacting cost of production. This can be seen in the steep increase in the average value per carat – up to a record $117.

Despite the rise in average value, a long-term trend analysis shows that the total value of global diamond production is possibly tapering off. The main reason is the decrease in the volume of production.

Can this change? Of course. A decline in supply may lead to price increases, pushing up the average and total value of production. The caveat is demand in an era of alternatives. In the case of the diamond industry, this means lab grown.

If the consumer market should prefer lab-grown over natural diamonds, the total value of diamond production would likely decline.

In 2021, Russia was the leading diamond producer by volume, a position it has held since 2014. And while the country remains a leading producer that supplies a third of the world’s production, in 2022, it is likely to lose that title due to the sanctions placed on it by the US following the invasion of Ukraine in February. 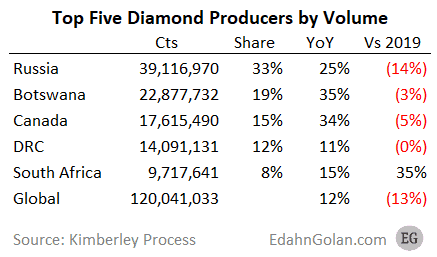 Returning to the top five is South Africa, which saw a large growth in production. Australia, which was a leading diamond producer by volume dropped out of the top five after production fell to near zero in 2021. The reason is the closure of Argyle.

Botswana headed the list of diamond-producing countries by value, supplying a third of the goods.

Boosted by the rise in rough diamond prices, the overall value production of the top five rose compared to 2019. Russia’s production suffered from a massive decline in value in the two-year period, down 23% versus 2019.

The decline is mainly due to a change in mix of goods coming out of the ground. 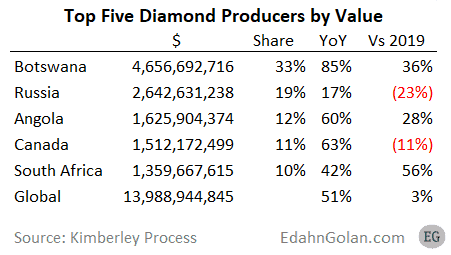 Collectively, the top five diamond-producing countries by value supplied 84% of the goods, a slight decline from 2019.

Some Issues That These Figures Expose

KP’s figures only cover legitimate diamond-mining activities. While the overwhelming majority of this activity is reported – unfortunately not all of it is. There are reliable reports that rough diamonds are being smuggled out of a number of diamond-mining countries.

One country where this is allegedly relatively commonplace is the Democratic Republic of Congo (DRC) . This is an ongoing issue. At one point, it was suspected that only a fifth of DRC’s production by value is reported to KP.

According to KP, Zimbabwe produced 4.2 million carats in 2021. However, it exported only 1.8 million carats. Without any extensive polishing activity in the country, 58% of Zimbabwe’s diamond production is unaccounted for.

There are always some differences between production and exports. That is mainly due to the time between extraction from the ground and until goods are separated, cleaned, sorted, and packaged. That is normal – but is that the case here? Not with a 2.5 million carat difference.

Resource-rich Venezuela, officially self-retired from KP, reported it produced just 457 carats. Some experts suspect it mined much more, and most, if not all of it, was smuggled out.

The repeated (and often delayed) forecast that production will fall and consumer demand will rise is starting to materialize. But will demand continue to grow? That is really in the hands of the diamond industry and its efforts to market diamonds to a generation of consumers that has concerns about the environment.

The average value of rough diamonds exported by producers was up to a record high against rising demand and energy costs. But is it sustainable? With a decline in polished diamond prices, producers may be forced to reduce prices.

Diamond smuggling may still be an issue. The industry is often viewed as being at fault, but the finger is usually wrongly pointed at the large producers and retailers. They really have no hand in this.

Smuggling is conducted by fringe operators and producing countries are those that let it happen, usually because of lack of care or corruption. More can and should be done to block this.

For more on diamond production and the trends behind these figures, please contact us.