Fine jewelry sales in the US posted a rise in November, and there are signs that December was alright too. In the last couple of weeks of December, Mumbai diamond traders had a sudden rise in sales, both from the US and China, leading to a burst of optimism that drove demand for Sight goods. De Beers in turn lowered prices – but is this the light at the end of the tunnel?

Fine jewelry sales in the US increased 3.3% in November, according to preliminary figures released by the US Department of Commerce. Although these figures tend to be later revised down, it is not likely to indicate a decline in sales. 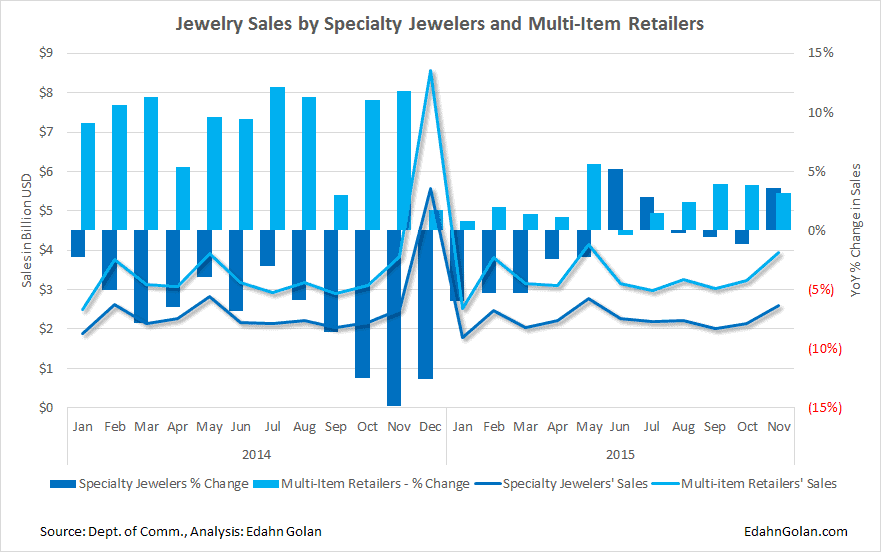 Total fine jewelry sales during the month are estimated at $5.78 billion, which indicates that fine jewelry sales in the first 11 months of the year increased 1%. Not stellar, but if you look at the development over the past year of changes in these sales on a year-to-date basis, you’ll see that the year started with a 1.8% decline and slowly turned positive. 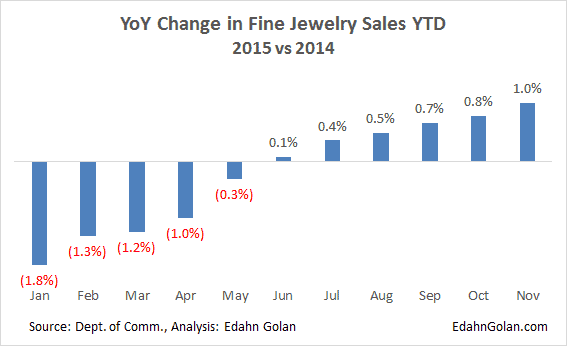 The festive season did not skip specialty jewelers, who also saw a rise in business activity. Their sales increased 3.6% year-over-year to $2.6 billion, according to preliminary census data. Once again, these figures tend to be later revised down, yet the increase was likely there.

So, was all the gloom and doom of recent months misplaced? Far from it. Sales dropped in the past year, and many businesses didn’t survive the past 14 months – not only retailers, but manufacturers and wholesalers as well.

Optimism Blossoms in the Midstream

The past year was especially bad for the very leveraged Indian diamond center. Past year losses due to bankruptcies are estimated by the market at $1 billion, and overall the banks are looking at writing off more than $2.5 billion for the past two years. Manufacturing was down some 40%, and the work force in the city of Surat reduced to about 300,000.

At its peak, about a million people were employed in different aspects of diamond manufacturing in Surat. And layoffs were not limited to there. In Mumbai too, companies, including some of the biggest, laid off people working at their headquarters as recent as last few weeks. According to one estimate, about 30% of diamond businesses in Mumbai have closed.

Polished inventories are still high, notably high for goods in the 0.07-0.01 carat range (Stars and Melee, as they are called in India). The reason is that business in smaller goods was hurt by fear of undisclosed HPHT lab-made goods. However, shortages are noted for so-called American goods, thanks to continued (albeit reduced) business in the US.

After many long months of operating in a very challenging and loss-making environment, a positive outlook is budding with the increase in wholesale polished diamond business that came as US retailers depleted their inventories of some goods in demand during the holiday season and Chinese retailers were stocking up ahead of the Chinese New Year in February.

Expect another “largish” Sight in February

The rise in consumer demand in the US, specifically for rounds, dossiers in 0.60-1 carats in VS-I1 clarities, took place in late November and during December, which prompted demand for rough in late December and early January, resulting in higher prices paid for certain rough, estimated at 4%-5%.

This situation, mixed with an expectation that De Beers will lower prices by an estimated 10%, has prompted a large demand in the market, mostly in India, for rough. Sightholders responded by asking for more goods than they did in December.

During the second half of 2015, there was a lot of talk (here too) about rejections, deferrals and other changes in delivery schedules with an eye on how Sightholders meet their purchasing commitments. Even with the current uptick, no one is imagining a good enough market that can absorb a $600-$700 million Sight. 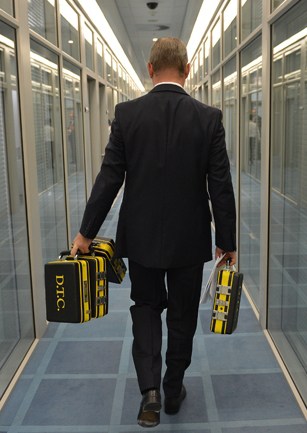 Sightholders asked for many goods, including ex-plan. This was prompted by the sense of optimism over an improving market, the opportunity to sell at a profit in the secondary market and also by worries about meeting the minimum buying threshold needed to retain a Sightholder status. Currently, the threshold is $15 million a year, but that could be lowered this year due to the recent crisis.

De Beers was only partially responsive, stating that it does not have many of the goods on hand. Yet, the Sight is estimated at this point at around $440-$450 million, including ex-plan and specials, nearly double the supply in December.

Prices have been reduced, but not by a 10% average. With assortments practically unchanged, prices were reduced on average by an estimated 4%-5%, maybe a little more. The sharpest decline seems to be with the Indian goods, with pique goods (rough resulting in I1-I3 clarity polished), down 6%-8%.

De Beers is fighting the leakage of box prices and has asked brokers to not put them out at least for Sight 1, but this request could be extended to future Sights. The reason is that hearing of changes in advance, especially of price reductions, causes problems. Recent media reports that stated price reductions larger than those that really took place prompted polished diamond buyers to demand lower prices. This is a negative trend working against one of the main efforts today – that of restoring and building manufacturers’ margins. At the best of times, these are in the lower single digits, compared to the 20%-40% margins producers and retailers have.

About 30% of diamond businesses in Mumbai have closed

Also, De Beers will supply a final Sight size in an official statement, something it has not done before. The idea could be that it does want to provide some information, but in a controlled way. Once again, after taking a serious bashing in the first half of 2015, De Beers is proving to be proactive and market aware. Fighting the publication of changes in prices is part of this effort of restoring the market and bringing stability.

A couple of days into the Sight, large-scale sales started in the secondary market. “Large” may be an overstatement; however, they were on a much larger scale than seen in the past year. The reason is simple: seizing an opportunity. Sightholders see that many in the market are interested in rough, and they are buying it only so they can resell it. The premiums are in the mid-single digits. Higher demand goods are trading at 5%-7%, and other goods are selling at a 3%-4% premium, near break-even.

This quick turnaround will generate a quick flow of cash for Sightholders, but what will those who buy second hand do with so much rough – bought at such a relatively high cost that much of it results in polished that is not in shortage?

Bringing it All Together

The rise in overall fine jewelry sales in the US and the demand for smaller goods indicate that the US market was interested in jewelry this holiday season, but not in the higher-end costlier items. This is underscored by Tiffany’s 5% drop in same store sales during November-December. At Signet, its mid-priced Kay posted a 7.2% increase in same store sales, while at its more higher-end Jared, same store sales were up only 2.7%.

After a very difficult year, we are looking at some positive movement, focused however on smaller, lower-cost items. When considering this together with De Beers lowering prices on the pique goods, I must ask myself – have I1 clarity goods weighing less than 1 carat really become the heart of the diamond jewelry business? If so, what has happened to the luxury item that diamond jewelry has always represented? This trend is no cause for celebration.

After Valentine’s Day and the Chinese New Year in February, the next diamond jewelry selling occasion will be in May, when Mother’s Day is celebrated in the US. With the gloomy global economic situation weighing down on all retail activity, the current optimistic mood may evaporate as traders find that weak consumer demand has not lifted. In spite of this fact, expect a “largish” Sight in February – with demand driven at least partially by the desire to meet the Sightholder threshold, and possibly resulting in a new glut.