De Beers announced on Tuesday that the total value of rough diamonds it supplied during the first sales cycle of 2016 was $540 million. This number, and the context in which it was revealed, requires some explanation. It is not the value of the Sight, but rather that and beyond. Just what does this number include? Basically, all the rough diamond sales that De Beers can put on its balance sheet.

The rough diamond business has ten annual sales cycles, approximately one every five weeks. In each sales cycle, De Beers, and now other miners as well, supply rough diamonds to the market.

Often the large diamond miners hold their sales during the same week – if not, then during the week before or after the De Beers Sight week. These miners include ALROSA, Rio Tinto and Dominion. Together with De Beers, they are the four largest diamond miners. 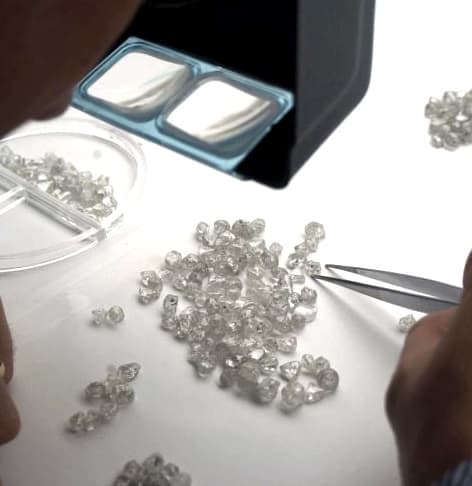 De Beers has several sales channels. The largest is to their Sightholders – contracted clients who each buy at least $15 million worth of rough diamonds annually. They are joined by the Accredited Buyers, which have second dibs on the offered goods.

The current estimate in the market is that De Beers sold a little over $490 million worth of rough diamonds via the Sightholder system. This includes sales of goods requested in advance as part of the pre-agreed upon supply between each Sightholder and De Beers (ITO), plus additional goods, either requested by Sightholders in advance or offered to them during the Sight. These extra goods include ex-plan, items they usually buy, but supplied above and beyond the ITO. In addition, Sightholders are also sometimes offered “specials” – very rare gem-quality rough diamonds weighing 10.8 carats or more, also counted here as part of the additional goods.

Specials can be very lucrative in terms of margins and are therefore very coveted by Sightholders. They are also high-priced as rough, which can greatly alter the total value of a Sight.

When speaking of “the Sight,” we are often referring to the International Sight, sales to clients from all over the world (currently from India, Belgium, Israel, US, Hong Kong, Switzerland, Japan and Dubai) that manufacture all over the world.

However, De Beers has a few additional Sights that take place at the same time. These additional Sights are for the purpose of local beneficiation – sales to polishing facilities in diamond mining countries. Sales to Botswana and Canada for polishing takes place together with the International Sight in Gaborone, Botswana.

In Namibia, both the mining company Namdeb and Namibia DTC, which sorts and sells the rough mined by Namdeb, are 50/50 joint ventures between De Beers and the government of Namibia. This means that the revenue generated by these companies is split 50/50 between the two. In DBCM, De Beers has a 74% stake, with the remaining 26% belonging to Ponahalo Holdings, a Broad Based Black Economic Empowerment (BBBEE) company. 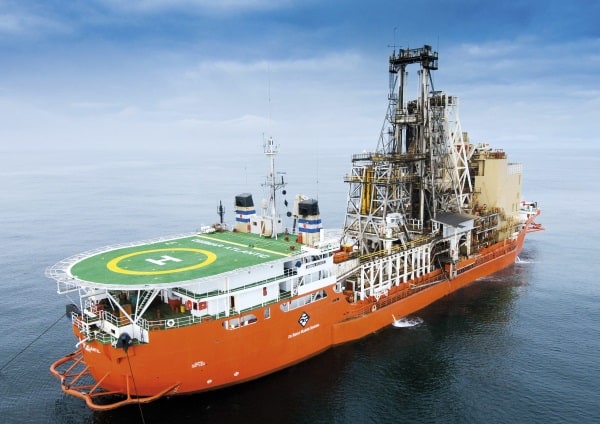 The Debmar Atlantic, moored some 35 kilometers off the Namibian Coastline.

In other words, when De Beers states that the value of rough diamond sales is $540 million, it excludes the revenue that goes to the government of Namibia or Ponahalo.

Altogether, about 90% of sales are through the Sights – global and local Sights together. However, that does not take into account other channels.

In addition to the Sights, De Beers sells rough through auctions. These are done through De Beers Auction Sales, formerly known as Diamdel. The goals of these sales are to: supply rough diamonds to companies other than the Sightholders, gather information about prices in the market and, more recently, vet future Sightholders.

Historically, about 10% of De Beers’ sales by value was sold through the auctions channel. However, there are a few other commitments that De Beers has made over the years relating to local beneficiation. De Beers not only sells rough to manufacturers in producing countries that they polish locally, it also sells rough to government sales companies. They, in turn, sell the rough locally too.

Two such government entities are Okavango Diamond Company (ODC) in Botswana and the State Diamond Trader (SDT) in South Africa. In 2014, De Beers sold about 9% of its diamond production to ODC, although ODC has the option of buying up to 15% of Debswana’s production. Debswana is also a 50/50 joint venture (with the government of Botswana), so if Debswana supplied $50 million worth of goods to ODC, as is estimated during this sales cycle, only $25 million is attributable to De Beers.

SDT has an option of buying up to 10% of DBCM’s diamond production, and in the first sales cycle this was negligible, according to insiders. Also, ODC and SDT don’t buy all of the goods offered to them, especially now, when the market is weak. 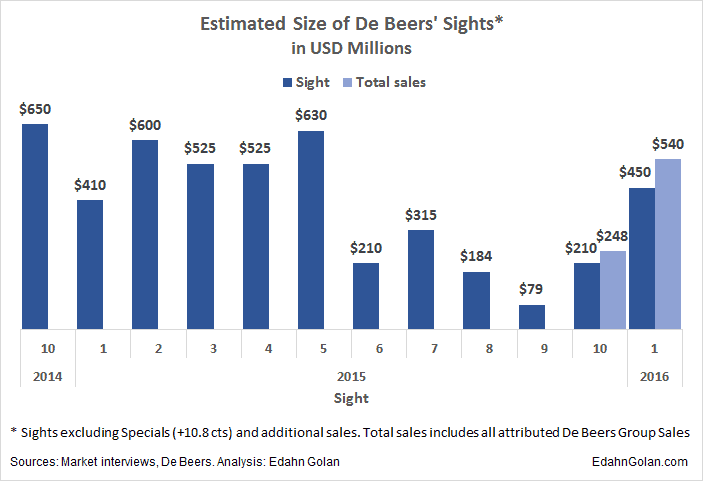 Rough diamonds sold by De Beers in the last sales cycle were really more than $540 million. This figure only takes into account what is attributable to its balance sheet and does not include revenue that goes to others, such as the governments of Namibia and Botswana.

On the other hand, the size of the Sight was less than $540 million. This $540 million includes in addition the local Sights in Botswana, Namibia and South Africa, the auction sales, and sales to government traders – ODC in Botswana and SDT in South Africa.

Which brings us to the bottom line. Based on De Beers’ own revenue only, the Sights are estimated at ~$450-$455 million, plus another $40-$45 million in ex-plan and specials for a total of $490 million, perhaps a little more. Another ~$20 million worth of rough were sold through auctions and the remaining ~$25 million worth of rough diamonds were sold to ODC. This brings us to a total of $540 million.

Not only De Beers sold rough this sales cycle. ALROSA, the other large supplier sold an estimated $400 million worth of goods, which brings supply to the market between the two miners alone to nearly $1 billion. Together with Rio Tinto, Dominion and Petra, the supply exceeds $1 billion. Current demand for the February sales cycle is also above the November-December demand, which raises a worry.

“Fresh” polished goods are always needed – they offer buyers the opportunity to get the cream of the crop. But let’s not fool ourselves. Demand from consumers is not that high, and we should fear another small glut.