American consumers spent less of their budget on fine jewelry, down 23%

Overall, the average US household spent on average $588 on fine jewelry and watches in 2014, unchanged from the prior year, according to our analysis. Although overall consumer expenditure is stagnate, spend on fine jewelry alone fell on average 23%. This further confirms reports from US retailers that pointed out a decline in business activity, especially in the fourth quarter of 2014. 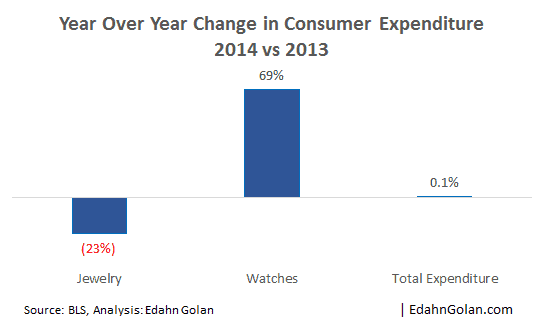 Based on the just released US Bureau of Labor Statistics Consumer Expenditure survey figures, the average expenditure on fine jewelry per household was $321 in 2014, down from $417. This is a significant, if not alarming, drop in jewelry purchases on the part of the American consumer. This drop in demand goes a long way toward explaining the current crisis in the entire diamond pipeline – American consumers simply spent less of their budget on fine jewelry.

Expenditure on watches, on the other hand, increased tremendously, leaping forward 67% to an average of $256 per household. While some cut their outlay on jewelry by as much as 70% and even more, others increased purchases of watches by five times what they spent just a year earlier.

One spending characteristic that seems to rise from the data is that many have decreased their spending, and only a few demographic segments have increased it.

We previously reported average household expenditure on fine jewelry and watches at $612 during 2013. This figure has been revised down to $588 to reflect updated data for jewelry expenditure in the US and will continue to be updated in the future. All figures below are based on the latest known retail performance.

Age: Decline of the Millennials

The surprising outcome of the 2013 consumer expenditure survey was the importance of Millennials as fine jewelry and watch consumers. In 2013, the 25-34 year olds were the age group that spent the most on this category. This trend did not last long, although they remain an important age group for the industry. 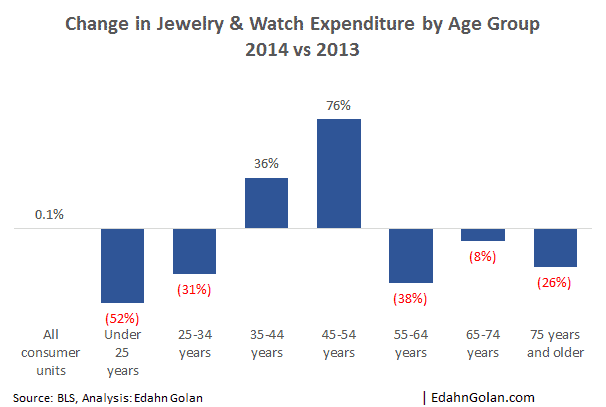 The age group that spent the least on jewelry continues to be those 75 years and older, who decreased their spending on the category by 26%. With two exceptions, all age groups decreased spending on fine jewelry and watches by 8% (65-74 year olds) to 52% (under 25). Only the 35-44 year-olds and the 45-54 year olds increased their expenditure.

Purchases varied widely by income bracket, which is not surprising. What is surprising is that households with an average annual income of $80,000 or less have largely decreased their expenditure on fine jewelry and watches – with one noticeable exception: Households earning $15,000-$20,000 more than tripled their spending in 2014.

Higher income households tended to increase their spending on watches, while decreasing their outlay on fine jewelry across the board.

Once again, one segment of a demographic pulled up the entire group. By education, the graduate, post-graduate and professionals increased their spending on watches that resulted in an overall increase of 80% in spending.

Conversely, those without a college degree cut their outlay on jewelry and watches by more than a quarter compared to the previous year. The sharpest cutback was by those who did not graduate high school, more than half. 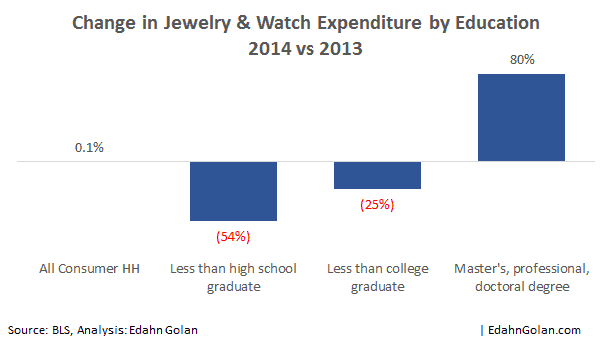 Looking at just some of the demographic segments of the US, the above portrays a difficult reality for the fine jewelry industry. Americans decided to spend a lot less on fine jewelry in 2014, and the wellbeing of the industry requires facing this dismal reality and considering how to change the tide.

There are many possible causes for the decline in demand for jewelry, probably a combination of them are at the root. Were polished diamond prices too high, marketing insufficient, other items more attractive, or perhaps designs less than appealing?

There may be external contributing factors, such as a weakening of the lower-income households versus a strengthening of the more advantaged demographic groups. One economic takeaway from this data is a growing disparity between the haves and the have-nots in the US, and their tendency to spend on watches and jewelry. Better educated, higher income households are increasing their spending, while most of the rest are decreasing expenditures on these luxury items.