Sometimes, when talking with Sightholders, they have a strong, even passionate opinion about their Sight supplies, prices and the state of the market. This happens at times of instability. At other times, their views are quite moderate, yielding to the market and everything that is happening in it at the moment. However, during a turbulent period, it is very rare when Sightholders remain subdued or accepting of the situation, as it is now, facing a diamond recession.

Currently, it is difficult to assess the size of De Beers’ Sights. The consensus among brokers is that De Beers offered about $600 million worth of rough diamonds, and another $50 million were requested as ex-plan. There was no clear trend to the prices, although many changes were made – both up and down.

The broad consensus is that assortments were different this Sight, many stating that they were lower, although a few claimed that boxes were improved. Generally, the combination of changed prices and assortments resulted in a mixed report – some said that prices were in effect higher, while others claimed prices were effectively unchanged.

This mixed view of the Sight may explain Sightholders’ uncontentious response. Maybe it reflects a loss of interest. Sightholders have accepted that the new pricing policy is here to stay and that their margins will be low for the long haul.

In response, many in the industry are taking cost-cutting measures such as scaling back operations or decreasing the number of employees. At the same time, there is more thought being put forward in marketing – and not just in advertising, but in ways to reach more potential clients and to increase current accounts, or in seeking new sources of revenue.

The need for these measures is not bypassing anyone, even the largest, most recognized and well-integrated companies. Perhaps that is what needs to worry those in the mid-section of the diamond pipeline. No one seems immune. The quarterly results of the public companies are testimony to that. If they are suffering, reports that small and even mid-size diamond operations in India are quietly closing operations and leaving the diamond industry is also not surprising.

However, most companies just can’t liquidate and close. They are so heavily leveraged that liquidating the operation won’t cover what they owe the banks. The owners are practically forced to keep rolling forward. This is part of the explanation why some Sightholders will continue to buy the Sight goods, even if unprofitable; this is not suicidal economy, rather it’s survival economy.

Of course, every business wants to be profitable, so when Sightholders arrive to collect the goods and see the prices, they are worried when they realize that profitability from them is a stretch. One broker said in this context, “They buy and cry – and that is exactly how De Beers wants it to be.” The rationale is that prices are at the max – high, but not at the point that the goods are left behind. If Sightholders are smiling, then there is profit that De Beers did not collect, “and they don’t like that,” he added.

A team from De Beers was in Israel this week as part of the periodic business review meetings. I’m sure they are hearing a lot of complaints. Also this week, online rough diamond broker Bluedax added a new feature to the sales report they circulate: all transactions deemed as a possible loss were marked in red. A couple of Sightholders reportedly printed that report and placed it on their table. They wanted De Beers to see that they are losing money.

Returns Were Not Large

Demand for goods in the secondary market was weak this cycle, and fewer boxes than usual changed hands. Prices were low as well, and the numbers indicate that many boxes were sold at a loss of about 1-2%.

The combination of lower demand, uncertainty in the economic viability of items in polishing and the potential losses in selling boxes in the secondary market calls for a certain level of returns. Returns are estimated in the low double digits, less than 15%, although some estimates peg the percentage much higher. De Beers “recycled” some of the goods, and the final tally puts returns at a high single digit.

The ITO (Intention To Offer) is the schedule of delivery of rough. It used to be that Sightholders knew in advance exactly when they would get their goods. This is very important for planning manufacturing and for working with clients. Knowing that you have a steady supply and when and how many goods will arrive means that you can make long-term plans. That was one of the best aspects of being a contracted buyer.

It also used to be that paying De Beers for Value Added Services (VAS), a charge of about 1.5% on the cost of the goods, was a payment for various marketing initiatives, seminars and related activities. Today, VAS is a charge to ensure your ITO – you get better service and priority over those who choose not to pay. Last year, De Beers sold $6.48 billion worth of rough diamonds. At 1.5%, VAS generated substantial added income estimated at more than $90 million.

Changes to the way the ITO works has resulted in uncertainty in getting the goods. At the last Sight, for example, there was an estimated shortage of about 10% in the expected ITO, mainly of the so-called Indian goods. This took away some of the certainty of when goods would be delivered and impacts the ability to make long-term plans. At the last Sight, this caused some disappointment, and according to one person, even great disappointment.

A loss of certainty in the ITO works contrary to the concept of a contracted supply, although one might argue that at times like these, not getting part of your ITO offers a certain whiff of relief, if not for all, at least for some.

The combination of price, availability and large supply is pushing many manufacturers to attend tenders to find the goods they want at prices that work better for them. Bid and win, and you have the goods you want at a cost of your choice. Lose, and you are not finding yourself with goods you feel are not generating the profit you desire.

The irony is that for years, Sightholders feared that De Beers would abandon the Sight system and replace it with a tender system.

Someone pointed out to me this week that the current polished diamond price deflation is the longest in recent history, probably since the large price crash in the early 80s. This is the longest diamond recession. Since their peak in August 2011, prices have been on a declining streak. According to IDEX Online’s diamond price index prices fell on average by more than 12%. One-carat round diamonds have lost more than 22% of their price since July 2011, according to Mercury Diamonds.

During the nearly four years that have passed since prices peaked, there were a few points of price increases, so technically it could be argued that this is not a continuous recession. However, if you consider the graph below, you will agree that the price trend has shown a decline in the past four years. 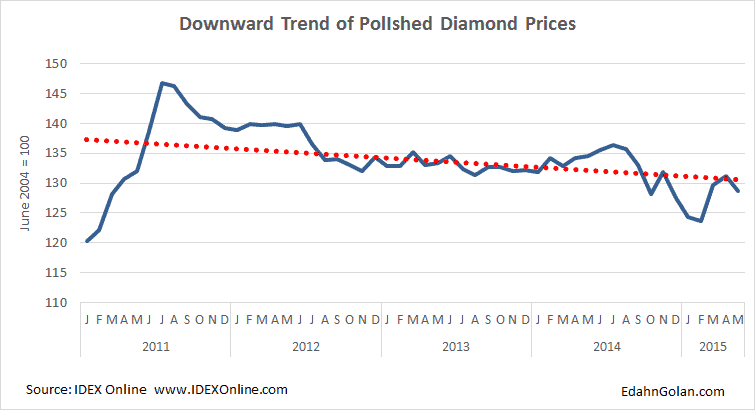 Prices tend to be fluctuating everywhere and for everything. The question is what happened to the price of rough diamonds during this same period. Overall, there has been a decline in De Beers’ prices since that time. For example, the prices of two important rough diamond boxes – Commercial 2.5-4 carats, used to manufacture 1-carat rounds for the US jewelry market, and Fine 2.5-4 carat boxes, used primarily for the Chinese market – were reduced during the nearly four-year period.

Fortunately, there was still room for profit during much of 2011 to 2013. The current industry crisis is one that has been fermenting for a while, but it has turned into an actual business-threatening situation in the past year, especially in the last six months. It is therefore worth charting rough against the polished it yields during the past year. 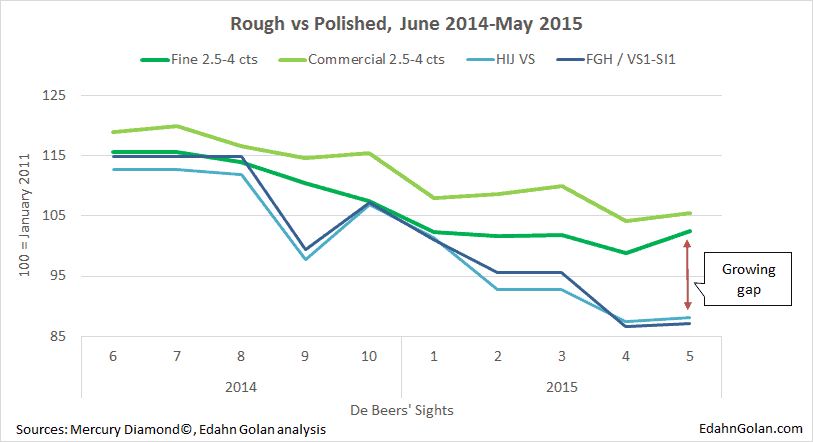 One-carat, HIJ/VS and FDH/VS1-SI1 round polished diamonds are mainstays of the diamond consumer market, polished from the Commercial 2.5-4 carat box and the Fine 2.5-4 carat box. Since June 2014, their price declined by more than 20%. However, prices of the two rough boxes were reduced only by 11%.

This puts this story in perspective. If nothing else, the graph above very clearly demonstrates how margins have been squeezed. The question on everybody’s mind is: where do we go from here?