If the cause is declining consumer share of wallet, then the effect is a sharp drop in rough sales. This means that we can expect rough diamond price reductions, fewer goods purchased at the December and January Sights, and bank financing to continue to be difficult.

To visualize the poor state of affairs of jewelry demand among American consumers, examine the following graph. It shows the percent spend on fine jewelry in the US, compared to total retail spend in the past five years. 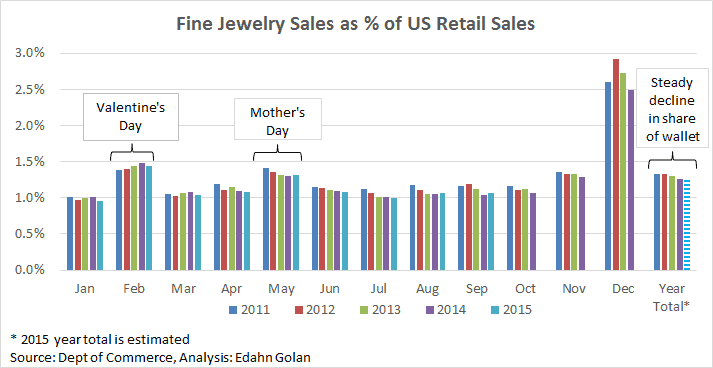 Reverberating upstream all the way to mining, consider the following graph, which lists the estimated size of De Beers’ rough diamond supply to the market so far this year. If the previous graph displays cause, than the next one shows effect: 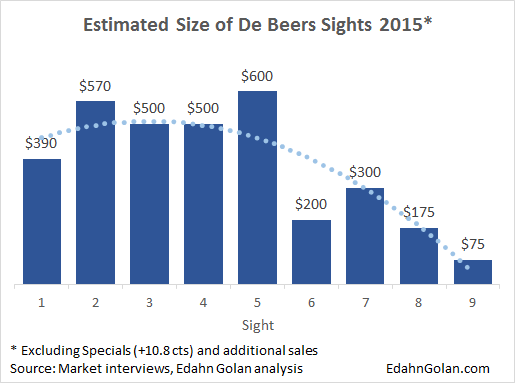 The first graph, total fine jewelry sales, contains a few important pieces of information. One is that over the past few years, jewelry sales relative to total expenditure has risen in February, when Valentine’s Day is celebrated. Since 2011, fine jewelry has been capturing more share of wallet during this time period.

In May, the trend goes in the opposite direction – fine jewelry sales have been losing share of wallet during May, when Mother’s Day is celebrated.

These changes in the past five years may reflect a growing tendency for engagements to take place on Valentine’s Day, which is fine because bridal is the backbone of diamond jewelry sales in the US. However, it is the decline in interest in buying diamond jewelry for other occasions that should worry the industry.

The third piece of information is the declining importance of the November-December holiday season for jewelry sales, which is no longer news. Even though fine jewelry is a relatively larger expense during the holiday period, especially in December, looking at it on a multi-year basis shows a general trend of declining share of wallet.

The data currently available on US jewelry sales extends only to September of this year – total sales for the year in the graph is my estimate based on sales trends in the first nine months of the year. So while total jewelry sales are expected to rise by 1%-1.5% year-over-year, compared to overall expenditure, fine jewelry share of wallet is actually declining. Americans, to put it plainly, are actually spending less on jewelry.

The good news is that in September, fine jewelry sales jumped 4.8% year-over-year to an estimated $4.57 billion, while total retail sales in the US increased by 2.3%.

There is surely more than one reason for the decline in relative demand for fine jewelry, which began in 2011, as the graph below shows. In 2011, polished diamond prices hit a record high. Another possible reason may be the fading effect of generic diamond marketing, which ended in 2009. 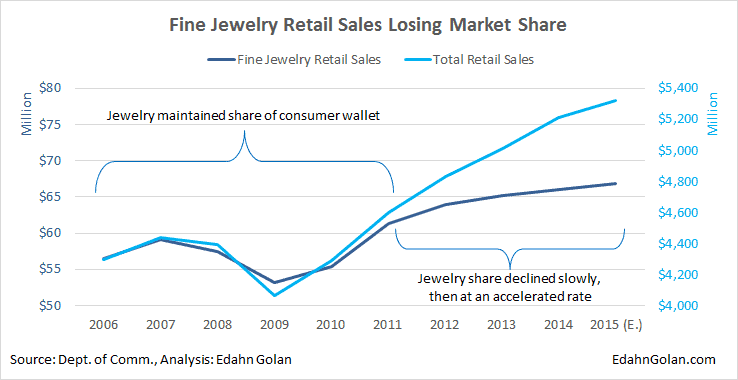 Finally, there is the continued painful issue of specialty jewelry retailers: After the improved sales in June and July, and the optimism it infused, in August and September sales fell again.

In September, sales at specialty jewelry retailers totaled $2.02 billion, a 0.6% year-over-year decline. In the first nine months of 2015, sales declined 1.6% to $19.96 billion. This is due to consolidation and store closures among other reasons.

Sight 9 is somewhat old news, but still worth considering. It is a telling story. Estimates range from $35 million to somewhere between $50-$100 million, sans specials, ex-plan and post-Sight sales, so let’s place the Sight at $70-$75 million. About $15-$16 million of this is by De Beers Auction Sales (formerly Diamdel).

To the best of my knowledge, there were no additional sales around the Sight. While De Beers gave Sightholders the option to defer 100% of their allocation, a large number of them (according to one account, about half) made some sort of purchase, although quite a few took only a single box.

Considering that demand in the consumer market is down and inventories are high, why buy anything at all? First, because in some areas there are shortages, such as in some SI goods.

At the Sight, De Beers allowed Sightholders to remove from boxes up to 20% of the goods, as opposed to the 10% allowed in the past. This gave Sightholders the opportunity to somewhat buy only what they needed.

Another reason is, reportedly, a need of some Sightholders to show their bank that they are active and able to work. It’s not clear if anyone made a purchase for the purpose of maintaining the size of their credit line.

Diwali and the market glut are not the only reasons why Sightholders did not buy goods. Manufacturers state that to be economical, rough diamond prices need to be reduced by another 15%. At the same time, there is concern that downward spiraling prices are bad, hurting retail.

Further price reductions are necessary, but should be moderate and limited in scope.

Therefore, while De Beers did not reduce prices at Sight 9, and is not expected to reduce prices at Sight 10 in December either, most hope, pray and expect that the company will reduce prices in January, after the holiday season is over. That will provide an opportunity to understand what replenishment needs retailers may have, and help them start to realign plans for 2016.

Against that backdrop, even though until recently De Beers and ALROSA were criticized for reacting slowly to the current crisis, now there are voices in the market criticizing the rest of the diamond miners, including the other larger ones, for rushing too quickly with price reductions. The criticism is that selling at any price hurts the value of diamonds and leads to destabilization in the market.

One major African supplier recently reduced prices by 10%-15%. Their supply of color goods was so large and the cost was so low that it depressed what little interest there was in the market for those goods.

Thus, the view gaining traction in the market today is that further price reductions are necessary, but should be moderate and limited in scope. The volume of supply should be cut as well. There is much lesser need for rough, despite the shortages.

Perhaps testimony of this last point is that after the small Sight in November, Sightholders were in “a little better mood,” as one of them put it.

Conventional wisdom holds that a 15% price reduction is still needed.

Also of concern is that De Beers generally ships the goods to Sightholders in sealed bags by box. This allows, although it is not intended, a Sightholder to sell the goods as is, sealed. In the past it was a good way for Sightholders to generate a quick and often lucrative cash flow. However, to further limit the current decline in prices, De Beers shipped the few goods that were purchased at Sight 9 unsealed. According to one account, this was done at the request of Sightholders.

The unsealed goods make it difficult to sell the goods in the secondary market. With boxes trading at a discount – below what Sightholders pay De Beers for them – complicating box trading impedes further price reductions. This also forces traders to consider every rough stone and to assess it instead of buying almost blindly a whole assortment.

In theory, the last Sight of the year should have been in access of $1 billion, based on the ITO. In practice, again up to 100% deferrals are allowed, so only goods that Sightholders need will be purchased. That said, a number of Sightholders do expect to make more purchases than those seen in November. While it is still too early to estimate how much more Sightholders will buy, demand is expected to be there due to growing shortages.

In addition to full deferral, De Beers will also again allow up to 20% removal from boxes. As noted, prices are not expected to change. Boxes may continue to be delivered mixed and open. 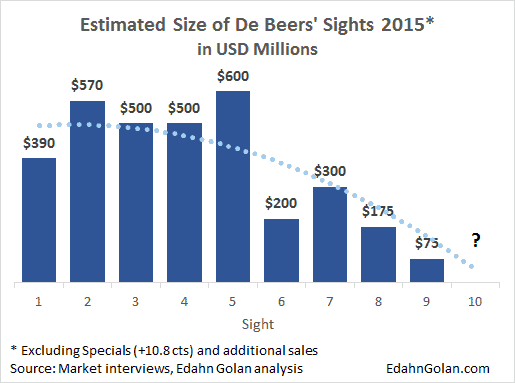 January is a very different story. Everyone understands that current rough diamond prices are not sustainable, and demand is strong for miners to reduce prices so manufacturers are finally able to return to profitability. Conventional wisdom holds that a 15% price reduction is still needed.

The belief is that De Beers will reduce prices in January, though probably not in a very obvious manner. One way of doing so is by changing the composition of the boxes, which will make price comparison difficult.

Considering the volume of supply is also of great importance. Clearly, if supply is radically reduced, inventories will dry up, shortages will be more prevalent, demand will grow and that will support prices. This gives rise to the idea that De Beers will cut the January-March ITO (Sights 1-3 of 2016) in some way. The next ITO will need to be relatively smaller as well.

Therefore, even with the expectation that De Beers will cut prices by 10% in January, it may be a much more subtle move than that. We must also remember that there is another important player in the market – ALROSA.

The leading diamond financing banks are not increasing credit. They are reducing it wherever they feel appropriate.

ALROSA, despite reported pressure to prop up current prices, if not outright raise them, also needs to reduce prices to meet current polished prices. To that end, it too is expected by its contracted clients to reduce prices. Currently, its prices are also some 10%-15% too high, according to its clients, and a sharp reduction in price is necessary to allow these clients to restore profit-making margins.

It may be painful for miners due to their high mining costs; however, for the industry’s future, they will have to bear some of the burden too.

It used to be that ABN AMRO and Antwerp Diamond Bank (ADB) provided 100% financing for Sight purchases. In mid-2013, in response to runaway rough prices, including +20% premiums for DTC boxes in secondary market trading, they decided to reduce financing in a move aimed at cooling the market.

Financing was limited to 70%-80%, and they never restored full Sight financing (ADB has since closed). Today, this figure stands at about 70%. One banker wrote in an email at the time, “As a bank, our biggest concern is indeed the lack of profitability of the midstream companies that we are financing. And it is not our goal to finance our future NPAs [Non-Performing Assets].”

As you may recall, at the onset of the current crisis, many diamond companies stated that their biggest issue is financing. If there is any expectation that financing will improve, these hopes may be dashed.

Currently, the leading diamond financing banks are not increasing credit, with the aim of reducing it further wherever they feel appropriate. This reportedly is especially true for Standard Chartered Bank, an important industry financier.

From a banking perspective, one of the reasons many companies are finding it difficult to survive the current crisis is that they are over-leveraged, a good reason to reduce financing.

To rise out of the crisis, midstream companies will need to rely on alternative sources of financing, self-financing or improved efficiencies, which may be difficult in manufacturing. This strategy is based on the fact that the banking business, already a low risk one, is seeking to even further reduce their risk.

This is the Lost Year in Rough Diamonds
Waddling Forward, Will Sight 9 Total Less than $100 Million?
Comments 9