After reaching a historic record high in 2017, consumer prices of fine jewelry have softened so far in 2018. However, jewelry retail prices are still high, which may explain a number of consumer trends. Are these prices fueling demand for lab-grown?

We know that the US market is very price sensitive, and that dictates polished diamond prices, as well as jewelry design. For example, lighter designs do better when gold rise.

Jewelry production costs have risen almost without interruption since the start of the millennium, as reflected in the changes in the Jewelry Producer Price Index (JPPI). They declined in 2013 and tumbled in 2014 – an atrocious year for not only diamonds, but for the entire jewelry industry. In the last two years, costs rose again, before they declined this year. By the way, although the index refers to “producers,” it really means manufacturers, as it relates to fabrication, rather than mining costs.

It is important to note that even though there was a sharp decline in costs in 2014, costs were still high before they bounced up again, as the following graph shows. The squiggly line in the following two graphs depicts the multi-year trend line.

US jewelry consumer prices also have fluctuated over the years, as reflected by the Jewelry Consumer Price Index (JCPI). While, historically, prices were relatively stable with continued, albeit shrinking, growth, since 1990, prices first declined and then started fluctuating wildly.

Once we overlay consumer prices over producer costs, it becomes clear that they act in near unison, which is not surprising. However, what is surprising is how, over the past few years, manufacturers pushed up prices, and retailers did not match these increases.

So while manufacturers talk of eroding margins (and they are eroding), we see that retailers are also suffering from the same erosion.

There were two important contributing components to these rising and declining costs – changes in gold and diamond prices. Diamonds more closely correlate to consumer prices and manufacturing costs because they constitute a relatively large component of the total cost.

And while jewelry manufacturers can change a design to require less gold, in the past they seemed less inclined to drastically change the diamond component. This may have changed lately, as the following graph illustrates. 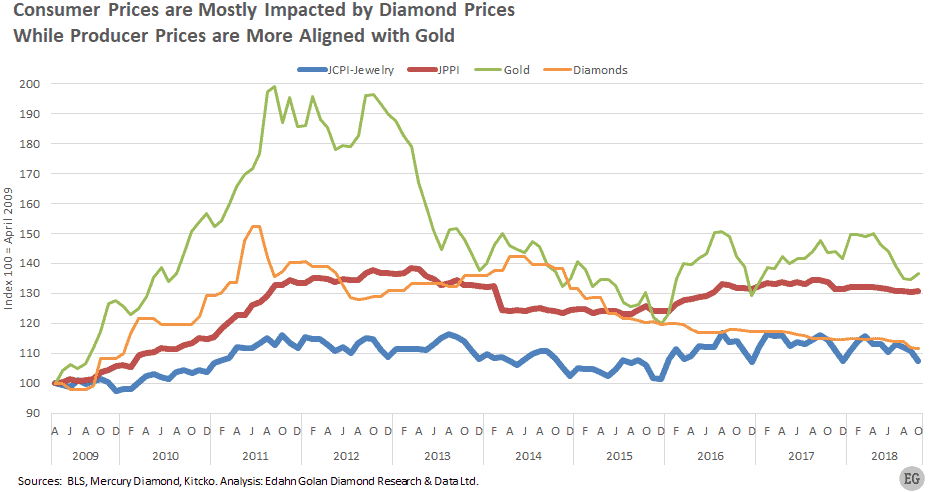 What Does This Mean?

As we haul through the holiday season, it is important to remember that the consumer is the ultimate judge. They will shift their buying to other products if they don’t get what they want for the price they are willing to pay.

In the past few years, American consumers have told retailers that jewelry retail prices are high. This was one of the explanations for why consumers turned to lower cost alternatives such as lab-grown diamonds. The American consumer market was always good at shifting their tastes when an item became too pricy. We saw such an example with the shift to princess-shaped diamonds when rounds were too expensive.

Therefore, it makes sense to pay attention to a number of trends emerging from the cost and price data as consumers shift their purchases to fashion jewelry, lower cost fine jewelry, and lab-grown set jewelry:

Steps That Will Preserve Consumer Demand