What an unusual period we are in. Looking back a month, everything appears to be upside down. Rough diamond imports were out of sync: values were up, but not volumes. Polished diamond exports ahead of JCK were lopsided. Polished diamond prices eased instead of rising, but rough prices increased. Are these signs of a normal market, or of a diamond market in chaos?

The market has been chaotic. The JCK Las Vegas jewelry show, with the satellite Couture, Luxury, and a few smaller ones did not generate the kind of excitement we expect to see from the leading trade week in the most important market for diamond jewelry. 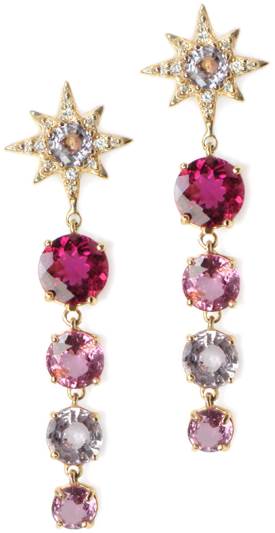 The subdued mood was most evident in the loose polished diamond section of JCK, where traders stated that business was not good.

At the end of the show it became evident that the show was mixed for diamond wholesalers: the larger firms and those that lined up appointments in advance reported good business.

In fact, one company said they’d had the best JCK show in more than a decade. Yet, many others, especially smaller firms lacking deep ties with a large number of potential buyers and having a limited number of regular clients, did not do well.

Overall, most had a better show than last year, but far from anything spectacular. For starters, visitor traffic was low. Seeing sparsely populated aisles always worries exhibitors, and justly so.

There is a cliché about low visitor turnout at trade fairs – fewer people, but higher quality. Those that do attend are there to do business. This year, there was a lot of truth to that because of the circumstances: the dates included no weekend.

The show gives many independent retailers an excuse to come to Vegas on vacation and bill the expenses to their business, so attending the trade fair is not the only reason they make the trip. But even if you stroll into a show perfunctorily, you encounter opportunities, which can turn into business for exhibitors. Without the weekend traffic this year, exhibitors at JCK missed out on these business opportunities.

At Couture, matters were quite different. Exhibitors reported good business, proving once again the resilience of the higher-end part of the market.

The first impression is interesting, but the second is important.

More Chinese buyers making an effort to come to the US instead of focusing only on trade shows held in China and Hong Kong says a lot about their needs. First, this tells us that the Chinese consumer market is evolving, and retailers are forced to expand their search to find new designs for their clientele.

Second, it tells us that Chinese buyers are expanding their businesses, and with it gaining a broader, more global view of the jewelry market.

Finally, there is possibly a cost issue, and Chinese buyers are looking for higher-end designs, but at a lower cost. How can higher-end be lower cost in the US compared to China? Design.

Three design trends that stood out, especially at Couture, were layered bib necklaces, color and a growing use of smaller diamonds – trends driven by a desire to appeal to millennials.

Many display cases had multi-strand bib necklaces, mostly in gold. The strands were uniform and clean, creating a visual affect that was popular among buyers. 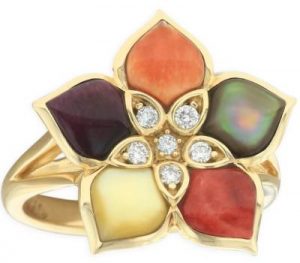 The color component follows a growing trend in dress design – as two different designers pointed out, younger women are wearing more color.  In a way, many of the designs at the show were “busier,” with a lot more design elements and detailing as reflected in the multi-strand and color trends.

The trend of smaller diamonds stood out. Several designers specifically stated that this is part of their effort to appeal to young adults. Of course, with smaller diamonds also comes lower cost and lower price point. The price point clearly appeals to millennials and, I suspect, to a growing base of Chinese consumers as well, a trend worth noting.

The interest of American consumers in lower price point jewelry items has been standing out for some time. If a jewelry design is to be set with diamonds and have a lower price point, it dictates that the total weight and size of the diamonds be lower.

In mounted goods sold by specialty retailers in the first four months of the year, the share of diamonds weighing 0.10-0.19 carats increased almost 10% year-over-year, while the share of 1.00-1.04 carats dropped nearly 20%, based on data collected by NPD’s Diamond Tracker service.

The share of loose diamonds weighing 0.10-0.19 of a carat increased by more than 23% year-over-year, as the share of almost every other size range below one carat declined. The sole exception was the 0.80-0.89 carat range. Loose, in this context, are goods retailers bought either to create custom items or to set in a semi-mount.

Considering the changes we are seeing in the consumer market with diamond jewelry, it is safe to say that the trend of smaller goods will be around for some time. This, in turn, drives down the total value of goods sold by the wholesale market to American specialty jewelry retailers.

Polished diamond prices have been relatively stable, but the trend of slowly sliding downwards continues. According to IDEX Online, asking prices of 1-carat rounds declined 0.8% in May, Rapaport reported a 0.3% decline and Mercury Diamond’s MDGT says actual prices are down 0.2%. Looking at all goods, the IDEX index of asking prices is down 0.7% month-over-month and MDGT is down 0.2%. These figures are wholesale and reflect the global market. In the US, specialty retailers are focused on a narrower band of goods, mainly GHI colors and SI-I clarities, but the overall trend is not much different – wholesale prices keep sliding. 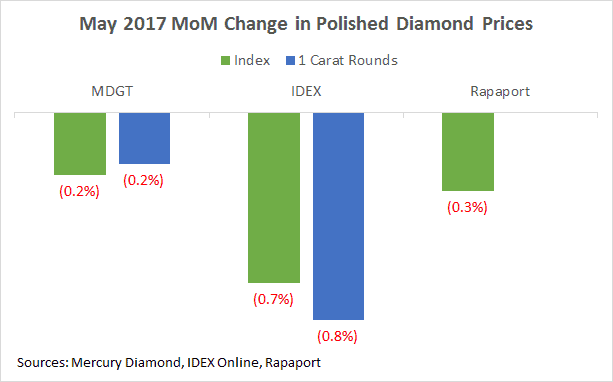 As for Belgium, Antwerp trades in high value polished. In May, the average value of polished diamond exports was $2,658 per carat (p/c), up 28.4% compared to April. Prices in the market did not jump by that much. The high increase is a reflection of the change in the mix of goods exported.

To get a better sense about the trade, look at total value and volume: Value jumped more than 44% to $1.12 billion, and volume rose more than 12% to 422,711 carats. Maybe a good number of very high-value diamonds were exported, pushing up value but not impacting volume as much.

There is a JCK effect at play here. Usually, exports rise in May compared to April because of the show. This year less diamonds but higher value goods were shipped to Las Vegas from Antwerp: Year-over-year, the value of exports inched up 1.4%, but declined 12% by volume.

At the same time, polished imports were on the rise compared to April, maybe in expectation of a turn in the market. Year-over-year, the change was not as pronounced.

In India, the polished diamond trade was in line with cyclical trade: exports were up double digits, although the average value sunk 17.3% to $609 p/c as exports by volume shot up compared to the rise in value. Compared to May 2016, exports increased, but at a mellower pace, although once again, we see a decline in average value.

This is a trend that better reflects changes in the consumer market – a shift towards lower value goods.

Where do matters get into disarray? As always, in the rough diamond market. Ahead of the De Beers June Sight, several Sightholders were already offering boxes that they decided in advance not to manufacture. This is not unusual. Sometimes a regular order is not there, or the manufacturer decides that there is already more than enough of the polished outcome to meet demand. At times, they expect demand to slow down, or that there is some other financially-related reason to prefer selling over manufacturing.

The asking premiums for the boxes offered ahead of the June Sight were 6-13% above the then unknown cost. Business seemed brisk, and goods were snatched at premiums ranging largely from 3% to 10%, according to Bluedax and others.

In a market of continuously declining polished diamond prices, the cost of rough should follow suit, or at least so goes the theory in a pure-play market. The explanation for the willingness to pay more for rough is found in other realms. What is driving this decline?

Partially, the level of supply from De Beers. The diamond miner maintained a supply level of about $548 million in the last four supply cycles. In June, the supply was about $530 million, below average.

The limited supply has resulted in manufacturers, mostly in India, finding themselves pressed operationally (factories must run, and at least at near full capacity) and psychologically. The demand fever is being starved instead of fed. A large company has a flow of operations, and a shortage is a disruption that causes companies to seek out supply, even at a higher cost. As always, where there is demand, there is supply, and other Sightholders are happy to oblige for the handsome and quick cash flow.

De Beers is not “gaming” the market. South Africa’s minister of minerals, Mosebenzi Zwane, decided to revoke a levy exemption granted to De Beers under the Diamond Export Levy Act. The reason for his move is not clear. According to reports in the South African press, De Beers more than met the obligations to earn the exemption.

So while De Beers is going to court over the revocation, rough diamonds from its South African mines are reportedly not being added to the regular mix, and the goods the company is selling lack these relatively lower cost goods. The result – Indian firms are mainly those suffering from the shortfall.

Underscoring this, India’s imports of rough diamonds increased 7% in May compared to April. In Antwerp, imports increased more than 50% month-over-month.

Trade between wholesalers and retailers is slow. It is clearly a buyers’ market, and this impacts costs. Wholesalers have diverse and rich inventories, and rarely anything is missing. At the same time, there are many items that retailers are less interested in, and wholesalers need to figure out how to move them. The balancing game here is interesting: retailers will buy items that are in demand, but won’t pay more for them, resulting in steady prices. For goods not in demand, wholesalers are unwilling to lower prices because the cost of replacement in a market of rising rough prices does not allow them to compromise.

Retailers are backed by a very specific set of consumer demands. American consumers want very specific designs, in certain qualities, at defined price points. If diamond jewelry does not meet the right definitions, consumers simply move on to other jewelry items in the name of maintaining their low price point.

Downstream hardship is not deterring manufacturers from buying less rough at higher prices. This is a bottleneck issue. Once matters in South Africa are resolved, some of this pressure will be alleviated.