The Las Vegas trade show not only spotlighted where the problems are in the diamond industry, they also showed where positive change activity is taking place, possibly signaling the way for the rest of the industry. The JCK Las Vegas and Couture shows started with a certain degree of promise, and even though they suffered from low foot traffic, they did provide some hope.

Here are a few insights:

Walking through the hallways on opening day of the JCK Las Vegas trade show, diamond traders expressed optimism. Some may argue that salespeople are by nature optimistic folks; however, in this business, it seems that salespeople are usually realistic. The source of this optimism may have been a belief in the US market, as well as a feeling that prices of polished diamonds have reached bottom. If this is so, then there is no point for retailers to hold out for further price declines.

2. US Okay, The Rest Of The World Slow

Repeatedly, traders stated that they were not so much worried about the US market, but about sales in the rest of the world. Demand in China and Hong Kong is suffering from a continued slowdown and other markets, such as Japan, are reportedly expressing lower demand for diamonds.

In the US, on the other hand, demand is at a slow but continuous pace. As the largest consumer market, the volume is there. And currently, that is what traders are looking for – volume that generates a steady cash flow.

3. Prices Bottomed, Wholesalers Are Protecting The Value of Their Inventory

In the drive to generate cash flow – and in a textbook response to declining demand – wholesale prices of polished diamonds declined, brought very near to the point of complete loss of margins (and in some cases, past that point, according to polishers) in the past few months.

The general sentiment at the Las Vegas trade shows was that prices should not be allowed to slip down any further. Wholesalers want to protect their bottom line and the value of their inventory for obvious reasons. More than that, they are showing confidence in the value of their product. This is very important. At some point, they need to refuse lower prices or risk losing the confidence retailers have in it. This confidence is eroding anyway at the consumer level and needs to be addressed on different fronts.

4. A Growing Realization That Enduring Economic Diamond Value Needs To Be Addressed 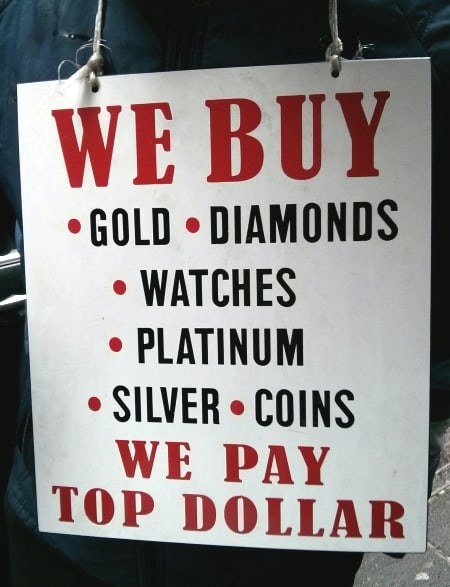 Partially, the problem with diamonds is that they are perceived as an unnecessary product, unlike food or shelter. However, diamonds can have other worthwhile qualities, such as enduring value. Therefore, more people in the industry are feeling that the resale value of diamonds is a topic that should be addressed.

For starters, one popular myth that must be busted is that diamonds are not worth much, “proven” by the low price a consumer gets when trying to sell back a diamond to a store. The real myth is the expectation that after you buy a diamond at retail, you should be able to sell it back to a retailer for a premium price above retail. Obviously, that goes contrary to the retail business model – buy low, sell high/buy at wholesale prices, sell at retail prices. The expectation of getting back a full retail price plus a premium is just not realistic.

That said, at least some retailers are taking advantage of consumers’ lack of knowledge and are paying them much less than wholesale price when buying back old diamonds. I’m being cautious here. In some cases, dishonest practices underlay wholesale prices and the price the consumer was actually paid, creating a very negative sentiment in the consumer market, and this reality is coming back to bite us in the lower back regions.

More people in the diamond industry, wholesalers and retailers, are coming to the realization that a middle road must be found. Consumers should learn which diamonds have good resale value, as well as a way to track and find out what their true value is over time, and this must be done without breaking the traditional retail model or over- commoditizing diamonds to the point that the romantic proposition is lost.

During a panel at JCK, Forevermark CEO Stephen Lussier said that when they spoke with owners of high-end diamonds, there was a need to extend the discussion “beyond the 4Cs,” that is to say, to explain other attributes of a diamond that impact its value. This is a bold statement from a De Beers VP, especially the Veep in charge of De Beers’ retail brand. De Beers appears willing to shift the discussion with consumers away from the notions of the diamond as merely a symbol of romance, enduring love, etc. and into the realm of commodity.

5. Talking About The Need For Marketing Is Finally Turning Into Action

Ever since De Beers ended the generic diamond promotion marketing campaign “a diamond is forever,” many have been asking, demanding, pleading, even begging for the company or any other entity to pick up the initiative and to promote the diamond category for everyone’s benefit. Until now, and with only one exception, the demand was that somebody, anybody, take care of it. All of a sudden, there are now several initiatives in the works.

First, this is the end of the demand that “someone” will do it, and the beginning of taking responsibility for it. If no one else does it, then let us think about how we can do it. That alone is refreshing. The initiators include a group of miners, a group of industry activists and small groups of traders thinking of specific issues among others. This is an important change. I guess when your back is flush against the wall, change does happen.

Buyers attending the Las Vegas trade show were very price conscious. One reason is because retailers, just like wholesalers, are keeping a very tight control on their expenses. The diamond industry, all the way down to the retailers, is experiencing a decline in sales. Another reason was that buyers attempted to get the most out of the situation and to see if they could negotiate prices down by another point or two.

7. Retailers’ Inventory Levels Are High (But Not Necessarily With the Right Goods)

Wholesalers are not the only ones struggling with inventory issues. Wholesalers may be surprised to hear that retailers too are suffering from a similar problem. What they bought a year ago is largely still in the display cases and aging. Their inventories are not in sync with sales, and this is tying up assets, not allowing them much flexibility in revitalizing their offering with fresh goods.

8. Sales Were Not Spectacular, With Some Exceptions

Rounds, one carat and smaller, were not moving well at all, and selling prices were soft at the JCK Las Vegas trade show. A couple of companies specializing in fancy shapes reported decent sales, especially for Cushions and side stones. This may reflect an interest in something “different,” an item that may catch the interest of consumers who are not captivated by the traditional items.

On the other hand, bigger goods did better, part of a wider trend of higher price items. It seems that the higher-end segment of American consumers is still buying diamonds. They have both the budget and interest. This bodes well with the decent business seen at the Couture trade show. Branded and stylized designs at both trade shows did well, pointing to a dichotomy in the retail segments – high-end is moving, as consumers find these goods worthwhile. In contrast, price point sensitive items are not doing well at all and desperately need marketing support.

In a way, this is a surprising trend. For many months, retailers are reporting that they are selling proportionately more items that cost less, so why are they stocking up on higher price-point items? One possible answer is that higher end is doing well, the mid-range is stuck and lower cost items are plentiful. 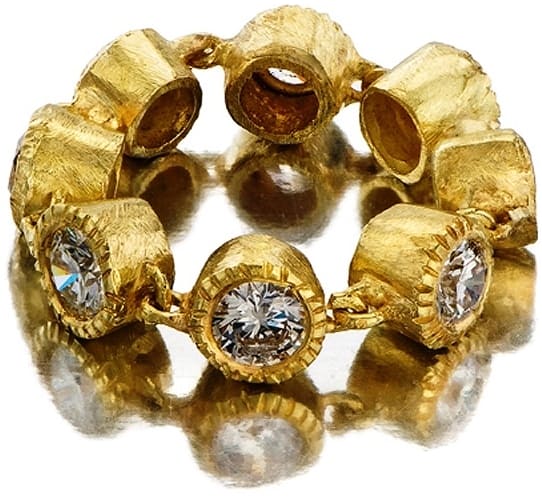 9. Handmade, One of A Kind Design Is Hot at All Las Vegas Trade Shows

Well-designed items are capturing the attention of consumers and generating sales. It is about differentiation, offering something new and different (yes, “different” is important) with high-quality production. It makes a big difference.

Of these, the handmade one-off type of designs are doing especially well. The reason could be, again, differentiation. Stepping away from a mass-produced item – even if well designed and of high quality – provides even greater uniqueness. That is what is generating sales today.

The Coronet electric Gibson guitar, placed at a strategic location at the JCK Las Vegas trade show, had a constant stream of gawkers and was a star attraction. Set with 500 carats of diamonds and valued at $2 million, it had it all – a story, style, eye catching design. In short, it was different, novel and unique – the entire diamond story with steel strings and a fret!

The Jewelry Retail Challenge: Think H&M
Economic Indicators – Just What Are They Indicating?